Qingce Stir Fry is a dish from the game Genshin Impact prepared by stir frying Mushroom, Lotus Head, Jueyun Chili and Cabbage in high heat. Its crispy, its spicy and the tingle of chili titillates the tongue.

Do you use Google Trends? I do and quite heavily, I use them to see what trends there are in the domain of food, one of my subscriptions are recipes and this is where I got to know my post for today, the Qingce Stir Fry. At first, I was intrigued when I saw this trending on Google as I never heard of this, so I immediately searched it up and there are actually no recipes for it, it is not even a real food. So what is Qingce Stir Fry? basically it is a food item that the player can cook in a role-playing game called Genshin Impact that can be played on a smart device, PlayStation and Nintendo Switch, it’s a game where characters can basically do anything like any fantasy open world environment and one of them is cooking this recipe. This dish, depending on the quality on how it was made on the game can increase the players ATK or attack, basically how they deal damage to an enemy. So how do you obtain its recipe, apparently from this Wiki site, the recipe for Qingce Stir Fry is obtainable from Ms. Bai in Qingce Village for 5,000 Mora, the games currency. To cook them several ingredients need to be gathered.

On preparation there seems to have three options, called normal, delicious and suspicious. In Normal the game states

A dish cooked over a roaring fire. They say it was originally just a rustic dish that everyone in Qingce Village knew how to make. But quite unexpectedly, its crispy and spicy dishes gained the recognition of people from elsewhere, and thus began to spread throughout the Liyue region.

A dish cooked over a roaring fire. Just catching a whiff is enough to work up one’s appetite. The tingle of chili titillates the tongue. leaving you ready to devour ten bowls in a single sitting.

and for the Suspicious it says:


A dish cooked over a roaring fire. This one was a failed test run, being unpleasantly bitter and uncomfortably spicy. You could try mixing it with rice – or you could simply discard it and eat the rice instead.

Ingredients to be gathered includes Mushroom, Lotus Head, Jueyun Chili and Cabbage. So there is where we will be basing our real recipe for today and to validate that we will be also referring to the foods photo from the game. 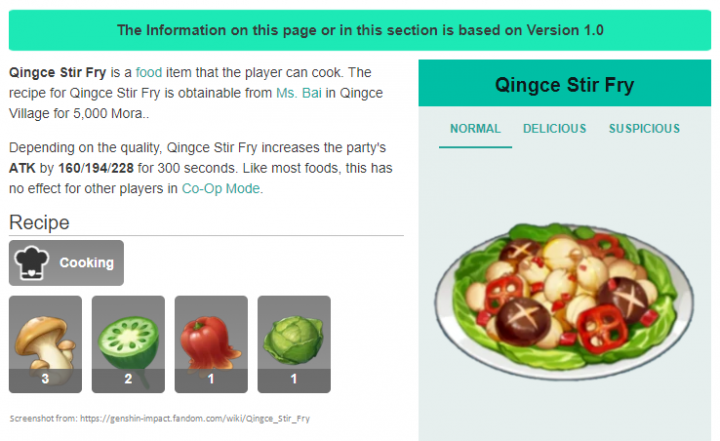 Using those four ingredients alone won’t work so I added some bits to it to make it “Delicious” and not “Suspicious”. I will be using shiitake mushrooms since that’s what it looks like from the games picture, for the Lotus head, I think it is referring to the lotus seed since the photo looks like it, not the common part which is the lotus bulb. Lotus seed is quite a hard ingredient to find so I replaced it with water chestnuts, so it will have the same crunch and texture. For the chillies, I will be using the sweet chillies since Jueyun Chilies are virtual, and for cabbage it will be the savoy variant since the games photo is quite green. 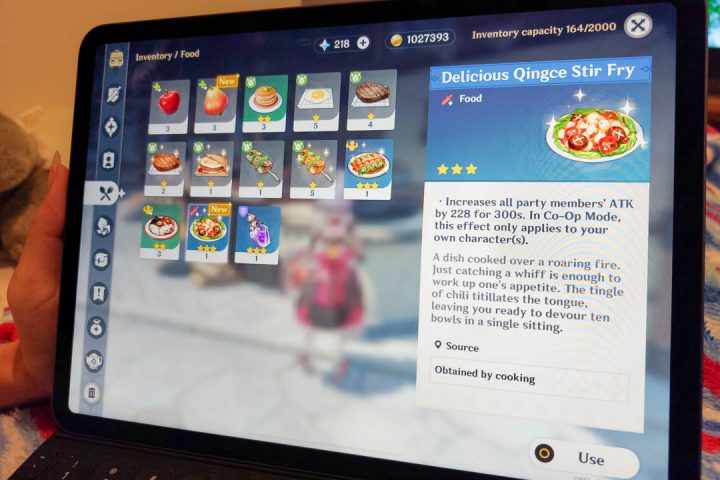 The stir fry on the name gives a lot of clues on how the game makers envisioned them, so I will be stir frying it Asian style, with Asian aromatics. Now will that be enough to make this exciting, not quite yet, and in my typical Ang Sarap style, protein needs to be involved so I adapted it and added some prawns, so here is how it went, and yes, its delicious.

This was a good experiment, this was my first time making a food that came from a virtual environment and bringing it to life, I won’t try if it will increase my ATK but one thing for sure it will increase my APT (appetite). What’s your thoughts on this one? Do you think I represented the virtual dish well?

Qingce Stir Fry is a dish from the game Genshin Impact prepared by stir frying Mushroom, Lotus Head, Jueyun Chili and Cabbage in high heat. Its crispy, its spicy and the tingle of chili titillates the tongue. 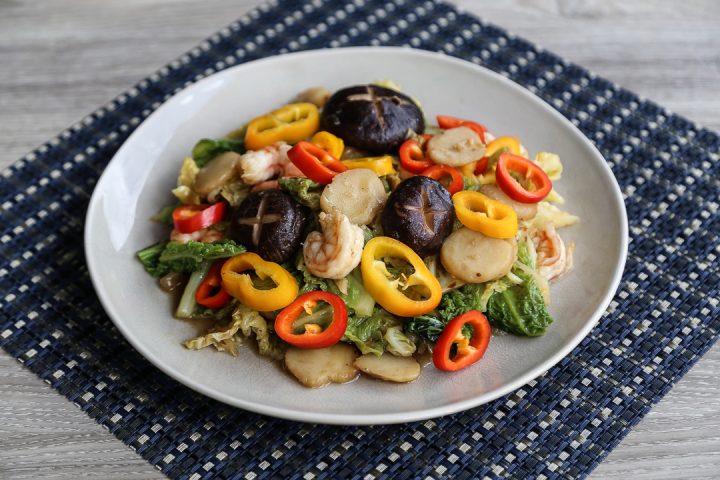