When I see shops like this, it reminds me of Europe in summer, specifically in the Mediterranean region, there are tons of gelato shops everywhere most of them were amazing.  In New Zealand, it’s a very rare occasion to see something like this, where what is displayed are freshly made from the shop topped with great visuals that makes you want to grab one, that’s due to the fact that Kiwi’s pride themselves with amazing ice creams that is supplied by good ice cream makers big and small, so getting one is as easy as going to the supermarket.  Gelato and Ice Cream might look similar, but they are quite different in terms of process and what goes in it.  First Ice cream contains more air and fat, while gelato has less air and more milk giving gelato a denser texture.  Next gelato contains less sugar than ice cream, while this is a difference the amount is sort of irrelevant as they both pack a lot of sugar anyways.  Third, gelato is usually served about 10–15°F which is 6–8°C warmer than ice cream, this makes gelato’s flavour stand out.

Now let’s go back to our gelato shop, Island Gelato.  Basically a small-scale gelato shop that started in Waiheke Island, then now they grew to three branches adding Auckland CBD and New Market on their map.  Known for its many flavours and weekly specials, they pride themselves with their store made full bodied flavour gelato.  While I had seen them in Waiheke we never tried it there, what we do tried was the one on their New Market branch after passing by the place and saw the amazing toppings on each gelato on display, its definitely a nice visual and if that does not catch your attention, I don’t know what will.  As promised from their website they have tons of options, from gelato, to sorbets and even vegan versions.

We tried four different flavours on two cones, we grabbed the Popcorn Peanut Butter Caramel, Salty Caramel White Chocolate, Double Chocolate and Vanilla Bean.  They all lived to their names and boy they are all good!  On every lick you made, you can certainly taste the quality of their offering.  I specially loved the Double Chocolate which has a bitter taste to it, this only denotes that it has a high concentration of cocoa.  Salty Caramel White Chocolate too was amazing, the saltiness on that sweet creamy gelato, just complements well with each other.  Price wise it was quite expensive, but you would understand why, this is not your normal Tip Top ice cream.

Overall we loved it, the place was so clean, you don’t see smear marks on the display glass so you can clearly see the what you might want in its full glory.  Will definitely come back and probably try their fruity variants.  If you want to experience heaven during summer, then this is the place for you. 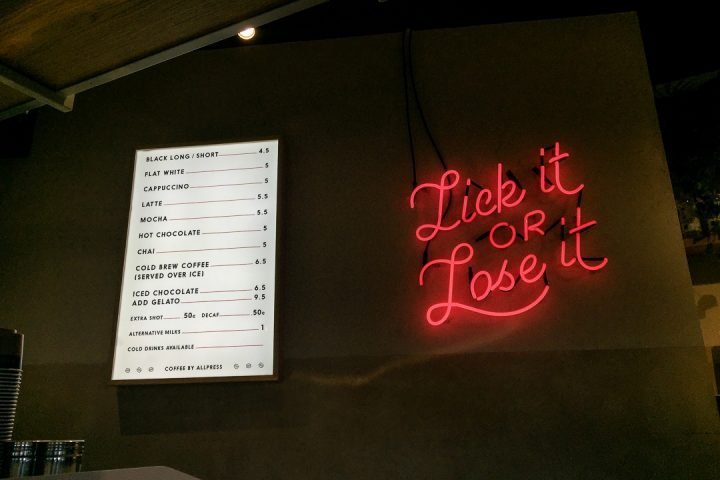