Gamjatang is a spicy Korean pork bone soup prepared by slowly simmering pork bones until soup is milky in consistency then seasoned with Korean seasonings like gochugaru and gochujang.

You might have recognised this dish if you have been into a Korean restaurant, that red soup broth that is served with pork bones and wilted cabbage, it is called Gamjatang. This spicy pork soup with hints of sweetness and lots of umami is seasoned with Korean spices like gochugaru, doenjang and gochujang which gives it that distinguished flavour. A popular soup dish in Korea where it is commonly served at homes and in restaurants.

Gamjatang originated in the southern Korean province of Jeolla, a place where is famed for its agriculture, where pigs are widely raised. During those days’ cattle were mostly used to help with ploughing the fields which means it’s quite a valuable commodity and was barely used for food. This explains this dish’s pork origin, since pigs during those days are a cheaper alternative for a protein source, they were slaughtered and used for feasts and special occasions. 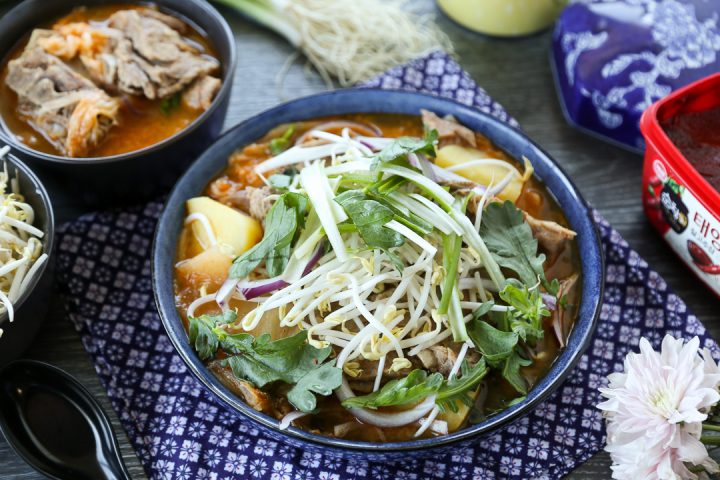 Incheon harbour then opened around 1800’s and it began to develop as an international commercial port. During these days many people migrated to Seoul and its surrounding area from Jeolla Province. Constructions was everywhere and gamjatang become popular among them because it is cheap and nutritious, with its high fat content, this dish provided the right calories for these workers. Since then gamjatang became one of the iconic foods of Incheon. As time progresses, it’s not a laborers food anymore and it can be found in most Korean restaurants, and today we are making this soup here in Auckland and this is my take it.

Gamjatang is a spicy Korean pork bone soup prepared by slowly simmering pork bones until soup is milky in consistency then seasoned with Korean seasonings like gochugaru and gochujang.