Crispy Shrimps Binondo Style is a Filipino style deep fried spicy salt and pepper baby shrimps, cooked with shells on making it crispy on every bite.

Binondo is a district in Manila and is the oldest Chinatown in the world and it was founded in 1594 and was established by Spanish Governor Luis Pérez Dasmariñas as a permanent settlement for Chinese immigrants who converted to Catholicism. It is a vibrant place and like most Chinatowns in the world it is studded not just with inexpensive goods but with restaurants too, and it’s one of the reasons why you visit such locations.

Our recipe today is one of the old Filipino Chinese recipes, Crispy Shrimps which is basically a Filipino Chinese version of the Salt and Pepper shrimp which in turn comes from the same family of dishes like Salt and Pepper Chicken, Salt and Pepper Squid, Salt and Pepper Tofu and Salt and Pepper Spare Ribs to name some where the primary ingredient is meat that is deep fried giving a crispy outer layer then seasoned with salt, pepper and chillies. So what is the difference between this Chinese and Filipino Chinese dish? First the Filipino Chinese version uses small shrimps which gives is a bigger shell to meat ratio making it crispier than its Chinese cousin, it’s a good way to use those small shrimps to where it is hard to remove the shells. Another major difference is the use of pepper, since we don’t have Sichuan peppercorns back in my home country what’s used in this dish is white pepper powder and/or black peppercorn, so it does not have that numbing sensation that you get from the Chinese counterparts. Finally the most Filipino bit on this dish is serving it in a spiced vinegar mix called sawsawan. Apart from that everything is the same from the rest of the ingredients up until to the cooking method.

I know you might be asking now whether the shrimp head is consumed on this dish, well yes and that’s totally edible and the one that adds excitement to the dish as this part is the crunchiest bit. Don’t freak out like some of my readers had before when they saw prawns in my picture complete with head and shells, all of the body parts of the shrimp tastes similar you won’t even notice it.

Crispy Shrimps Binondo Style is a Filipino style deep fried spicy salt and pepper baby shrimps, cooked with shells on making it crispy on every bite. 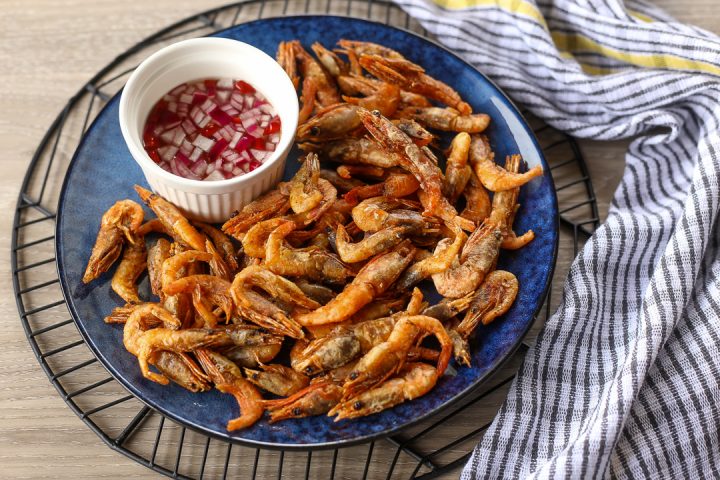