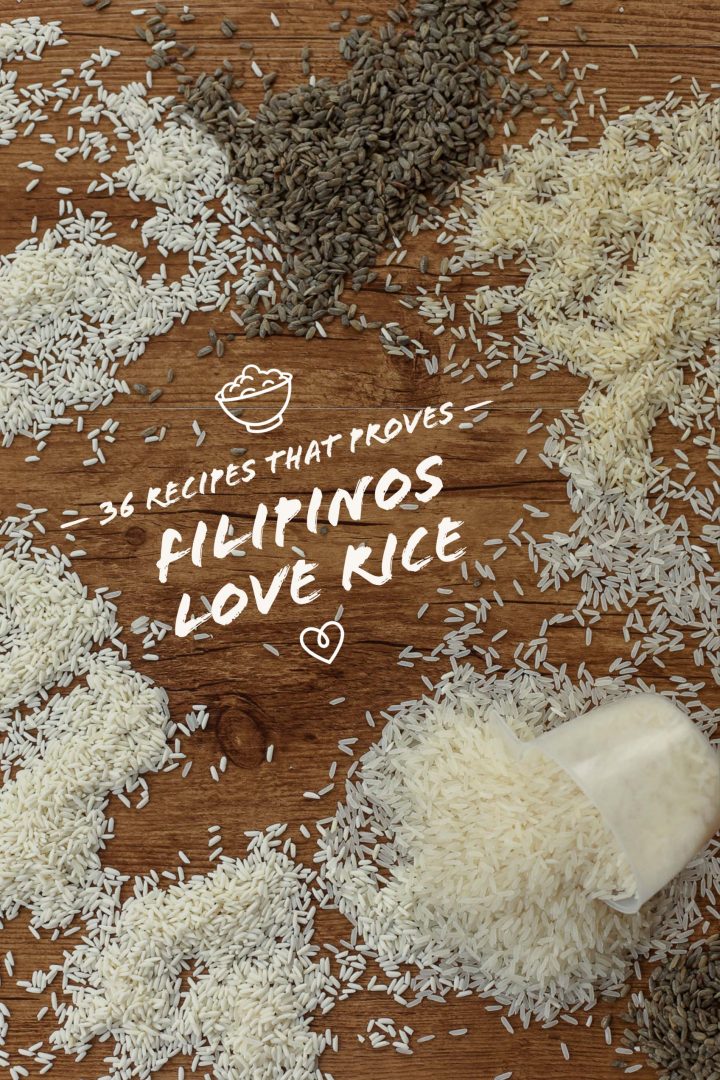 If you have lots of Filipino friends, you would probably have noticed their love for rice. We eat them during breakfast, teatime, lunch, snacks, dinner and dessert, but why? Rice is pretty much a staple food for the Filipinos, since birth we were trained to eat them like its starchy water called “am” and rice porridge called “lugaw”, this means we are accustomed to it, our bodies are trained to extract the nutrition out of it hence if one occasion rice is replaced with something like bread, our bodies get confused on how to extract the nutrition out of it which may have the result of feeling hungry even though our stomachs are full.


Rice is everywhere back home, in fact Philippines was one of the largest exporters of rice but by the 21st century there was a population boom, so Philippines held back and in fact we start to import them since the supply is not enough with the demand. Another important aspect on this topic is that rice is a cheap source of energy that provides people to do their daily activities in an inexpensive way, all you need is a small quantity of very tasty viand served with tons of rice and off you go. An average Filipino currently consumes around 120 kilograms of rice per year, but this is different depending on your income brackets, those in lower-income eat more rice than the middle- and upper-income people, where diets are more varied and consume more meat and vegetables.

You might think rice is boring, it’s a tasteless food item compared to other carbohydrate sources like bread, corn and potatoes where you can eat it on its own. That is correct but only if you consume rice and nothing else, hence Filipinos tend to serve it with flavourful dishes as the rice can be a carrier of those salty, sour, sweet, spicy and bitter sauces. That does not stop there we even make rice a main dish by adding preparing them with different ingredients similar to pasta in Italy and tortilla in Mexico. Today we will be showcasing these preparation methods, the 36 Recipes that proves Filipinos love Rice and hopefully you start loving them too by trying out these dishes.

The list below will not include rice that has been processed like rice flour and other varieties, we have whole other list for that but for now we will just stick with the whole grain rice.

This category will be the simplest of all in this list, most of the items here are paired with a viand.


Sinaing – This is just your normal boiled rice but when served with other Filipino dishes it becomes amazing. Yup were are all trained to cook this on our own without rice cooker, all we need to remember is that when we prepare them just level it out and place your index finger so that it is touching the surface of the rice then add enough water so that it comes up to your first line or knuckle.
Sinangag – Now let’s start adding some flavour by stir frying that day-old rice with tons of garlic, this is the base of most Filipino breakfast
Java Rice – Now add a bit of colour and you have this, perfectly paired with grilled barbecue meats.

Let bring things up to another level by stir frying them with other great stuff, there are more to this list but let’s just stick with the popular ones and the ones using Filipino ingredients.

Egg Fried Rice – Lets start by adding some eggs, this on its own can be breakfast already.
Tinapa Fried Rice – How about some tinapa? Definitely this will be smoky in flavour.
Bagoong Fried Rice – If tinapa is not tasty enough, then use fermented shrimp paste (bagoong), serve it with mangoes then you’re all sorted.
Aligue Rice – Aligue or crab fat butter, yes there is such a thing, yes is dangerously high in cholesterol but its yummy, once in a while I guess it is OK.
Chao Fan – Popularized by Chowking, this is a Chinese Filipino fusion fried rice prepared with fatty pork, squid balls, corn and green peas, it’s an all in one meal.
Chorizo Fried Rice – Definitely there should be a Spanish inspired item in this 36 Recipes that proves Filipinos love Rice list, we have been colonized by Spain after all and there’s nothing better to represent it by using some Chorizos
Seafood Fried Rice – Finally since Philippines is bountiful with seafood, there should be a fried rice that represents that.

Filipino Style Paella and its cousins

Yes, we also have paella, and I guess you know where it came from. Our paella is quite different since we don’t eat rabbit a lot hence it is adjusted with the local ingredients available to us.


Paella – This is the Filipino version, prepared with chicken and seafood plus chorizo which if you believe a Spanish one should not have
Bringhe – No saffron and Bomba Rice, no problem we swapped it with turmeric and glutinous rice.
Arroz ala Valenciana – Almost similar to bringhe but instead of turmeric, tomato paste, and coconut milk is used.

Machang – This is the Filipino version of Lo Mai Gai or Zongzi
Kiam Pung – A cross between Lo Mai Gai and Clay Pot rice, this one is made with sticky rice cooked with shiitake mushrooms, Chinese Sausages and adobo meat.
Comida Tsina – The Filipino style clay pot rice cooked with chicken, Chinese sausage and mushrooms.
Cebu Style Steamed Rice – A twice cooked rice where its stir fried and steamed then topped with a starchy pork and prawn sauce.

Is it Porridge or Congee?

Next section on this 36 Recipes that proves Filipinos love Rice list is rice cooked in lots of water basically making it rice soup. While it’s not appetizing as it sounds when cooked with chicken or beef then it’s in a different level.


Lugaw – the most basic of them all and also the generic Filipino name for rice porridge, basically this is rice and water with a bit of salt and/or sugar.
Arrozcaldo – this is a type of lugaw but it is cooked by sautéing garlic, ginger and onions before adding the rice and water/broth. Traditionally the authentic Arrozcaldo is made with beef meat and beef broth not chicken, but since chicken is more budget friendly than beef, it replaced beef and became more popular since then.
Goto – this is a type of lugaw and its also known as arroz caldo con goto, similar preparation to arrozcaldo but instead of using beef meat or chicken, it uses beef tripe (or goto in Tagalog) and sometimes fried cubed pork and/or chicharon.
Pospas de Gallina – This is the Chicken version of the Arrozcaldo, traditionally whole chicken pieces are used, take note it’s not flaked but a whole section cuts such as leg, thighs and wings.
Bulalugaw – Bulalo + Lugaw = this. That bone marrow it this dish’s highlight.

Rice for Breakfast or Snack

Apart from the fabulous rice cakes the Filipinos have in their cuisine we also have sweet rice dishes that can be eaten during breakfast or snack.

Champorado – How about some chocolate rice? It gets weirder when you serve it with dried fish on the side.
Ginataang Mais – How about some creamed rice but instead of cream you use coconut milk? Add some fresh corn kernels and you have this.
Lelot Balatong – If corn is not your thing, how about some mung beans with rice?

This section of 36 Recipes that proves Filipinos love Rice list is quite exciting, combining two different dishes in one. Which means you clean up is easier since you are serving this on one plate rather than two, one for rice and another for the viand.

Nasing Marangle – Bagoong fried rice, pinakbet and lechon kawali, should I say more?
Sinangag na Sinigang – Sinigang flavoured Sinangag, Sinigang braised Lechon Kawali and Crispy Kang Kong! Yeah baby!!!
Pinoy Shawarma Rice – If the wrap does not fill you up, eat the shawarma fillings with rice.
Lechon Fried Rice – Lechon and Fried Rice, it’s a rarity because usually there is no leftover lechon to cook this with.
Silogs – Fried Meat, Egg and Rice, this is your typical Filipino breakfast. Tapsilog, Tocilog, Adsilog, Bangsilog, Longsilog, Hotsilog, Dangsilog, the list is endless.

These are some of the rice cakes (kakanin) that uses whole grain rice. But take note rice flour variations are not included on this list, if you are interested in that head over to this post.

Suman – The most basic form, glutinous rice wrapped in banana leaf
Biko – Not wrapped on a leaf but placed on a baking pan then baked coconut milk and of course sugar.
Bibingkang Malagkit – Bibingka that uses glutinous rice flour instead of normal rice flour, sometimes slices of langka are added.
Puto Maya – Puto but prepared with whole rice grains.
Deremen – Prepared with a type of young glutinous rice that is burned in its husk and pounded, sounds interesting, yes, it is.

Ampaw – This one is a great snacking item, sun dried rice that is puffed when deep fried. Move over popcorn this one deserves attention.

There you go the 36 Recipes that proves Filipinos love Rice, how about you, will you start loving rice after reading this?