Cuapao is a type of a steamed bun shaped like a thick folded taco filled with fermented mustard greens, pork and chopped peanuts.

I first saw this dish when I was really young, perhaps around 7 years old in Greenhills, I forgot the restaurant name but it was near that fishing pond inside that complex, up until my teenager years that place was still there but I am not sure if now they still exists. During those times this dish never appealed a young boy that I was, first I was already hooked to the normal usual siopao asado and green vegetable thing that is sandwiched on this bun looks disgusting to me, young boys in general never liked vegetables. Many years later as my palate was exposed to many different cuisines, I started to enjoy vegetables and appreciate what’s beyond a burger or a siopao which brought me to my first time eating them, at the same place. To my surprise it was not bad at all, in fact that green vegetable that accompanied it made sense as it added a different dimension in flavour and texture.

So what is cuapao? Basically it is the same recipe as the normal steamed bun, also called folded steamed sweet buns, Lotus Leaf Buns, bao bun or Guabao. Traditionally it is filled with a slice of red-cooked pork belly, dressed in stir-fried suan cai (pickled mustard greens), coriander, and ground peanuts but in the Philippines the slice of pork belly is replaced with something more Filipino, the asado filling. Either way a slice of pork or an asado works wonders with this soft fluffy bun.

This definitely is more versatile than siopao, because you can literally put anything on it, in the easiest way, duck, chicken, pork or beef, you can even change your mind, unlike with siopao, if that’s the filling of your choice then that’s it, you are stuck with it. What’s even better, is that in most Asian grocer’s frozen lotus leaf buns are readily available and that’s what I did with our recipe today.

Cuapao is a type of a steamed bun shaped like a thick folded taco filled with fermented mustard greens, pork and chopped peanuts. 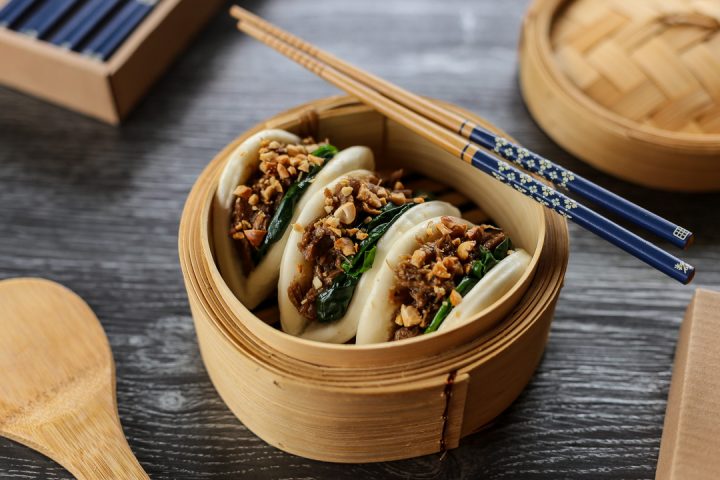