Madam Woo is one of those restaurants that I had been wanting to try for a long time, if I can remember this branch in Takapuna had opened its doors around early 2017 and since then I just passed by the place once in a while wondering when will I ever put my foot inside that place. Three years later here we are and were trying it with a bang and it’s one big of a bang since we grabbed their Yang Dinner Menu (NZ$65.00) with some Beverage Package (NZ$39.00 for 2 hours) on our most recent team dinner.

Madam Woo is a Malaysian restaurant with a slight influence from Chinese, Portuguese, Indian and a some Kiwi. It not a fine dining place but the dishes that come out of that kitchen are all Instagram ready, well garnished and plated nicely. It’s a large place, we were a big group and we barely dented the numbers they get on a busy night. There is a good vibe at this place, quite casual and very open so you feel that sense of space. Our group was placed on the high table seating, just behind the bar, and it was a perfect arrangement since it was a team event, people will tend to mingle around as we eat and drink. Proper seating will be a bit of hassle as you have to move chairs, stand up, pull back a chair then sit down. On high seating tables, you are already near standing position to its easy to move around, even if you don’t sit, you will be on eye level with everyone.

As mentioned earlier I grabbed the Yang Dinner Menu and the two-hour Beverage Package for my team. The Yang Menu, is basically a set menu where it is served with appetizer, two finger food, three entree, three mains, rice and a dessert. The Beverage Package on the other hand is a drink all you can package on a limited amount of time; I grabbed the two hours. The beverage package includes bubbles, white wines, red wines, beers, soft drinks and juices. It was one hell of a set meal, which definitely my team had enjoyed really well. 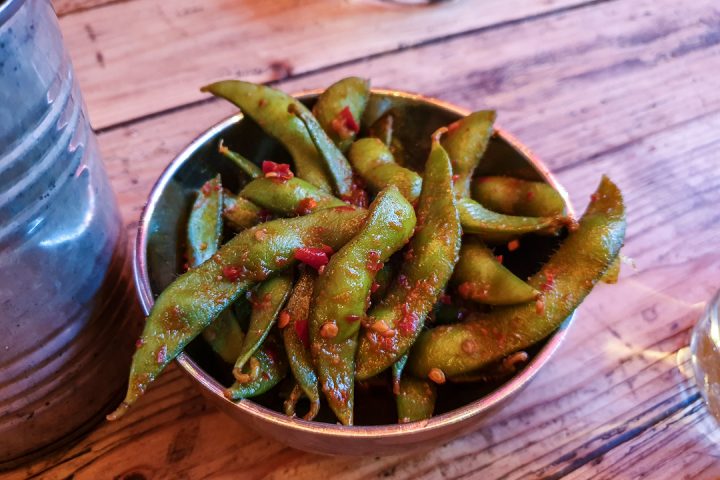 Let’s start with what I grabbed for that Yang Menu. To start we had some Edamame and Sambal, this is a nice twist to the usual boring steamed edamame. The sambal definitely lifted up that boring tasteless edamame.

Then we had this Five Spice Fried Chicken which was so tasty we even forgot there was a dip, golden fried crispy on the outside and quite moist inside.

Next item was this prawn dumplings, while it may look simple what’s inside will surprise you. Large chunks of prawns and other magical ingredients, again another tasty treat.

We then go to the entrees, starting with the Wok Fired Greens with Twice Cooked Eggplant. This may not please everyone, but I like it, it’s bitter and savoury, vegetables are crispy, and that sauce just envelops everything in this place specially those eggplants that soaked up all the flavours. Its savoury pungent with a bit of kick!

The came this Honey and Soy tossed squid, while I had indicated before that one of the best squid dishes, I tried was at Bunga Raya this squid dish from Madam Woo can go with the ranks of that. This one was perfectly cooked, the squid was so tender, it just dissolves between your teeth as you bite on them. It was very flavourful, so savoury, the umami bursts every bite you have. I love that bit of kick as well, not too spicy.

And for the last entree it was this stir-fried pork belly, cooked with Chinese cabbage and other Asian greens. Pork is OK, nothing to special with it but the greens once again was amazing, perfectly cooked served very crispy with some light seasoning.

At this stage we are quite full, that was a lot of food before the mains plus we are making the most of the unlimited 2-hour drinks. There was a short break but after a few minutes the food kept on coming back, and now it was the mains.

First up was this Beef Rendang cooked in coconut cream, galangal and kafir lime. This rendang was quite different to the ones I tried in South East Asia which was dry, this was moist and saucy, and I liked it, I love sauces on my dishes. It was tasty but not as spicy as the authentic ones, this is more like a stew that is inspired by Rendang, nevertheless it was good. 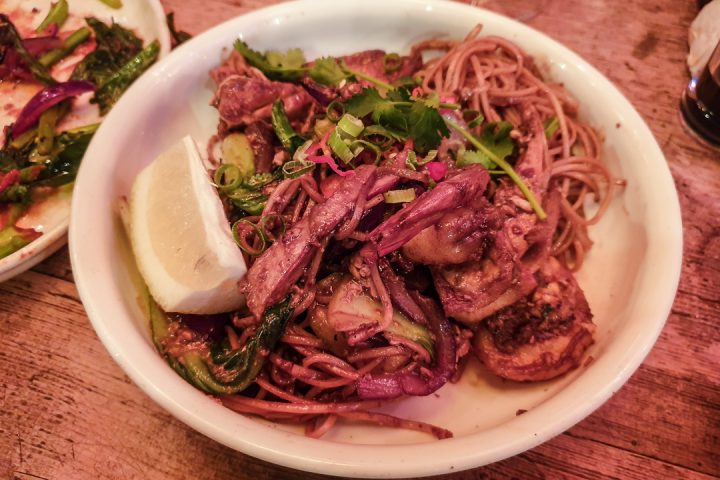 Then came the Mee Goreng, mamak style egg noodles served with large prawns, chicken, veges, egg, fresh lime & coriander. This can go to the top 5 Mee Goreng I tried in Auckland, it’s almost similar to the Mee Gorengs I tried when I lived in Kuala Lumpur except that this one was quite generous with its prawns and chicken.

And then the last of the Mains was this Assam Chicken Curry, a light aromatic sweet & sour curry for those who don’t like it spicy. Chicken was tender and the sauce was lovely, you will need tons of rice for this one but for us, it seems like there is no more space after all of the food that came before this.

All of the mains was accompanied with the Woo Fried Rice with mixed vegetables & crispy shallots. 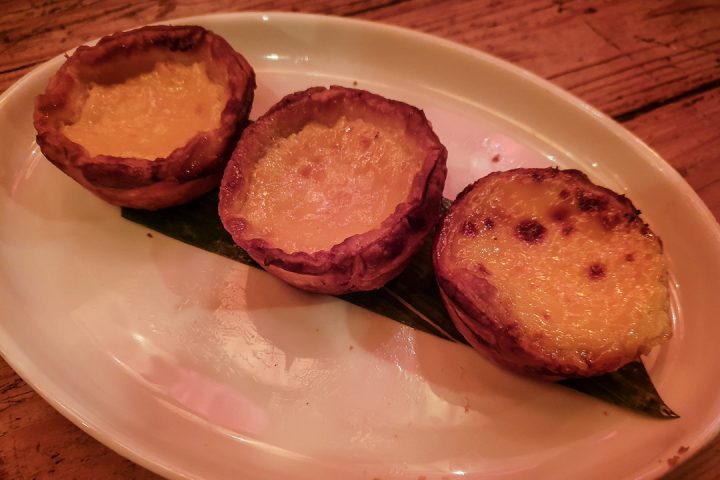 Now for the dessert, after a few adjustments on our belts and a short walk around the tables, there was space freed for this one, and you should because I tell you now this is the best item on the menu, period! Trust me its way much better than the real ones I tried in Macau, honestly. I probably ate three of it because it was one of the best food that touched my mouth in my lifetime. It was crispy on the edges, flaky, buttery, creamy, not too sweet, warm, it was just the perfect Portuguese Custard Tart. If you will go to Madam Woo, this is a must, you should not leave the place without giving this a shot.

So there you go, the food was fantastic. One of the best tasting food I ever tried in Auckland but what’s even better here is the service. At the beginning it was quite kind of S#!+ because the lady manager that attended to us told me that I never had ordered the beverage package so she cannot give it to us. The Indian guy that took over her was one of the best customer services I ever tried in New Zealand, the lady never did apologise that it was their mistake after I showed her my email confirmation, this Indian guy was the total opposite and was very apologetic. He made sure he was there if we need something which made the experience quite special, in short, he attended to all our needs in detail, with a real smile, without pen and paper, he knew which drinks we ordered and what meals are for what person with special requirements. To top it all up, he extended our drinks with one last call after the 2-hour period! What a legend, sadly I did not get his name, but we did tip him well. There you go, everything was nearly perfect at this place, I really recommend it! and if you are looking for a package for your team within the Takapuna area, this is the best bang for your buck, for NZ$105.00 per person where can you get that amount of food with an unlimited drinks?