Bam-I or pancit Bisaya is a Filipino stir-fried noodle dish cooked with different meat and vegetables together with two different noodles, glass noodles and egg noodles.

When I first tried this dish in the Philippines, I don’t have any idea of its name, only until recently I learned of its name from a Visayan in our Filipino community here in New Zealand. She cooks this a lot, brings it on most occasions and even caters for it, I asked her one time what does she call this dish and told me its Bam-i.

The time I heard what that dish is called, it instantly reminded me of an Indonesian dish called bakmi sometimes also called bami goreng. Bakmi in Hokkien Chinese means “meat noodles”, Bakmi goreng in Indonesian means fried noodles, similar to the Filipino Bak-mi, it is stir fried noodles with generous amount of meat. Both noodle dishes are considered a level up from the usual stir-fried noodles due to the different arrays of meat that accompanies it, hence it’s not your typical noodle dish since it consist of at least 10 ingredients to start with, lavish versions can have 15 or more ingredients.

Indonesian Bakmi and Filipino Bam-i will be highly related based on my observation. While Filipino Bam-i does not have any written history that can support its origins, what I know is that the Fujian Chinese brought the Indonesian Bakmi to Indonesia, similar demographics of who were the early Chinese settlers in Visayas region where this dish is popular. To further strengthen that claim, the Indonesian Bakmi is made prepared with a wheat-based noodle topped with minced pork seasoned in soy sauce and some char siu and Chinese green vegetables then served with a bowl of broth. That bowl of broth is the key since tradition states that the Filipino Bam-i should not be served dry and a pot of hot caldo should be served on its side if the diner wishes to add it to the noodles. Bam-i is also made with wheat noodles but with the addition of another noodle which was added by some cook when he ran out of noodles, but that happened after the dish was already introduced in Visayas. Lastly the names are almost similar, coincidence? It’s all up to you to decide. 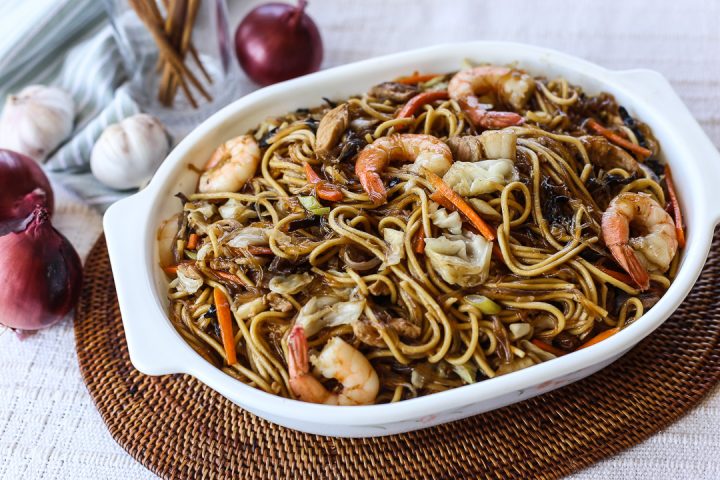 Going back to Bam-I, like any other pancit recipes there are many ways to cook this, but one thing remains the same, the two noodles that it is prepared with. Another important aspect is that this dish, since it’s mostly served on occasions the ingredients won’t stop with two types of meats and vegetables, the more, the merrier, hence you see this dish usually prepared with at least 3 types of meat like Chinese sausage, pork, chicken, beef, prawns, squid, fish balls and squid balls to name some. In addition to that a variety of vegetables are used as well.

Bam-I or pancit Bisaya is a Filipino stir-fried noodle dish cooked with different meat and vegetables together with two different noodles, glass noodles and egg noodles.