Yes this is my third review of the place (probably my fifth visit) which means a lot and yes, we are having another degustation, well sort of, as Huami calls it set menu and that’s what we exactly had.  As of this writing they offer two set menus, Huami Summer (NZ$96.00) and Huami Nectar (NZ$106.00), where in the summer focuses on dim sum and stir fries, the nectar focuses on balance on everything, where you have different dishes from duck, chicken, prawn, crab, beef and vegetables offered as starters, soup and mains.  We chose the latter and had the nectar.


I did not know what to expect, as before we chose individual items on the menu, some of it were recommendations and some we had tried already, this time we will let the set menu speak for itself.  Although I said earlier this is not totally similar to a degustation, it was served almost like that during the first part of the dining where starters are served individually and after the prior one has finished.  After the soup course it totally changed and all four dishes sort of arrived at the same time.

Let’s start! First item on the dinner was this cocktail which I did not get the name of.  The nectar menu usually includes a glass of Perrier-Jouët Grand Brut Champagne but we got offered the cocktail option.  It was fruity a bit on the strong side which is a good palate cleanser after each starter dish.

Then the Fruit Wood-Roasted Peking Duck came next, I had these multiple times and I can say the quality is similar across all experiences, it’s just above all other roasted duck I tried in Auckland. 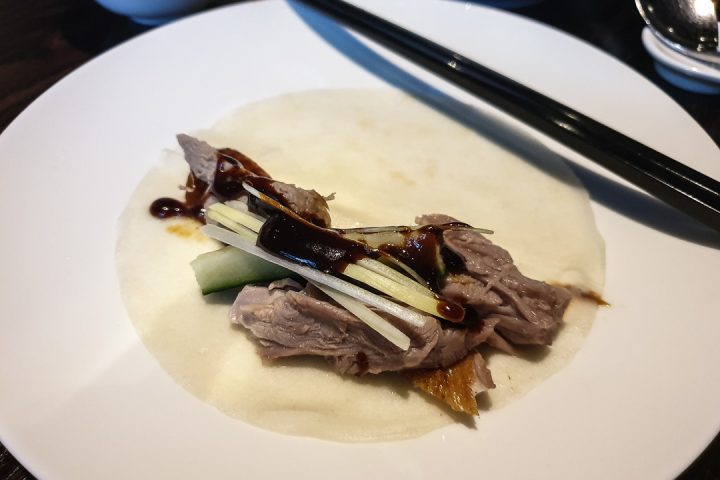 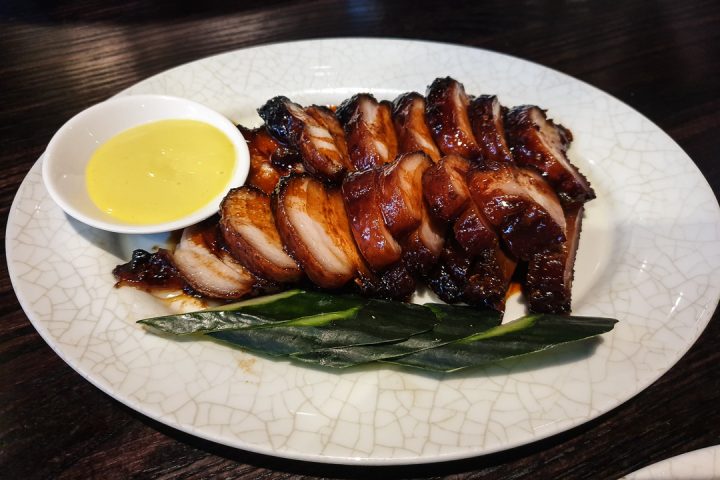 After the duck we got a bit of surprise as we met our neighbour who is working at this place, he gave us an extra dish which is their Manuka Honey Glazed Pork Char Siew with Mustard Sauce.  We tried a small portion of this and took home the rest as there will be a lot of food in this set menu.  Again it was a great char siew, it was elevated in many levels, first it is not dry, it was very tender and soft, plus the honey glaze was amazing with that mustard sauce.  At first, I thought it won’t match together but it was a great combination of flavours, something new for me. 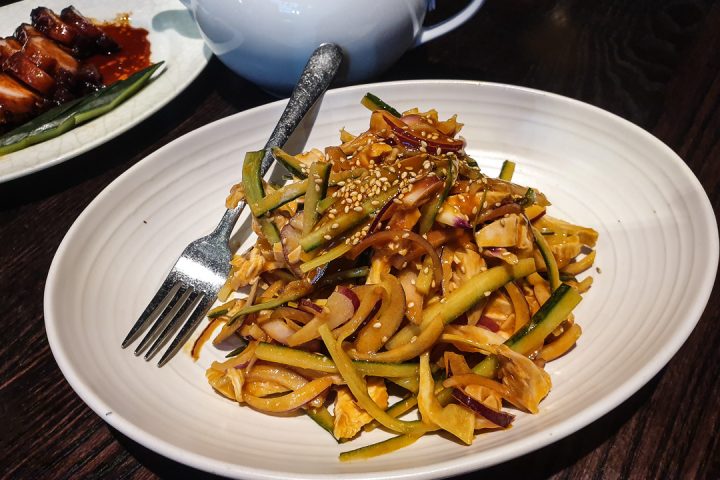 Now back to the actual appetizers, next up was this marinated Bang-Bang Chicken in Spicy Peanut Sauce.  I tried this before and I loved it.  It is a cold dish and it was done elegantly, nice umami taste which you usually don’t associate with something cold, but it helps with the spiciness of the dish giving a nice sensation of cold and tingling spicy hot. 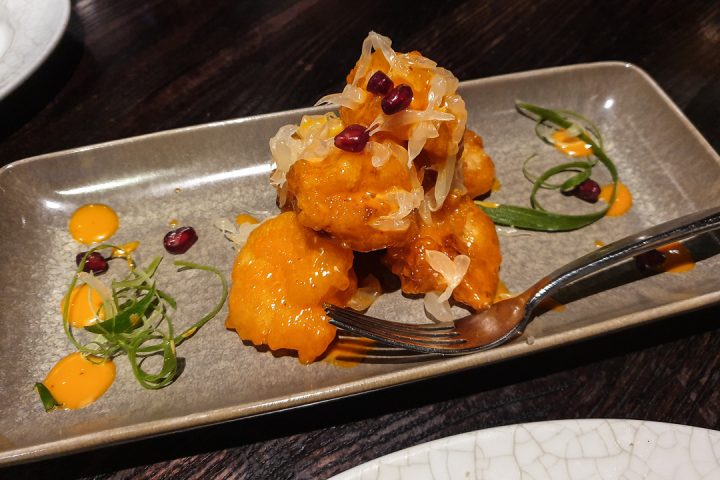 Then the Crispy Tabasco Prawns served with Pomelo Salsa, which is a flavour explosion, its sour, its sweet, mildly spicy and savoury, it all happens in one bite so expect festivity in your mouth. 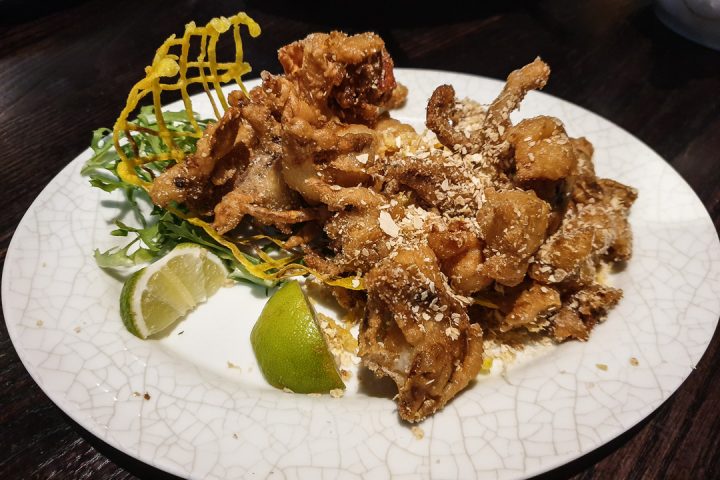 Last part of the appetizers was this Deep-Fried Soft-Shell Crab served with Oatmeal and Crispy Egg Yolk.  This has to be my favourite, perfectly fried and that egg yolks was amazing, it was out of this world.  After this course we have a bit of a rest, it was quite a good amount of food, though it’s done in almost a degustation way, the sizes was way much bigger, in fact we already started to get full at this stage.

After a few minutes the soup course arrived, and it was superior broth with King Crabmeat and Fresh Fungus, it was one elegant soup.  Punch in your face crab flavour but no fishy taste, great flavours and texture.

After the soup was the main course and this is where the big bang happened, all four main courses nearly the same time. 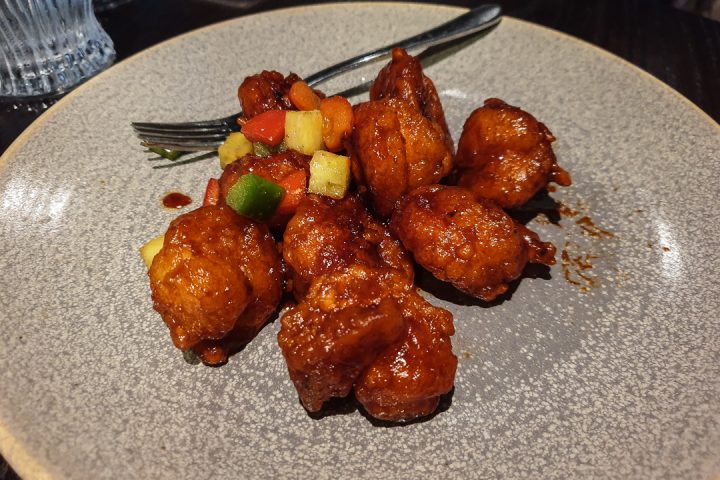 First mains was this Deep-Fried U10 prawns in Sweet and Sour Sauce.  It was a mouthful of prawns; it was huge and meaty.  Great with the sweet and sour sauce, which was not too strong, just enough sweetness and sourness so you can still taste the flavour of the prawn.

Then the Wok-fried New Zealand Beef in Black Pepper Sauce, I was not expecting that texture, sort of like wagyu but it was not, very tender and moist, but not fatty as a wagyu.  It was nice, great deep flavours from the black pepper which was good with the meat.

For vegetables it was this Quick-Fried Caulilini with Bacon, Dried Chilli and Garlic, this goes to the list of my top vegetable recipes I ever tried, it is in the ranks of Aperos Roasted Cabbage, Cotto’s Zucchini Fritti and Masu’s Yaki Kosuretasu, it was that good, so good you don’t feel like eating vegetable at all.

Last mains was this Huami XO Chilli Fried Rice with Shrimp and Squid, another spicy affair but not overly hot, gives a nice tingling sensation on each spoonful.  Very tasty and oily in a good way.  A nice way to end the mains.

At this point we are struggling, that quite a lot of food.  Luckily the dessert was light, and it was in the form of Mango Pudding served with Roast Pineapple and Coconut Kaffir Lime Ice Cream.  For a dessert dish it was quite a play of texture and flavours, totally refreshing and not overly sweet, just a nice touch to balance things out again. 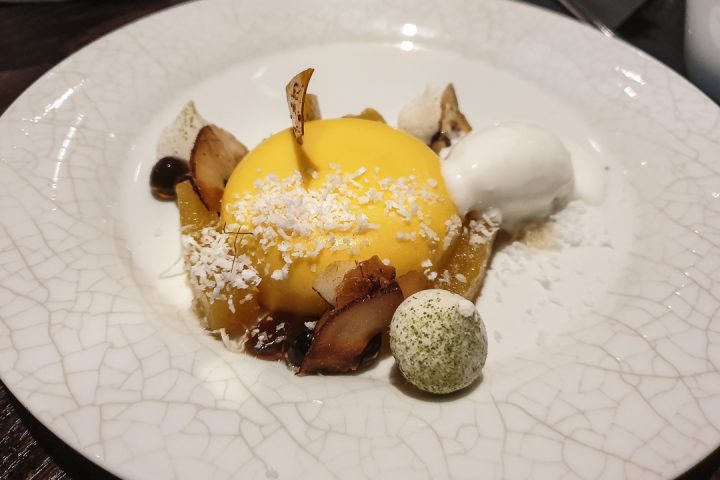 It was a great meal, totally worth it, it was also one of the most affordable tasting/set/degustation menus to have in Auckland.  At NZ$106.00 a pop you can experience an elevated Chinese cuisine.