Pork Chops in Creamy Mushroom Sauce is a special dish that comes once in a while on a Filipino gathering feast, prepared with pan fried pork chops served on a creamy sauce with sliced mushrooms.

I don’t know what’s up with Filipinos and gravy, I bet after adobo and sinigang this is the most sought-after dish, why? Because the last time I was in the Philippines, KFC puts their gravies in a large thermos jar chained to the condiments area.  For most Filipinos they will understand why, but to further elaborate for the others let me tell you the story.  When I was young fast food establishments like McDonalds and Jollibee tried to serve fried chicken like KFC, the chicken was accompanied with a nice tub of gravy which goes a long way especially when you are tight in budget, where you order a single piece chicken with tons of rice and just ask for multiple gravies to use it as “sabaw” or soup for the rice, this was the norm.

The asking of extra gravy by hungry diners would have irritated the fast food attendants, especially when you ask multiple times so most establishments placed it in thermos jars during the late 90’s to early 2000’s, wrong move as people will just drink it if they can, which sort of happened, the thermos on the condiments section disappeared and was place on the diners table as the people who love it would rather have it Infront of them rather than going to that section every time.  I was a culprit, I love this shizzzz, it makes every fried chicken shine.  Now since everyone is doing that, diners are now disappointed as they can’t find the gravy, as you have to find which table is it on, and if you do it might be all gone.  The next era then started; establishments started to chain then so it stays in that place.

Many years later, I think after 15 years I went back to the Philippines and the gravy scene had changed, when I visited Jollibee the gravies was back in the counter, I am not sure with other establishments.  Then they made it harder, they place it in small containers which would contain roughly 15 mls of this crack but I think it sorts of work, they usually give you two to three full containers in one shot and because Filipinos have this quality of “nakakahiya” or shyness, they are shy in asking for more since they already gave you three containers of gravy.  So did I ask for more, yes, I don’t have that “nakakahiya” quality in me.

Now for our dish today dish and some other Filipino dishes with gravies, if you notice they just don’t serve it on the side, instead they serve it more like sauces and in most scenarios as a thick soup.  Dishes like Burger Steak, Beef and Mushroom, Lengua and our recipe for today, Pork Chops in Creamy Mushroom Sauce.  Actually this is just a pan-fried pork chops but what makes it alive is the creamy mushroom gravy that everyone loves.  How about you do you love gravies?

Pork Chops in Creamy Mushroom Sauce is a special dish that comes once in a while on a Filipino gathering feast, prepared with pan fried pork chops served on a creamy sauce with sliced mushrooms. 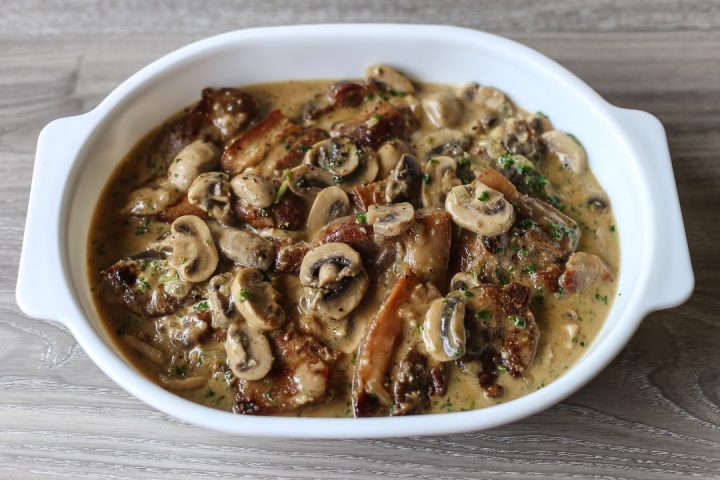