I never had imagined a trained Le Cordon Bleu Paris chef would someday be following a humble home cook blogger like me. I have all sorts of followers that I knew and most of them are home cooks like me but I guess Frances would be one of the most legitimate and the most professional in terms of culinary art that follows Ang Sarap. It was such a pleasure having her to guest post here specially that she is just residing over the Tasman Sea in Australia, a close country to New Zealand that shares a lot of common culinary influence mostly from the European, Asian and Pacific Islands.

Fran is not just a chef but a food blogger at G’Day Souffle a blog like Ang Sarap that showcases different dishes around the world like this Spanish ham croquettes with jalapeño peppers, her rendition of the Mexican Pulpo a la Brasa by Javier Plascencia and the French Lamb en croûte with Provencal Vegetables. Everything is mouth watering and done with great skill and precision. So without further ado let me present to you Fran who will be making a dish that is well-loved to both Australia and New Zealand.

Is it a disaster if your Pavlova turns brown? Should you cry if the meringue cracks? I’ll be answering these questions for you soon thanks to Raymund’s invitation to do a guest post for his blog Ang Sarap!

I’ve been following his blog now for several years and have been enthralled with his huge range of recipes- my favorites being his Mozzarella-stuffed Meatballs and his seafood stew, Mutya Ng Cavite. I live in Adelaide, South Australia, ‘just over the pond’ from Raymund in New Zealand. More than once I’ve felt like zipping over on a plane to taste his delicious recipes!

I’ve decided to present this recipe for Pavlova with Mixed Berries for two reasons. First of all, I used to be a dancer at one point in my career and this recipe was named after the Russian ballet dancer, Ana Pavlova. Second, this recipe was invented in Australia after Pavlova toured Australia in 1926- or SO I THOUGHT!


There is still an ongoing debate of whether the dessert was invented in Wellington, New Zealand or in Perth, Western Australia. Some researchers even say that this meringue-based dessert was first invented in Germany, before being brought to America by immigrants in the 1800s. In any case, the Pavlova is one dessert you’ll want to make to impress your friends and family, with its crisp outer shell and creamy marshmallow interior!

This was the first time I had ever made a Pavlova and it took me three tries to get it right! The first time, the oven temperature was too hot and my Pavlova burned and turned dark brown. The second attempt was a bit better, but the color was still too brown for my liking. For the third attempt, I was so intent on my Pavlova being snowy white in color that I kept on opening the oven door every five minutes to check the color (not recommended)!

For my Pavlova, my optimal oven temperature turned out to be 140 C (pre-heat) and 130 C for the 1-hour actual baking time (conventional oven). The idea is to first have the oven hot enough to crisp up the exterior when you first place it in the oven, then reduce the temperature to produce a creamy, marshmallow-like interior. Since each oven is different, you may need experiment a bit before finding the right temperature for your Pavlova.


Nigella’s says it’s OK for Pavlova to be brown and slightly cracked!

You may notice that a lot of photos of Pavlovas appear to be very white, which I was trying to achieve. However, Nigella Lawson’s video shows that her Passion Fruit Pavlova turned out light brown in color with some cracks. She says that it’s the taste that matters, not the color! It turns out that I didn’t need to worry after all!

First, trace an 8-inch circle on a piece on parchment paper and then set this aside (increase the size of the circle if using more egg whites). Whip the egg whites and sugar together until stiff peaks form, add the corn flour and lemon juice, then spread the mixture inside the circle using a spatula.

Continue to spread the meringue, creating a well in the center to hold the whipped cream and berries for later.

You can make a smooth-shaped Pavlova: 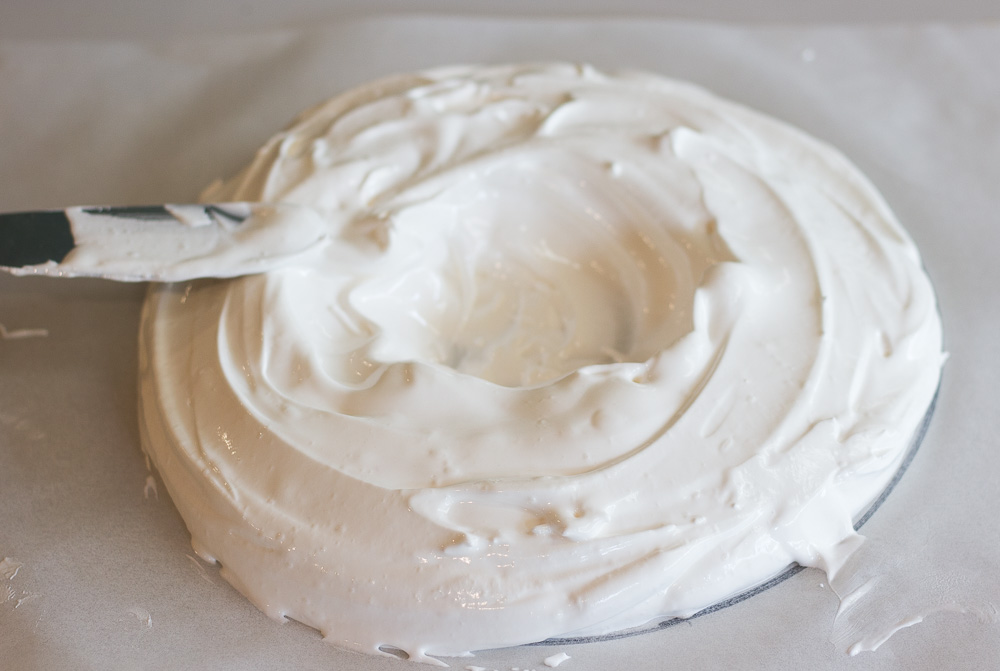 Or, create some ‘peaks and troughs’ for a more rustic look! 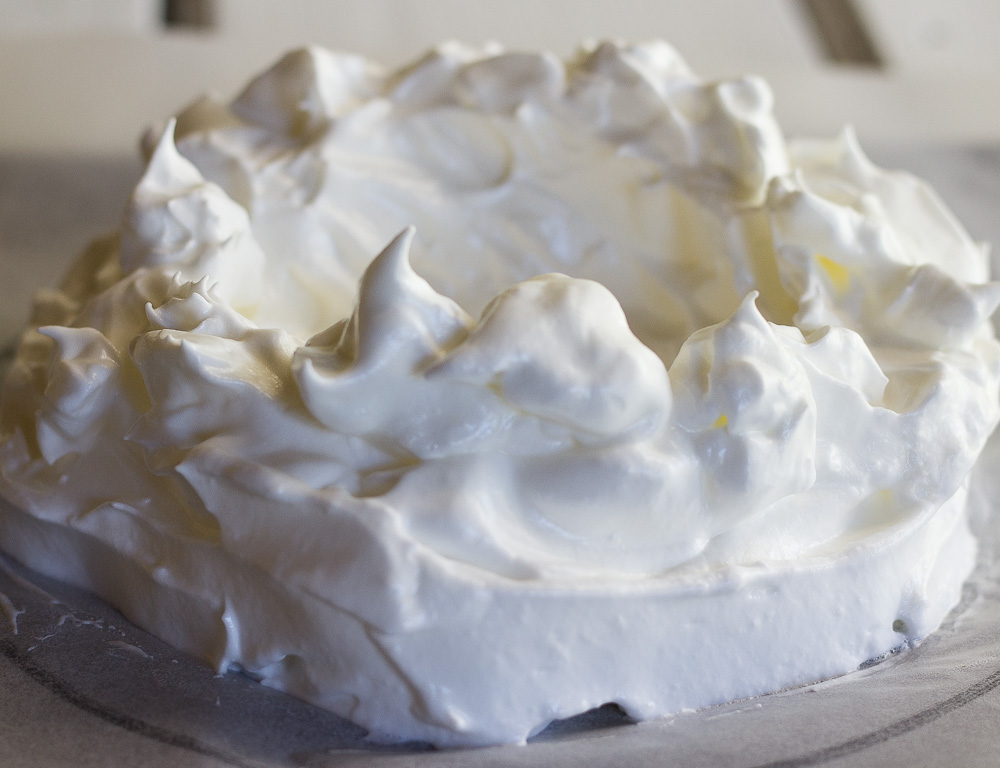 Bake the Pavlova for one hour, then turn off the heat and let cool in the oven for a further one hour. Spread the whipped cream on top and add the mixed berries; serve immediately.

What fillings do you prefer for your Pavlova? Enjoy! 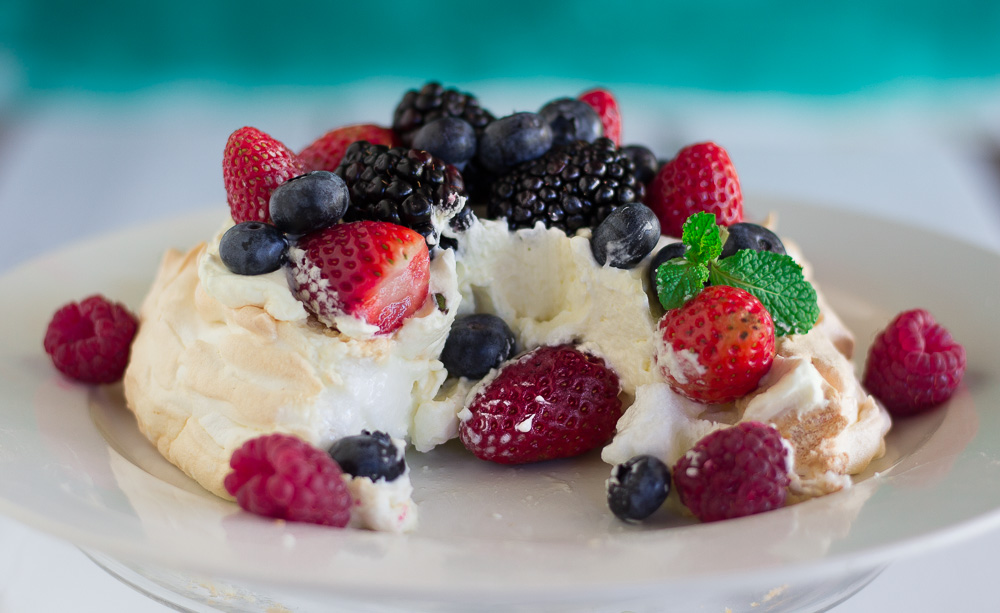