Top 17 Panaderia Favourites is a compiled list of Filipino Pastries and Bread types usually sold on bakeries (panaderia) that is loved by most Filipinos.

Top 17 Panaderia Favourites is a list of the popular Types of Filipino Bread compiled by Ang Sarap from our recipe archive as well as recipes of other Filipino bloggers to let the world know what are our delicious breads and pastries that we consume on a regular basis from our trusted panaderias.   Most Filipinos in the Philippines wont need this recipes due to the fact that these are very affordable items that you can buy from a panaderia.  For Filipinos outside the Philippines then this is an important list to have since a lot of us miss these kinds of goodies once in a while an it would be good to make them on our own when a panaderia is not available.  For the rest, like I said this is a way for me to let you know what the Filipino cuisine has in store for you, and these are just breads, there is a lot to check out and tryst me they are all amazing, but lets start wit this one.

You might have seen the word panaderia multiple times above but what does that word mean?  Panaderia for those who don’t understand Tagalog is the equivalent of bakery in the Philippines and it’s like a sari sari store where most neighbourhoods have one in most corners even at the most remote places. This bakery bakes fresh bread throughout the day starting early in the morning preparing pandesal for breakfast up until the afternoon where they prepare something like Spanish bread or pan de coco for merienda, at night it will be less busy but they are still open for business specially for those who wants to grab some hearty sweet breads for their baon the next day or as a dessert to end their dinner.

I grew up buying from this place almost every day, there are two panaderias near our place. I still remember my grandmother ask me to buy Php 5.00 worth of freshly baked pandesal sometimes with a stick of butter or a tingi of cheese or Reno liver spread if there is extra money. During those days a piece of bread would cost Php 0.25 now I think a piece would be around Php 2.00. It was always fresh out of the oven, I still remember holding those hot brown paper bag filled with these goodies, the minute you grab hold of them is the best time eating them, hot, milky, very soft. Pandesal is the most popular panaderia item, in fact this together with tasty (sliced bread) is closely monitored by the government in terms of its price, it’s even has its own commodity price index, it’s that important to the rest of the country.

During afternoons when my mom has workers that renovate our house, we grabbed their merienda in the panaderia, this time while pandesal is available most of them are not fresh so the most popular items at this time are enasaymada, pan de coco and Spanish breads where it is already sweetened so no need to put the filling in. A very cost effective and very filling merienda.


Today I will be showcasing you the Top 17 Panaderia Favourites, I know this will be not a complete list but these are the common ones that I know of and grew up with. Did I miss something? Let me know from the comment section below.

Pandesal – The number one Panaderia Favourite, it is the Filipinos ultimate tinapay a staple during breakfast, it’s the cash cow of all bakeries. The name literally means “bread of salt” which refers to the pinch of salt used on the dough, made with few simple ingredients such as flour, water, sugar and milk.

Ensaymada – This coiled buttery bread with sugar and cheese sprinkles is the Filipinos take on brioche. Like pandesal this bread originated from ensaimada, a yeast bun made in Majorca, Spain with pork lard. 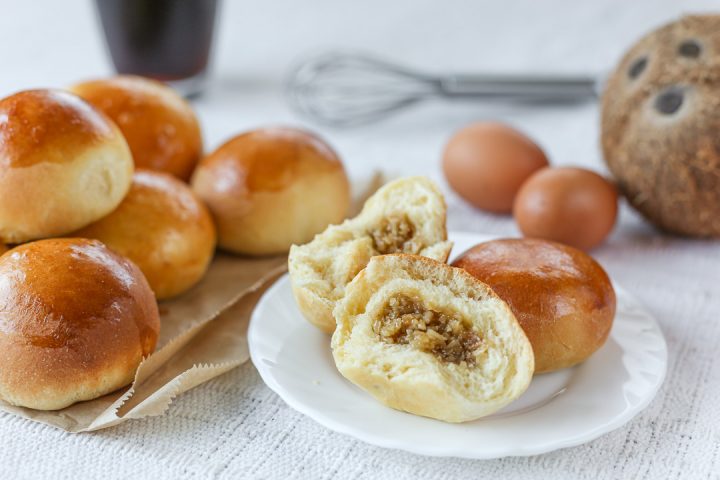 Pan de Coco – This Panaderia Faroutire very soft round bread filled with sweet coconut filling made with sugar, butter and grated coconut. Very deadly, it’s so delicious you won’t realize you are at your eighth bun. 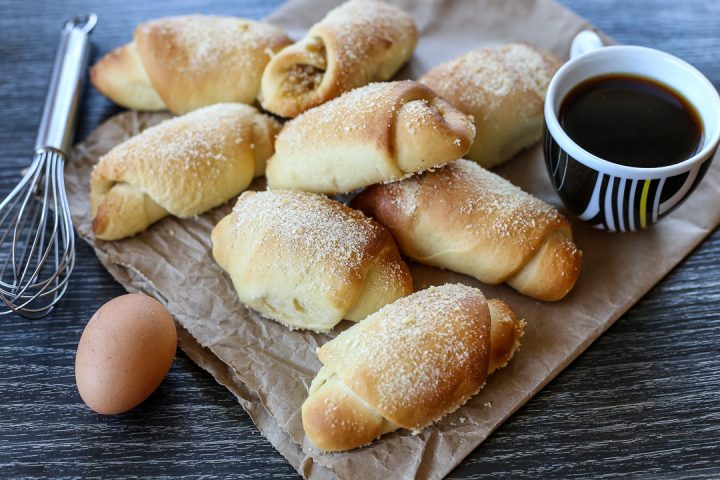 Spanish Bread – Similar texture to pandesal but rolled like a croissant filled with breadcrumbs, butter, and sugar. Though the same sounds it came from Spain this bread does not have any Hispanic roots, it is a truly Filipino Bread.

Kababayan – This Filipino Bread Type is a sweet bread that is prepared like a muffin, this perhaps is its simplest bread sold in panaderias as its only made with just eggs, sugar, milk and flour. I don’t know why is it called like such as the direct translation is “Fellow Countryman”, do you know why?

A post shared by Mavic Eats And Travels (@marivicwee2018)

Monay – This bread is popular with its split in the middle, more dense than usual Filipino breads and usually appearing pale in colour with a shiny gloss. This breads dough is the base for many other similar breads that we will list below like pinagong and putok.

Putok – Made from monay dough but instead of a split this one is a cross or a crown. Putok is harder than monay and would probably bruise you when thrown towards you. Putok means explode and that’s how it looks like because of that cross cut on top. This is harder since proofing time is lesser than monay.

Bread that looks like the back of a turtle. Tastes like #monay and #putok #pinagong #pinagongbread #quezon #bread #pastries #philippinefoods #foodie

Pinagong – Another Filipino Bread Type that is made from monay dough but the shape again is different, resembling a turtle hence the name, “Pagong” means turtle. This one is sweeter and milkier in taste compared to putok and monay. 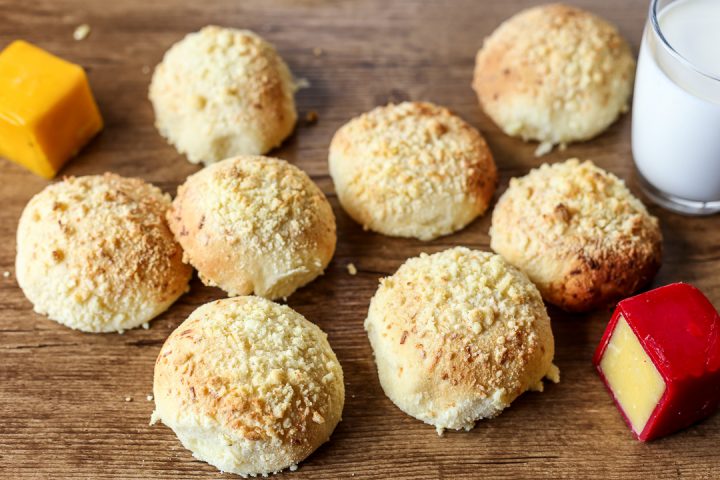 Cheese Bread – This Panaderia Favourite looks like an intensified colour pandesal, this bread is denser, sweeter, milkier, moist and most importantly studded with sweet cheese granules instead of breadcrumbs hence the name.

Kalihim – a Filipino Bread Types made out of soft bread filled with bright red or bright purple filling mead with thin bread pudding made from stale bread, milk, eggs, sugar, vanilla and lots of food colour. Also known as “pan de regla” or “menstruation bread”, I guess you know why.

Mamon – The softest Filipino Bread Types of all, this mini sponge cake is topped with melted butter and lots of grated cheese, very light, nicely sweet and very pillowy.

Tasty – The Filipino style sliced bread, I know the name may be misleading as this is the least tasty bread in here, like sliced bread you consume it as a sandwich where it is filled with your favourite spread. But why is this Filipino Bread Type called tasty? Do you know that was a brand of sliced bread before? Like most Filipinos who love calling items with its brand name regardless of this brand rather than the noun that describes it, like Colgate to toothpaste, Gasul to LPG and Coke to cola. Imagine someone asks you to buy Coke and tells you get the Pepsi brand 🙂

Pianono – another type of sponge cake rolled into a cylinder similar to jelly roll cake, what sets it apart from other roll cakes is that pianono are smaller in size and typically eaten in one or two bites

Asado Roll – another soft bread similar to pan de coco, slightly larger but instead of sweetened coconut strips this one is filled with savoury sweet pork like the ones you see in siopao. 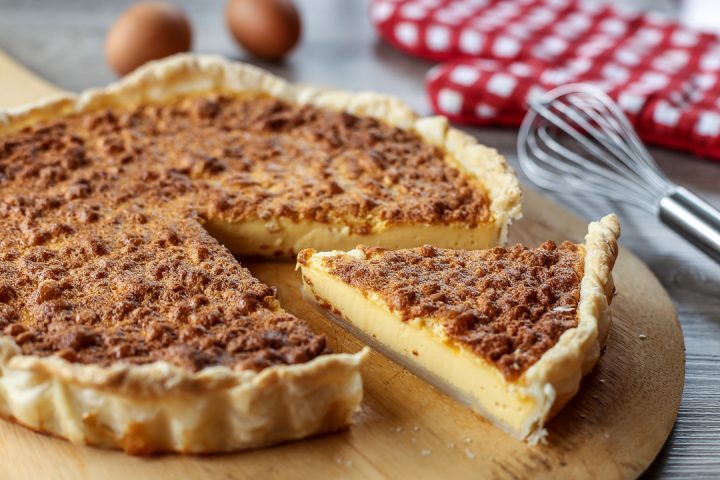 Egg Pie – a very popular Panaderia Favourite made out of egg custard baked on top of pastry dough, nearly similar to the Portuguese egg tarts, so what’s the difference? First is that the size is bigger usually served in slices and another one is the brown topping you see in the photo. That topping is also made out of eggs but only egg whites, I guess it was a slight variation which gives the dish an even colour on top unlike the spotted dark spots you see in egg tarts.

Buko Pie – Last on this list of Panaderia Favourites this type of pie made out of semi flaky pastry filled with custard made out of young coconut meat and condensed milk. Although it’s a popular pasalubong from Laguna province during the old days where it is sold exclusively on bus stations or traffic light intersections nowadays this is easily available on some panaderias.

So what do you think about this Top 17 Panaderia Favourites? Did I miss something or did you like to try some on the list.  Let us know by commenting below.