Balinese cuisine may be nearly similar to Indonesian but it’s quite unique in a sense since it is more of influenced not by the mainland but with Chinese, Indian and now since it’s a very popular tourist destination it is now being influenced by the Australians, Americans, British and Japanese to name some. What is even more interesting is that the island’s population are predominantly Hindu, hence the culinary traditions are somewhat distinct with the rest of Indonesia so festivals and religious celebrations play a big part in forming the cuisine which includes many special dishes prepared as the offerings for the deities, as well as other food consumed communally during the celebrations.

With the religion in mind beef is quite rare and, in some cases, not consumed in certain parts of the island but unlike mainland they do eat pork, a lot of it and they have special dishes that uses this meat. Rice is abundant as well like in most East Asia and South East Asian countries hence you see different rice dishes as well as desserts made out of rice.


Good food is everywhere, restaurants, night markets plus there are heaps of cooking schools as well so you can make what you tried and likes. Plus, what even better everything is affordable. So, if I am to list the must try food in Bali then here are my top 11

Rujak – Now if you want you fruits prepared then the best tropical fruit salad that you will have is this Rujak, basically most of the fruits above, chopped then dressed with gula jawa (palm sugar), asem jawa (tamarind), ground sautéed peanuts, terasi (shrimp paste), salt, bird’s eye chili, and red chili pepper. Yes, it’s not your regular fruit salad in cream, this one is a far much flavourful, in fact all of the flavour profiles are served in one plate, sweet, sour, salty and hot, only thing left is bitter. Definitely a must try.

Babi Guling – If every one local suggests this then it is definitely a must try, in fact this is quite hard to find, why? Because due to its popularity it sells out really fast. So, what is Babi Guling? Basically, a Balinese style roasted suckling pig, a lechon on steroids, amped up with spices to make what is already good, great.

Betutu – Another most recommended dish by the locals, an iconic Balinese favourite prepared with a whole chicken or duck stuffed with traditional spices then wrapped in banana leaves enveloped tightly in banana trunk bark then buried in a coal fire for 6 hours, it’s like the chicken version of Luau of Hawaii, or Hangi of the Maori’s. This careful preparation result in a rich and juicy tender chicken dish that falls from the bones.

Kopi Luwak – Probably the most famous item in here, definitely the most expensive roughly sells at US$100 and $500 per 500 grams, it is also the most interesting item in here, also called civet coffee or “poo coffee”, it is made by a complex natural process where the coffee fruit is consumed by the civet, seeds are not digested but fermented during the process, once its goes out on the other end, it is cleaned, prepared and roasted to make this Balinese specialty. You have to try it at least once in your life.

Sate Babi – Another pork dish, this time in a satay form, these are marinated, skewered and grilled pork, served with spicy nutty sweet sauce can be seen everywhere, the aroma of this being grilled is enough to entice your taste buds. I can eat 1 a dozen sticks of these, definitely a good street food, can be consumed on its own Usually served with rice or rice cake.

Nasi and Mie Goreng – This is a staple dish in Indonesia, like burgers in US, pies in New Zealand and pizza in Italy. You can get the good ones in here, these national dishes of Indonesia is a simple fried rice or noodle topped with a fried egg and dried shallots served with mixed veggies, pickles, prawn crackers, and satay. Be warned once you get a good one, you will be hooked for life, this thing is addictive, think of Indomie, well a way much better version of Indomie.

Bakso – There are the Italian Meatballs, then the Swedish Meatballs but what’s even better than those, let me present you the Indonesian meatballs, usually served with a delicious hot broth together with noodles and fried dumplings called Pangsit. It’s one amazing dish that is why even it is hot and humid in Bali people still eat them, and they eat it with a passion.

Fried Chicken – Yes, Fried chicken! Or Ayam Goreng, if you had seen the Bali “FC” joints or branded KFC rip-offs like JFC, DFC, CFC, TFC, C’Best FC, SFC, BFC, MFC, ACK, basically all the letter of the Alphabet “FC’s” then you will definitely understand. Its crispy tasty juicy fried chicken served with chilli sauce, what can go wrong. 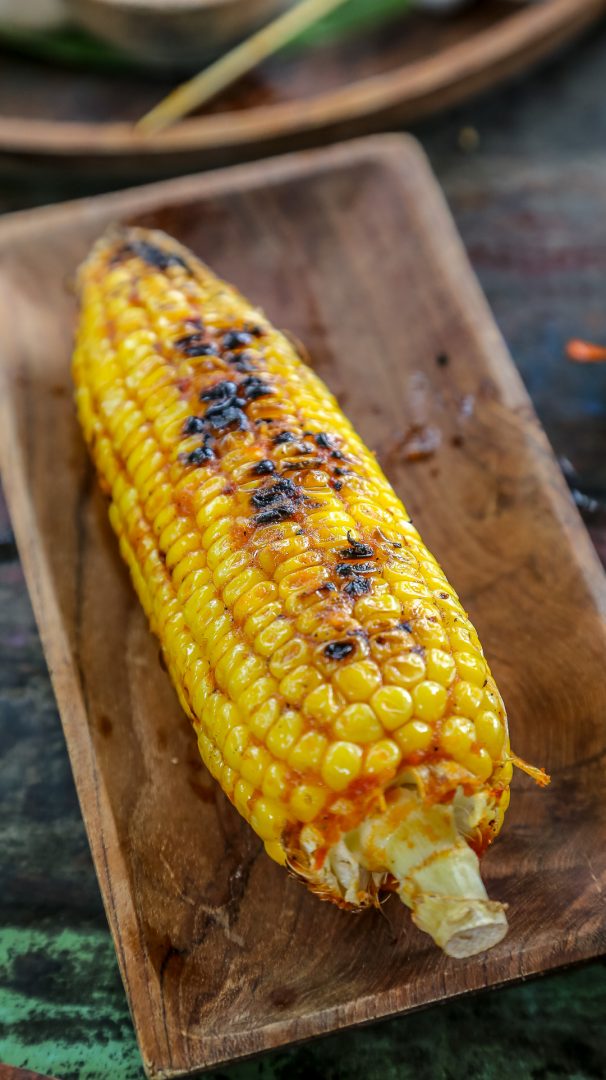 Sweet Corn – Another natures wonder, a simple grilled sweet corn generously coated with butter and different spices, it is the perfect snack to have on a beach with an ice-cold drink on the other hand.

Seafood – Totally self-explanatory, it’s an island with tons of great seafood so whether its lobster, prawns or fish cooked in any way you want it will be good, most of them are fresh and cheap, just imagine lobsters for US$15.00 who can top that!