Thank God for this Airlines, Auckland to Hawaii became really affordable for everyone in New Zealand. Since they opened this route I guess a lot of New Zealanders have a chance to visit this amazing holiday location and what’s the best airline to bring you there? definitely it would be its flag carrier but how does their food compare with the others? Let’s find out.

When I first tried this airline, I set my expectations very low as I remember some of my readers from America when I started this Airline Food series told me I was lucky as food is served on the planes that I tried, they mentioned in America they don’t and it was quite a shock for me because the very first time I rode a plane back in 1990 until now food was served every time apart from when the budget airline started.

Then came the serving, I remember we left midnight so I was not really expecting anything apart from breakfast but lo and behold they started giving away food bags.

Was quite surprised and it contained something more than enough for a midnight snack. There were bagged sliced fruits, a Pandoro slice (I love this, even Air NZ serves this goodies), a bread with chicken mayonnaise filling and of course my drink of choice guava to start that tropical feel to my trip. It was a good midnight snack, definitely filling.

Then the morning came and yes American style breakfast was served. Bacon, scrambled eggs and potatoes for mains, carrot almond muffin plus fruit bowl for sweets, and apple juice. It was standard but the servings were bigger than other airlines, more eggs and more bacon. Again, another satisfied customer.

More than a week later its home time this time I expected, but that expectation was not too much but since we late in the afternoon at least a decent dinner should be served. One hour on the flight it was serving time and this time we have rice. Yes! Asians rejoice 🙂


What was served was a type of chicken stir fry served with steamed vegetables, some sort of cucumber salad on the side plus butter cookies for sweet. And guess what? another guava juice for my drink. 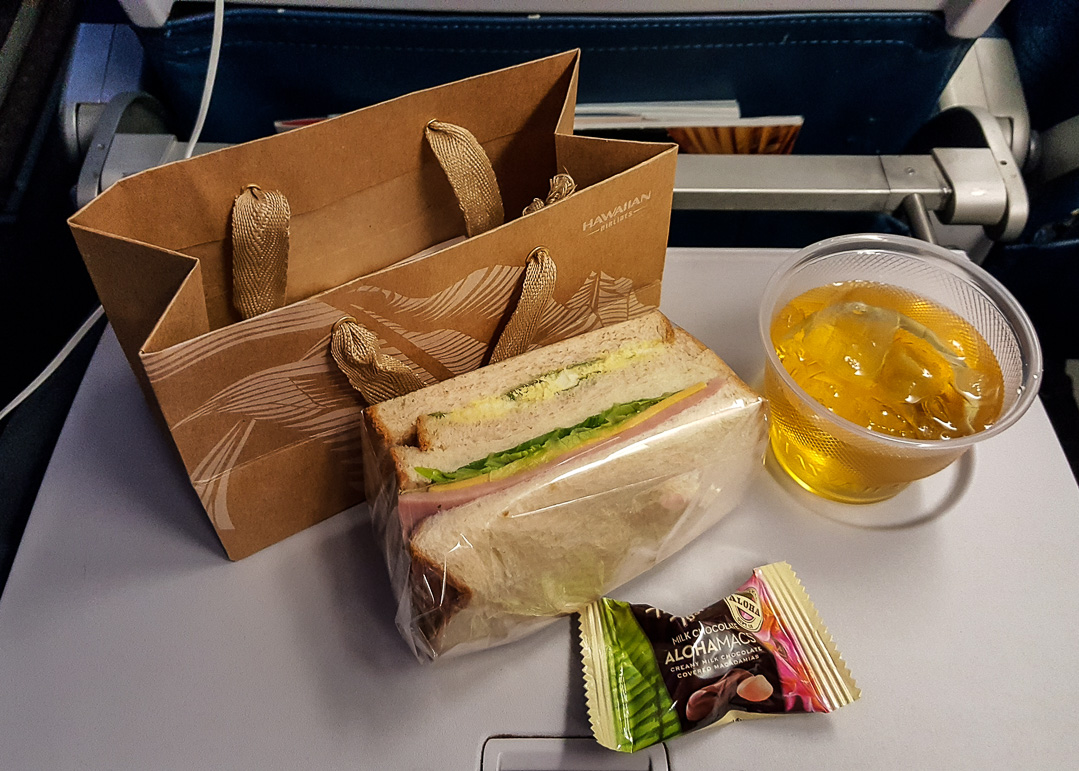 And for the final serving and again it was near midnight if I can remember. Supper was a simple ham and cheese bread, more like a club sandwich with a macadamia chocolate and apple juice. Again, it was more than enough for my needs specially at this time of the day.

Overall the food was more than enough for an 8-9-hour flight, was it good? Yes, they are, straightforward and nothing fancy, good old tasty food without frills.