You want it with noodles, we have it as well. You can either enjoy these recipes on its own or like what most Filipino’s do, with rice. Some noodles in these dishes traditionally are used as an extender effectively feeding more family with less meat hence rice is needed but for the last four items on the list below they are just consumed as a full meal on its own.

Misua – The angel hair pasta of East and South-East Asia, the fine flour noodles on a soup gives it a very pleasant texture. Again, one of the common household soups back home.

Pancit Molo – Similar taste to the one above this one is a close cousin to wonton soup but instead of throwing away those leftover wonton wrappers we just throw them into the same pot effectively making it like wide noodles.


Sotanghon Soup – Another noodle soup dish, this time made with mung bean noodles. A totally different texture to most noodles, its slimy and chewy.

Sopas – This one looks like the Western chicken noodle soup but the Filipinos added their own flair, the evaporated milk.

Lomi – Thick fat noodles with crispy fried pork bits in a starchy egg drop soup, this is my favourite noodle soup dish. A common street food where there is a secret rule on how its consumed, apparently the soup needs to be drank while piping hot.

Mami – The Filipino version of the Chinese egg noodle soup, in fact it was bought over by a Chinese migrant and re-engineered it for the local palate.

Batchoy – This has two types, one is with the misua noodles and another with the regular egg noodles but both served with a variety of pork and beef innards. 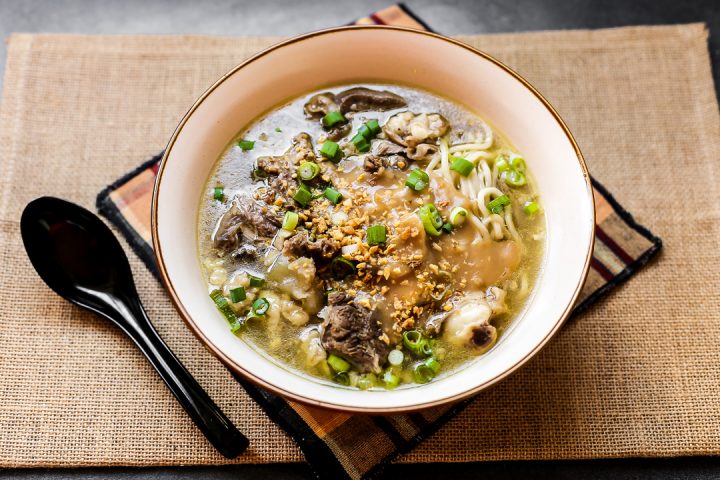 Kinalas – Another exotic noodle dish this time from the Bicol region, basically it’s a garlicky noodle soup dish served with meats extracted near the bony parts of the animal.