Yōshoku is a term for Western-influenced cooking in Japan and some good examples of it are Omuraisu (Omelette Rice), Hayashiraisu (Hashed Beef with Rice), Kareraisu (Curry Rice), Korokke (Croquettes), Hambāgu (Hamburger Steak), Naporitan (Neapolitan Spaghetti) and Rōru Kyabtesu (Cabbage Roll) but is there a term for the other way around? the Japanese-influenced cooking in the West?

Why am I asking this? well because I recently discovered a dish where a Western food like the humble steak was influenced by the Japanese cuisine. While most steaks are served with gravy made with beef drippings or cream sauce made with milk or cream this one is quite unique as it uses a popular Japanese ingredient to flavour its gravy, the miso. That might sound weird to you, even I was sceptical to try this the first time but it really works and it works beautifully. With the miso boasting tons of umami matching it with delicate mushrooms like the Enokitake and a bit of cream, it makes even the most boring steak shine.

There you go there must be a word for it, especially not new recipes like this are coming out where Japanese ingredients are infused on Western dishes, this steak is one but there are many more recipes out there that has this qualities like Wasabi Fried Chicken, Pasta cooked with dashi and even Kew Pie on Teriyaki Burgers. How about you do you know such recipes? Let us know. 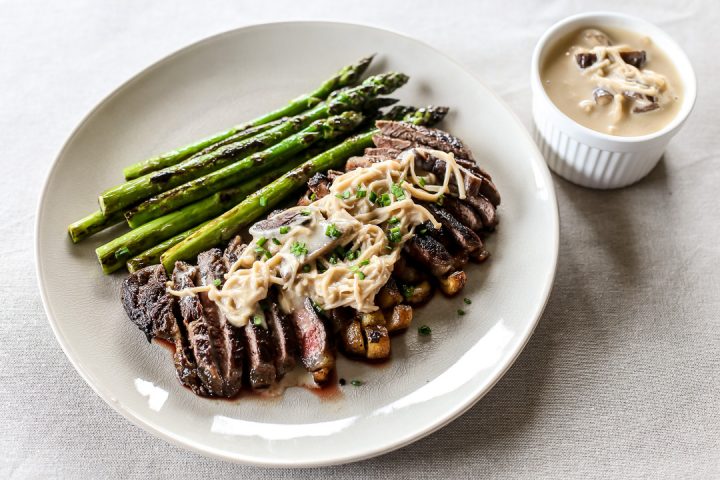