If there is one thing to hate in Japan it has to be dining in busy places because you have to queue for quite a while before you can eat. In New Zealand this rarely happens and this phenomenon only exists in very popular restaurants on very special days and if you have to queue it won’t be that long. In Japan regardless of the day as long as it is in a high density area on a lunch time or dinner time this is what you will be enduring every time having said that it will not be as stressful compared to Philippines or even in America since people here are quite polite so while you are in a queue you feel alone since it is so quiet, everyone whispers except if you are beside a tourist, very long queues will also move fast than normal because Japanese people by nature are considerate to they will try to finish their meal faster to people outside can sit. 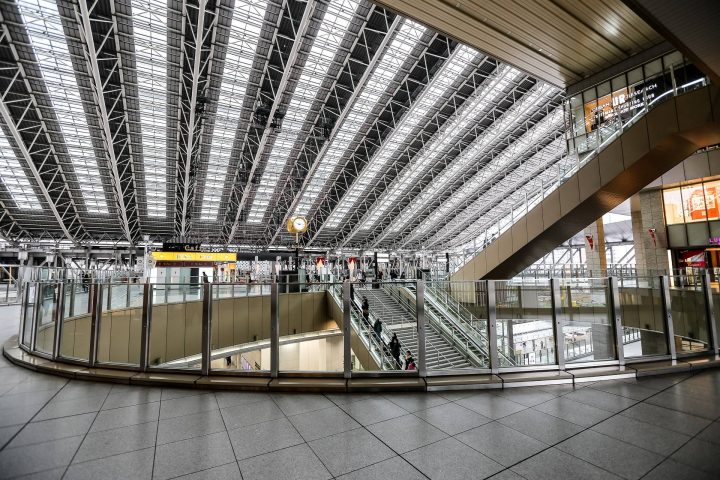 This is what exactly happened when we visited Lucua Mall in Osaka on a lunch time. We were quite hungry and when we reached the food court at Level 10 it was a nightmare all restaurants are fully packed and each of them had long queues, for us it looked so stressful as we are not used to this scenario. We walked around and it was a similar scenario regardless of the cuisine type. There were lots of Japanese restaurants and since it’s our last days in Japan we decided having something not Japanese and we saw this place Spacca Alberta. 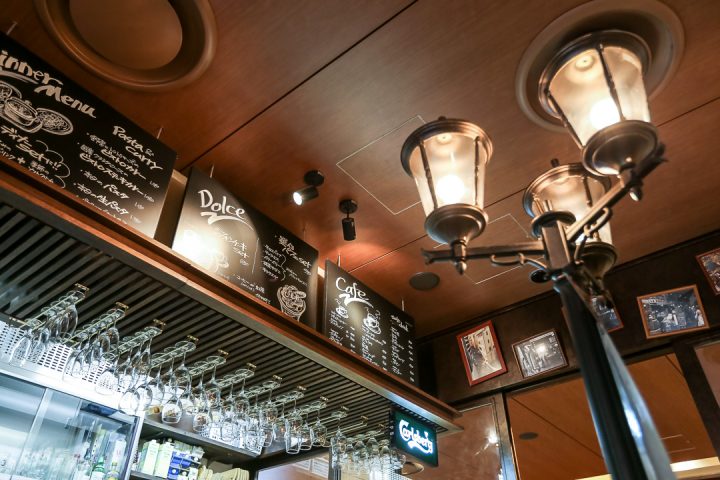 The menu is what attracted us here, I was craving for meat at this stage and my wife is looking for pasta so this was the perfect place for us.

There was quite a queue but not that long I guess there were at least 8 people ahead of us and they were in pairs. The place was small, I think they only have 30 or less seats so I thought it will be a long wait but I was surprised and amazed as we are seated in less than 30 minutes.

We were then directed to our place and like most Japanese places were offered a box underneath our chairs to put our belongings. It did not take us a lot of time thinking of what to order first because we know what we are having and the choices is quite simple. If I can remember there were 5 choices for a set of mains.

We chose the double Salisbury steak, cheesy seafood gratin and tomato pasta. I also remembered there were no English menu but luckily there were photos outside because the menu was just and illustration, the waiter was quite helpful as well explaining what dishes are on each illustration.

After we confirmed our orders the salad immediately arrived, it is made with seared duck, salmon, potatoes and some greens. It was quite different but definitely delicious.

Alongside the salad buns were served as well, and for those who knew me I love dinner rolls or any bread that is served on restaurants sometimes I ask for an extra serving which I did. 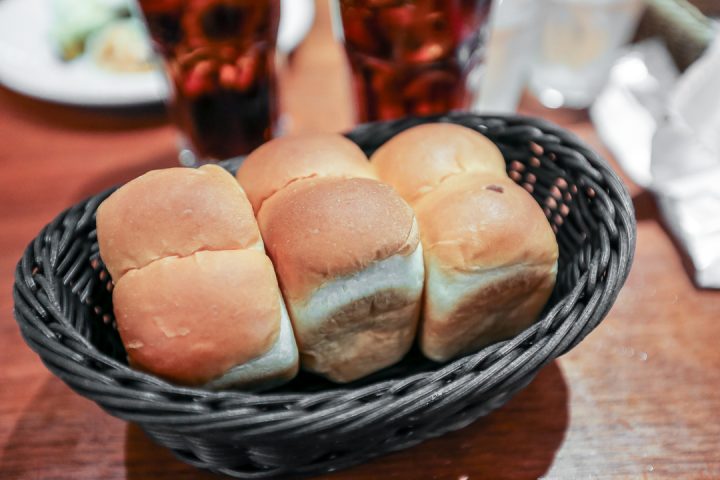 Few minutes later our orders arrived, first was the Salisbury steaks where it is served with gravy and French fries. The patties were quite different, it was light and definitely not made with entirely beef. It was mixed probably with crumbs and minced pork; the gravy was light tasting as well. 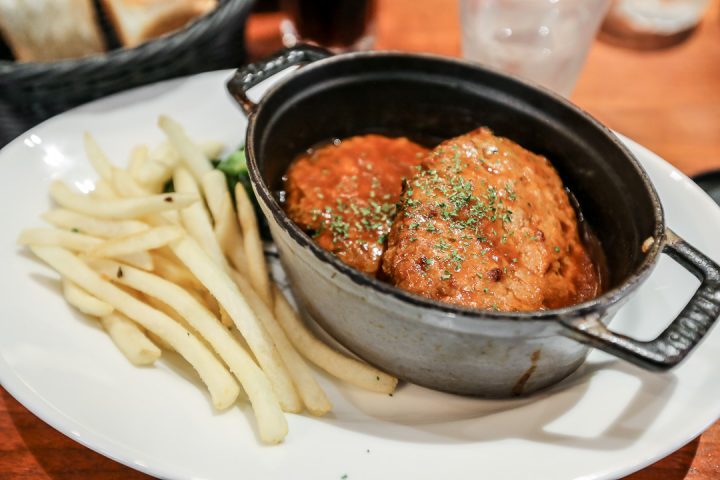 Then the pasta came next and like the Salisbury steaks it was light tasting as well, it lacks the punch of the tomatoes. 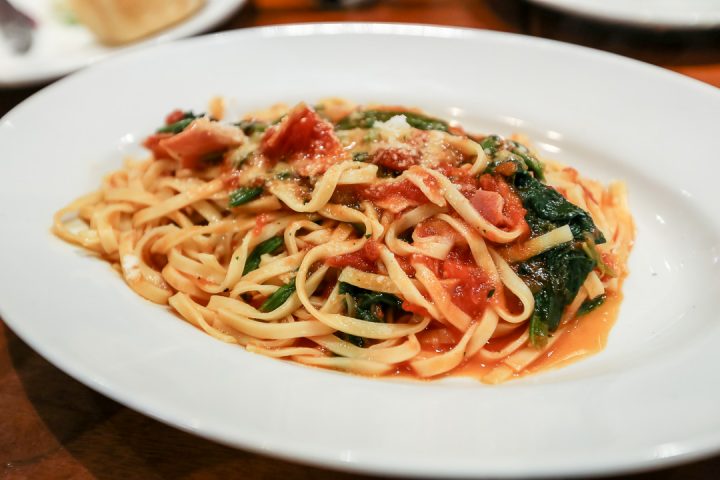 Then came the cheesy seafood gratin, you guessed right! This was light flavoured as well. 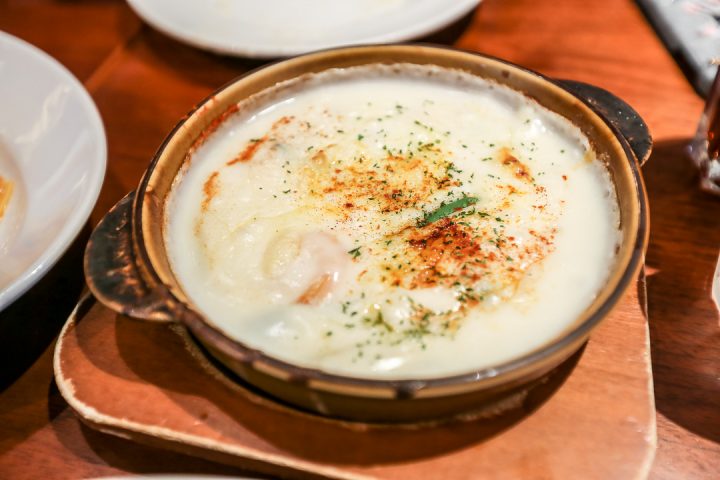 Though all of them have lighter taste they do taste good, it was just not strong enough but instead of our expected flavour it was replaced with the umami flavours. It was surprisingly good but in a different unusual way I was not used to. Think of it like comparing Italian spaghetti with the Filipino spaghetti, nearly similar dish but different flavour profile.

Definitely this was designed for the Japanese palate hence the delicate taste. 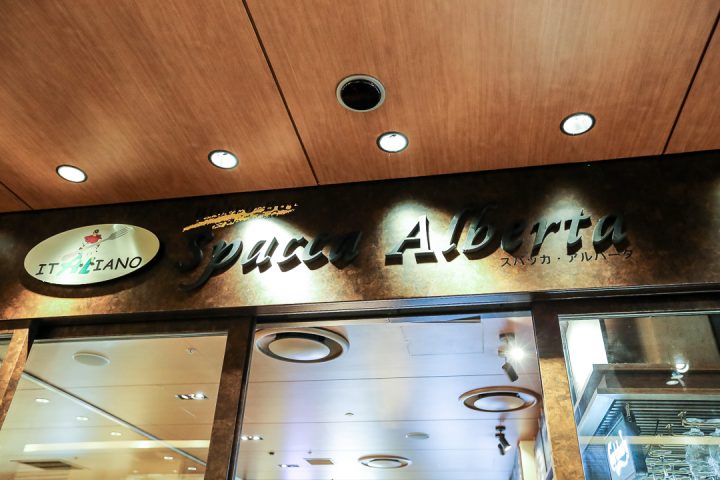 It was a good experience, food and staff was great. I even remember they serve water in a small glass and just refilled by the servers every time you empty it. I drink a lot and he did fill it more than four or five times, then he realized it would be easy for him to give me a large glass which he did with a smile.

I recommend this place but make sure when visiting it don’t expect Italian flavours as they serve Italian food designed with the Japanese taste in mind.