Air New Zealand might not be rated as 5-star by SKYTRAX but it definitely is one of the best economy class I ever tried, if its compared to cars you can call it fully loaded with all the gadgets and amenities but not the unnecessary luxuries. Their planes are mostly up to date specially the ones on popular routes like the one we recently used when we had our vacation in Japan, we flew using the new Boeing 787-9 Dreamliner.

I also flew using their older planes but the fittings are as par as the newer ones specially their entertainment system which is one of the best I tried in terms of content, usability and responsiveness. But were not here to talk about that, we are here to review the food they serve.


We had several servings on this to and from flight as it is sort of a long journey, 13 hours each way means you will be served at least 2 meals each direction plus some snacks, so let start with what we had on the way to Osaka. First food served was lunch since our departure was 10:30 AM in the morning. There were two options and we all chose the beef stew where it was served with an egg celery salad, lemon cake, Egmont cheese-, some crackers and the usual dinner roll. 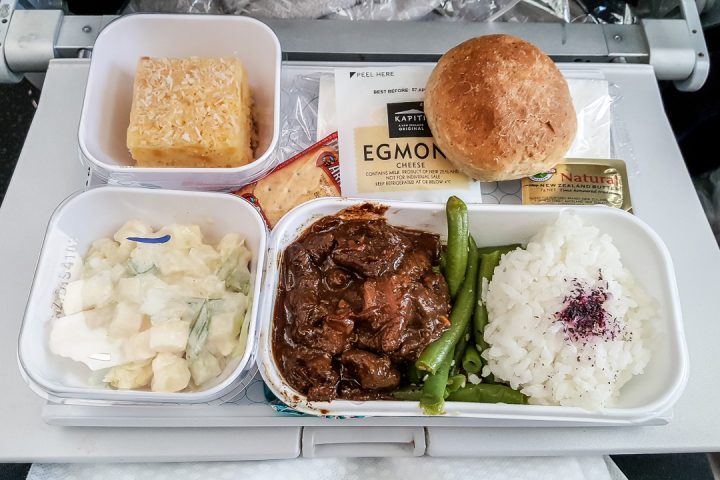 The stew was good, beef was so tender and tasty, I also liked the salad, I don’t usually love celery but in this salad it was a pleasure to eat with the creamy egg and dressing. Lemon cake was OK, nothing special but still good.

At this moment I noticed while watching my movie of choice the cutlery icon appeared on the side of the screen which means kitchen is open for extra orders. From here you can order anything you want, some are paid for but most are free, I am not sure if this is available for the non-Works passengers. 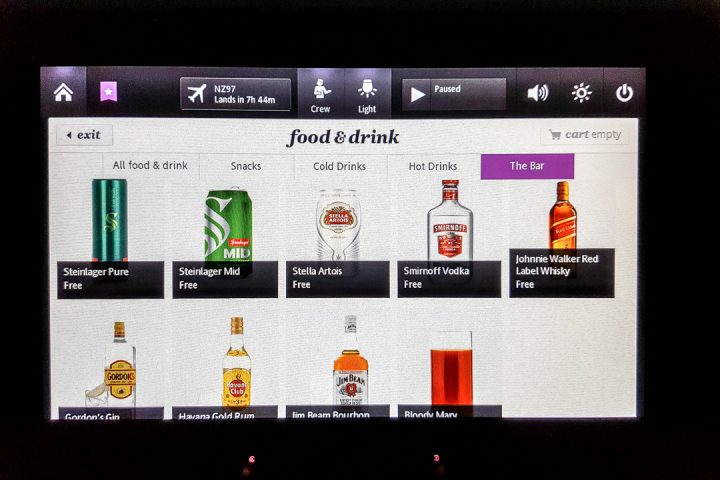 If you played with the entertainment centre a bit you will also notice there is an Air NZ Cellar so you can do your own wine tasting at the comfort of your economy seats, their system display information on wines they serve on board, so I tried a couple… Well three. 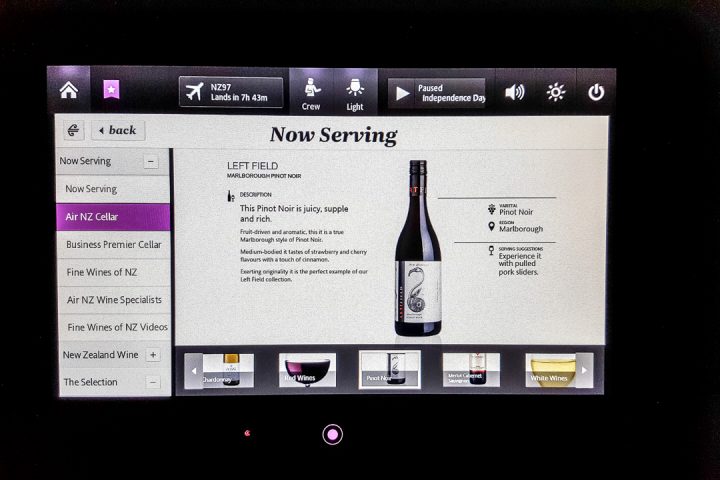 After the third glass Kapiti ice creams were served, there were no options for flavour and we were given the Summer Nectarine. It is one of my favourite ice cream brands so I may be a bit biased but yes it was delicious, creamy but still fruity, the hints of nectarine gives that nice clean taste. 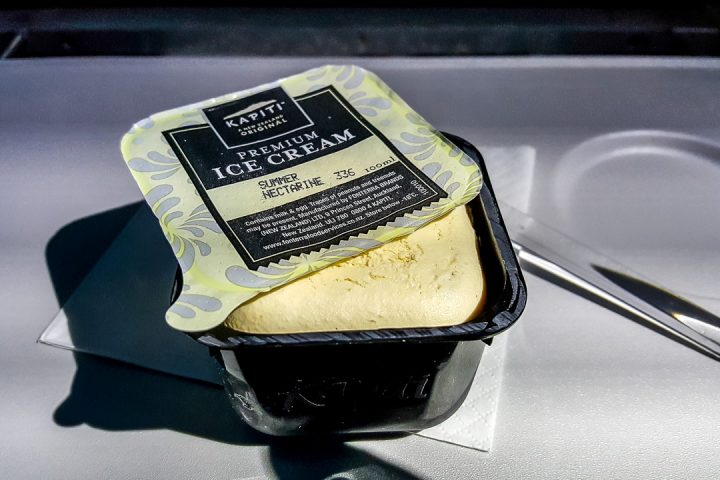 Then came the boring part, the long journey. I usually don’t sleep in airplanes because I can’t sleep in cramped situations, I think the maximum time that I can snooze is for an hour so I just watched every movie I can until breakfast was served.

Two hours and a half before touchdown breakfast was served and this time it was pasta salad, with miso glazed chicken and carrots served with rice plus a Pandoro caramel slice, more Egmont cheese, crackers and dinner rolls. 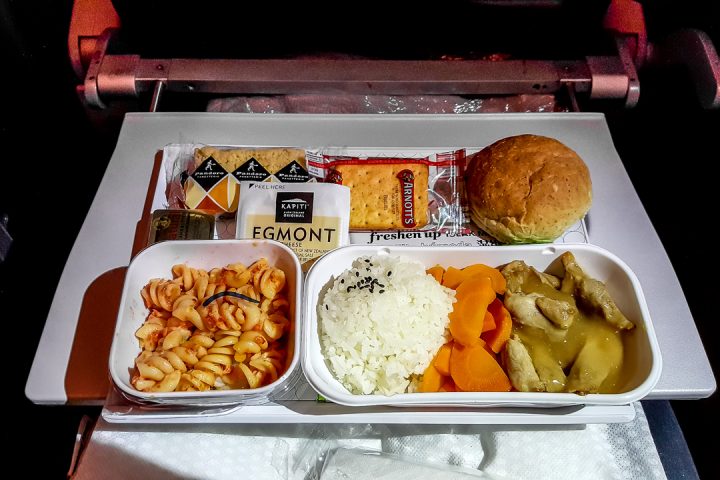 The chicken was really tasty thanks to the miso sauce which gave it a lot of umami flavours, the Pandoro slice was also very good, it was dense and chewy but not very sweet, nice way to end a breakfast. Few minutes later we touched down and we arrived safely in Osaka.

Now let’s fast forward two weeks and a half later and here we are going back to New Zealand, again it’s a direct flight so we have 13 hours to burn but this time we are departing at 9:00 PM so the first meal will be dinner then followed by a breakfast. Now its Japanese cuisine due to our origin and the first dish was chicken teriyaki with okra, kabocha and carrots, it was served with Tamagoyaki with different assortments (I don’t know their names) and matcha chiffon cake. I loved everything in it most specially the matcha cake. 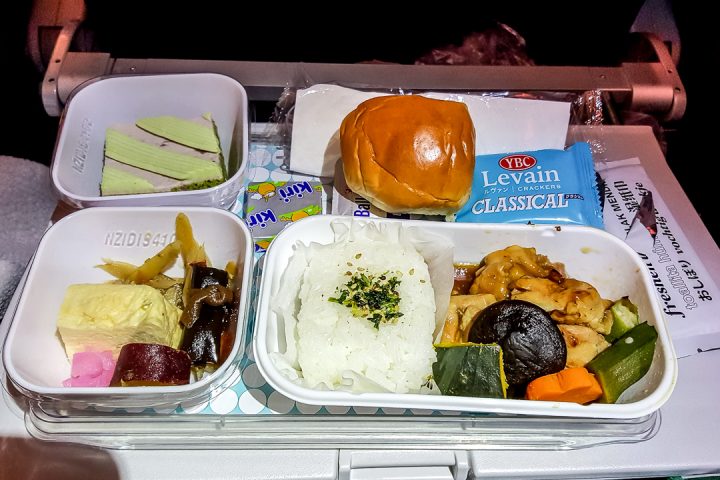 For those who don’t like poultry a beef option is available, same side but mains are made of beef, buttered vegetables and potatoes. 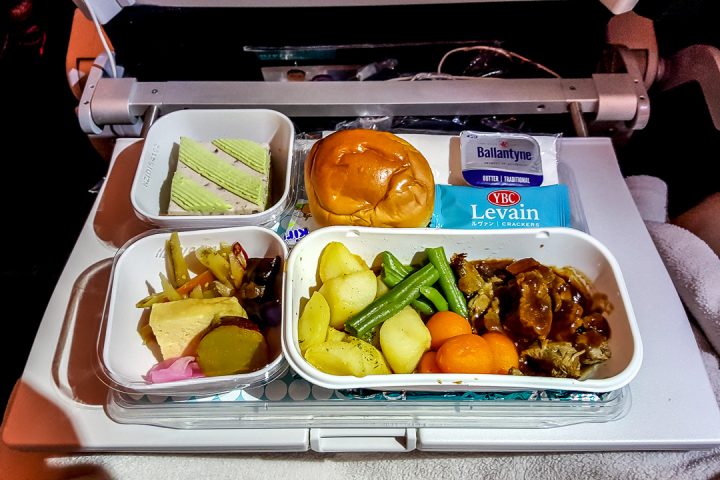 The omelette was good specially the different things it came with, different flavours and textures, it’s like a mini tasting platter.

The matcha cake was great as well, sweet chiffon cake with mild hints of matcha. Soft moist fluffy and most important of all its delicious. 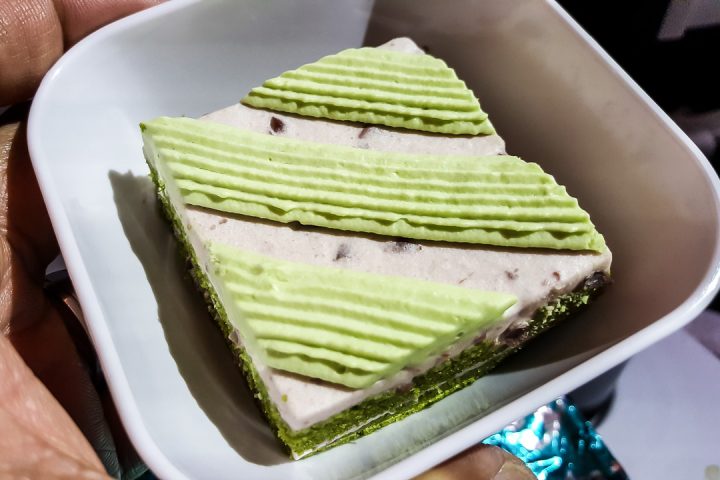 Then its snooze time, I had no energy after our travel and so many long walks I was so tried I need to sleep which I tried but partly succeeded. I wanted to order some snacks but never bothered as I was tired both mentally and physically. Then morning came I was quite weird in this Dreamliner’s as they don’t have physical curtains on window but an electrochromic window so you can’t really control it if the pilot or crew disabled it.

It also has that weird tint of dark purple when strong sun hits it, you can even see the shape of the strong sun outside. ITs good in blocking the light but you can still see some silhouette (it must be good with those eclipses). Anyways minutes later we can now control the tint so you can fully make it clear if you wish to.

Breakfast then came with two options first was Japanese style where they served salmon with rice and vegetables, fruit bowl and a yoghurt. I had this option 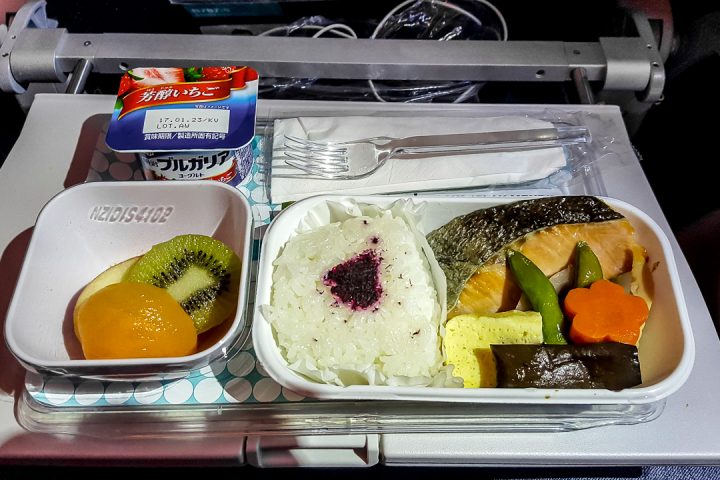 then there is this usual bacon, egg, hash browns which my daughter had chosen 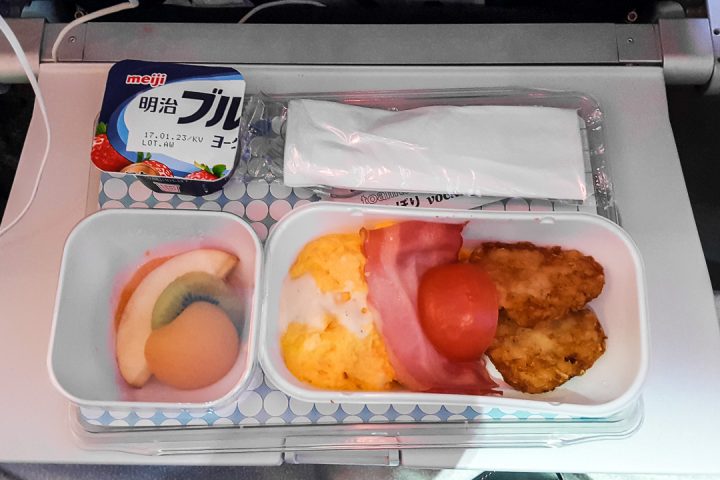 nothing special on the second option but for the salmon I really like this style of breakfast.

It was a pleasure riding and dining using Air New Zealand, staff were great and serve you with a smile, you can even see some of them love what they are doing just by how they serve you.