It’s my second time here but this time it’s quite special as we are not getting our orders from the menu but as a special request, we are having a boodle fight for my team at the office. It’s quite nerve wracking as I will be tagging along 25 of my colleagues all of which are non-Filipinos apart from three including me, I don’t know how would they take it but I educated them a lot by explanation and directing them to one of my articles about it.


This occasion is some sort of a Christmas party but only for our team, we have a much bigger party for our company. I was playing with this Boodle fight idea for the longest time for my team but I can’t find a suitable and accessible place to have it until I tried Boracay Garden. Located in viaduct its quite near our office at the same time the place is nothing to be shy of so this is it. 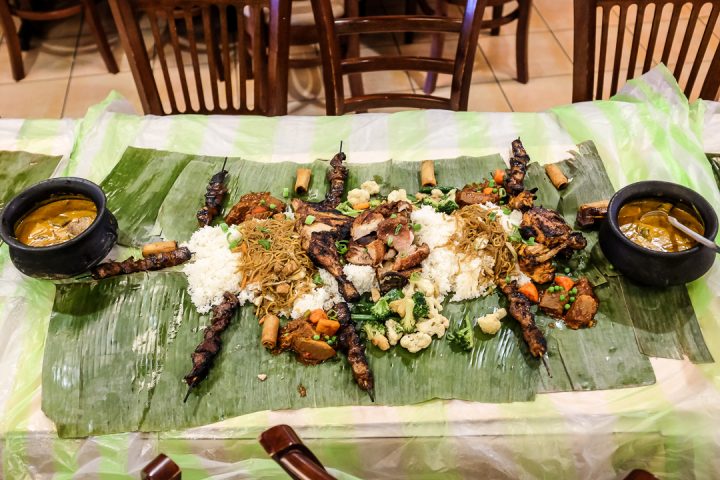 First stage is asking Marjorie the owner of the place whether we can have Boodle Fight at her restaurant, gladly she agreed and she was doing this once in a while when someone requests but it’s not on their menu. After that we designed the menu specifically so that non Filipinos will enjoy it, so I told her not to include any type of fried or dried fish as well as bagoong, from there I played around with her suggestions. Initially she was suggesting 5 viands but after several phone calls, discussion and alterations we ended up with 8 viands with dessert and ice tea for just $47.00 per head. 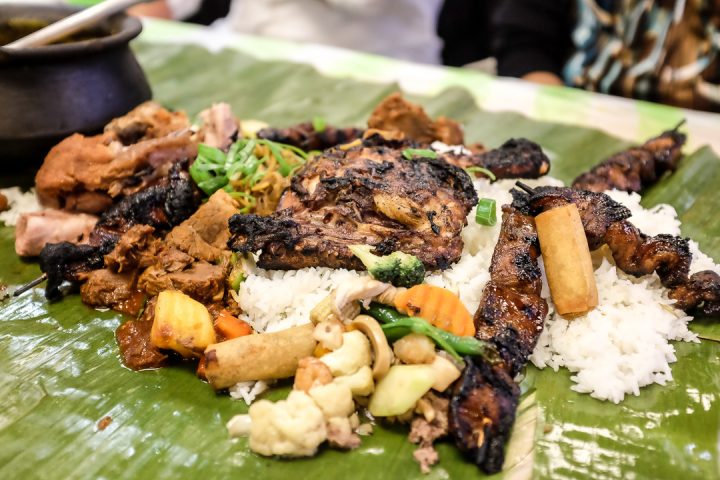 The menu that was finalized was made out of Crispy Pata, Chopseuy, Kare-Kare sans Bagoong, Caldereta, Grilled Chicken, Pork BBQ, Spring Roll, Mixed Pancit and Rice. Dessert was Halo Halo and for the drinks it was iced tea. And all for $47.00 this was a steal.

Then the day came and while waiting for our tables to be assembled we started to drink, I ordered Red Horse for the men, our office is well known for a really good drinking culture so this is the perfect drink for us. For me I started with Pale Pilsen as I am not a heavy drinker like most of them. After some 2 to 3 bottles or Red Horse each then its boodle time. I like how they prepared it, in sections they carried each freshly cooked viands on to our tables until its assembled into one long table. My colleagues are impressed but will they be impressed with the taste?

As we started to eat they were initially conservative, picking dry viands first only with two fingers until we explained how to eat them. So I divided 3 of us Filipinos on each section so we can show them how it’s done, plus we have one Indian lady on the team who also eats with their hands once in a while. Minutes later they are all enjoying the food, gorging on it while I explain what the dishes are. I was surprised they nibble on the bones of the crispy pata as well.

I asked them if they liked it, most if not all of them said yes and what they liked the most is the Filipino style barbecue on sticks and the crispy pata of course. It was a success but we lost the battle, there was so much food I think I can feed twice the amount of people I brought. For the Filipinos they also loved the food and really enjoyed it and like the Kiwis we also loved the crispy pata.

The desserts then came and they were surprised that there were desserts, I specifically requested for this one as I though they will like it so much I was wrong they did not like it but did not hate it either, they are quite neutral on it not because of the flavour but the ingredients, of which most of it they enjoy on savoury dishes like the chick peas, white beans, red beans and yam. Plus, they are already so full with the boodle fight and for them this is another full meal. The ice tea was barely touched as well, it was sweet for their preference plus they drank a lot of red horse while eating, in fact we ordered a lot we wiped their fridge clean of all the red horse stock they had that night (yeah our company drinks a lot and at this stage we were not drunk yet).

It was a success, my colleagues loved everything on it. The concept, the flavour and everything, in fact one of them told me it’s like a Christmas family dinner where everyone is gathered in the table sharing meals with family member from one pot, she said it has the same feeling, the feeling of closeness to each other, the spirit of dining in with your loved ones. They also liked the freedom of eating with hands, its messy but it was fun, like a kid playing in a puddle of mud. They really liked it, in fact my boss asked me to do this again in 6 months’ time. For a company event this is really affordable, many options are laid in front of you, it’s some sort of a team bonding exercise plus it’s fun, definitely a good suggestion when you want to have a team dinner together for your team.

For us wanted to stay longer, first because there was still some food on the table and we don’t want to wonder around looking for another place but since the beer fridge surrendered to us we have to find another watering hole to continue the fun.