Hainan Chicken Chop is a dish of crispy fried chicken chop served and drenched in onion gravy with fried potatoes, tomatoes and mixed vegetables. Just basing on the name you will instantly think that this dish is of Chinese origin, partly true because it was the Hainan people who created them but not in China, this was invented in Malaysia during the time when British was dominant in the region. This dish was made by the Hainanese communities that migrated to Malaysia during those times, Hainanese cooks and operators of coffee shops primarily cater for their British colonial masters where potatoes and meats are their preference for meals, this is where Hainanese chicken chop was born.

A true mix of Chinese and Western flavours that is only found in Malaysia, it’s not to be found in Hainan or even in UK apart from specialty Malaysian restaurants on those places if there are any. If you will closely look at its ingredients you will see how it tried to fuse two different cuisines, chicken that is deep fried most probably came from the Western together with fried potatoes, vegetables and gravy but how its prepared is so Asian since the chicken usually is marinated in soy sauce, five spice and sesame oil then coated with potato or tapioca starch instead of wheat flour. Potatoes are sometimes optional as rice is often served with it in traditional restaurants in Malaysia.

I love this dish, the unique texture and flavour of the chicken is impeccable, its crunchy, chewy, juicy and full of umami, pair that with a nice rich onion gravy and perfectly cooked potatoes this is what a comfort food should be.

Bringing it all together 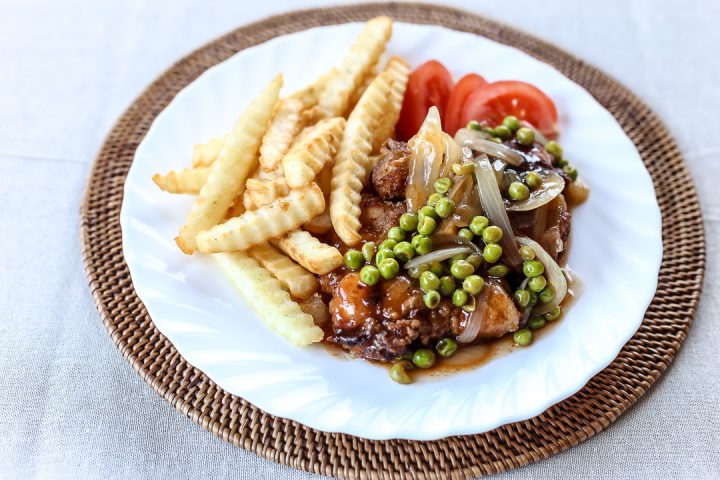