Last week we shared my Emirates experience, that was the airlines I used going to Sydney now going back from Australia was a different story as I will be departing form Brisbane hence I had Qantas instead. Qantas is not a bad plane but it is not as the same level as Emirates, it was clean and provide for the basics. Entertainment is via in flight Wi-Fi through their local server in the plane which means you will use your device to stream content, but be warned you need to download the app first before flying as you can’t download it on the plane as there are not internet access, Wi-Fi is just for local networking in the plane.

Food was no frills as well, when you order beef or chicken it will be really just that, no salads or what so ever you just get the main dish. During my flight I ordered the lamb shanks, I can’t remember the dish name but I remembered how it tasted because it was good, the meat was quite chunky as well and not chopped into small pieces, it’s just one big slab of tender goodness. What I do like more though was the bread it came with, while there was no butter served the bread comes with butter already melted in the middle, I really liked this because this was my issue with airline dinner rolls, they are served with cold butter which is quite hard to spread. 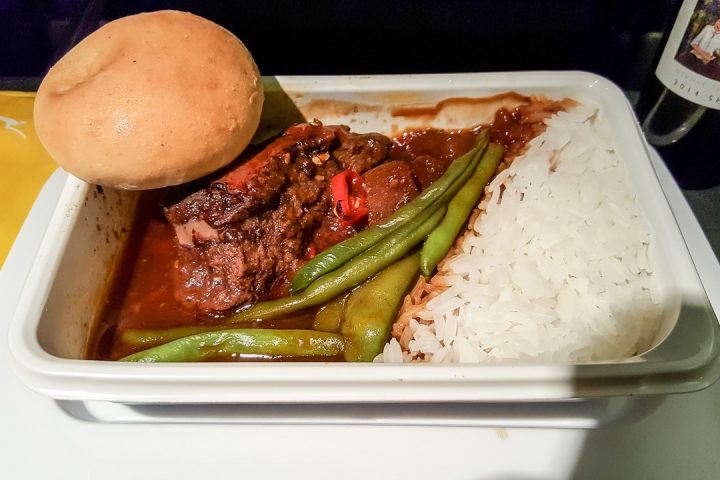 The wine selection also was good, and like Emirates they give it by the small bottle, again I asked for a Shiraz and they gave me a Hesketh Midday Somewhere Shiraz 2014, with hints of black plum and liquorice it was a good wine with the lamb, nice depth and strength.

Desserts came last and not with the mains serving where we are given some ridiculously frozen Weis Mango and Toasted Coconut Yoghurt Bar, it was so cold it will stick to your tongue like freezer ice. 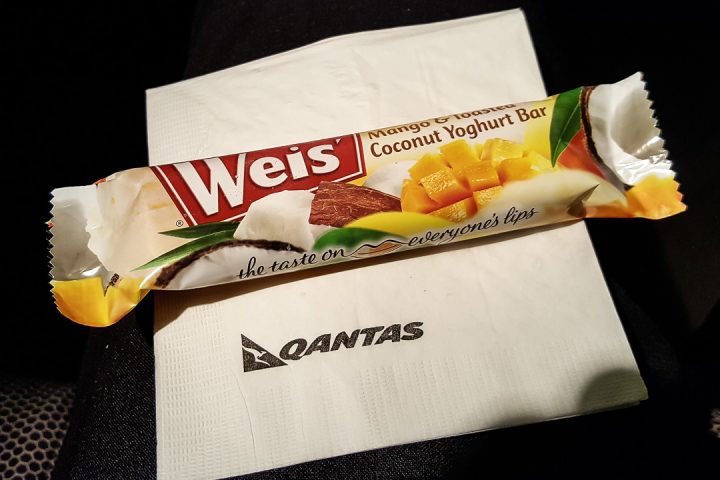 I guess they just don’t want it to melt while serving hence the temperature. I liked the dessert in fact I was looking for something similar days after I landed.

So how was the food experience?
Well the food was good, the lamb was seasoned really well, great flavours and arrived in the perfect temperature. Surely it was no frills but you get what you pay for anyways I am not complaining as the service was also great, I think the only downside for this flight was not the food but the lack of screen for inflight entertainment, which leads you to use your own device which gives another issue as you don’t have any place for it to hang, I hope they put phone or iPad holders in the future so you don’t end up holding your device while watching a full movie.