Filipino Tamales is a dish highly influenced by Mexico where rice, coconut milk, chicken, boiled eggs and sausages is cooked with rice flour and coconut milk wrapped in banana leaf then steamed.

Tamales like most of us know is a popular Mexican dish, but did you know there is a Filipino version of it? While Philippines cuisine is usually associated with the Spanish cuisine did you know that Mexico has an influence as well? Champorado, avocado, azucena, cereza / aratilis, sayote, tsokolate, menudo and pipian are the main ones but there are many too mention in this post. This all happened during the Manila Galleon Trade (1565–1815) where there was heavy trading between the two countries. Mainly spices were traded during this times but as an effect other things like culture, traditions and even cuisine have been introduced to the Philippines and our dish today the Tamales was one of them.

Filipino Tamales is a dish highly influenced by Mexico where rice, coconut milk, chicken, boiled eggs and sausages is cooked with rice flour and coconut milk wrapped in banana leaf then steamed. It may look like both dishes are different if you investigate closely both concepts are similar where starch and meat is steamed in a leaf, the Mexican version was just adjusted to the local ingredients available that time in the Philippines hence corn husk was replaced with banana leaf, corn flour was replaced with rice flour and fillings are replaced with what’s readily available during those times.

Honestly I never had tried this in the Philippines, I only saw them but never had a bite ever until a Filipino colleague of mine asked me whether I have this recipe on my blog already. I did not know how to prepare them so I asked what it is made of and after some online research I have a recipe. I did not know whether it tasted like how it did back home so I brought some to the office and let him try, guess what? It was a success, I am glad that he told me it was the same taste and texture of what he grew up with.

Personally I told him I am not an avid fan of this dish even the Mexican version, while I like what I made, this is not the dish I will crave on a regular basis. I might not be used with the texture as I never grew up eating them but I guess I will start to love it after 2 or 3 more tries. Hopefully someone tries this recipe so I will have a second opinion and see whether I really made this correctly.

Filipino Tamales is a dish highly influenced by Mexico where rice, coconut milk, chicken, boiled eggs and sausages is cooked with rice flour and coconut milk wrapped in banana leaf then steamed. 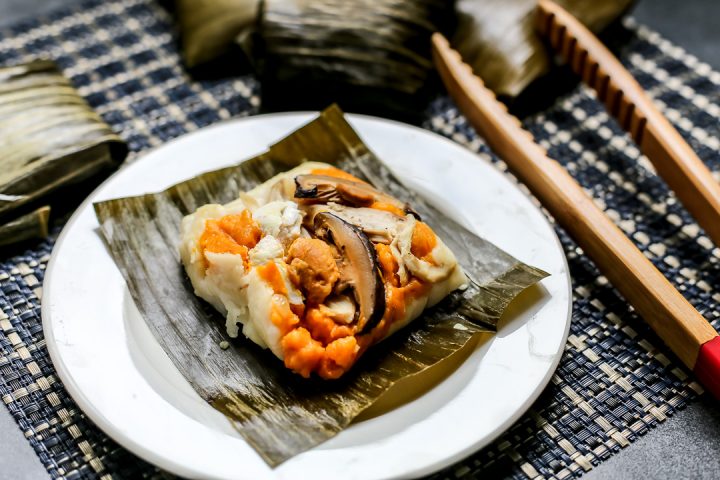