As promised last week here is the part two of the Good George Brewery Tour, if you have not read the first part I suggest you do so before reading this. Like I said I divided this story into two where the first will showcase the brewery tour and for today we will be focusing more on the food.


It all started with a tour then ended up with this post that basically spanned two days, little that we know the things that we drank that night will be a part of an Amazing Race team building activity we are partaking the next day. It was a good night out lots of booze and lots of great food, and like most of my office activity when I say booze its free flowing until you give up. So continuing on where we left after the tour we then were back to our seats ready to order, with an amazing selection on the menu it was quite hard to decide.

That is why we decided between my colleagues sitting beside me to grab all the different platters and try them with the addition of one steak and a pizza as there were four of us and only three platter choices. It was an easy decision and the hard part was just waiting. 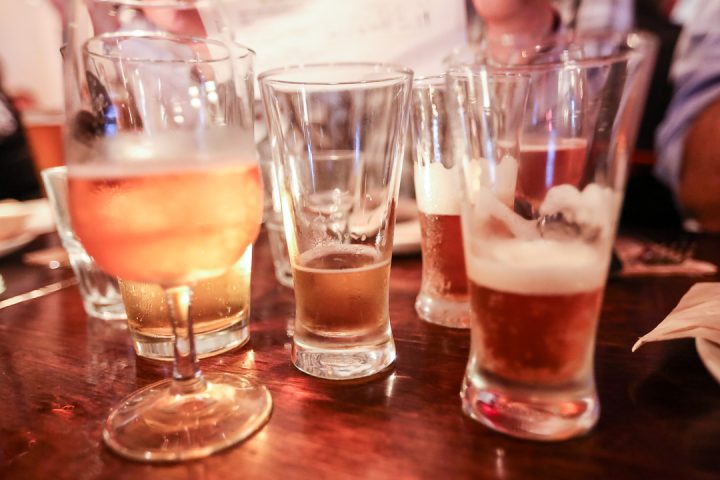 As well as the ones we ordered separately

Time passed by and we never had noticed it as we were having lots of fun then all of sudden our orders kept on flowing one by one starting with the Good George Platter which is a platter of Crumbed fish and squid rings, battered onion rings and chicken nuggets and cheesy garlic bread served with fries, Ale-oli, BeerBQ Sauce and chilli herb sauce. ($29.50). Yes that’s a lot of fried stuff in there hence it usually serves 2 to 4 people depending on your hunger.

Then came the Kapiti Cheese Board where cheeses like Aorangi brie, Ramara, Tuteremoana aged cheddar and Kikorangi blue are served with crackers, candied walnuts, dried apricots and house made Doris plum fruit paste ($21.90), again this serves 2 people but with our orders I guess it can freely serve at least 4. 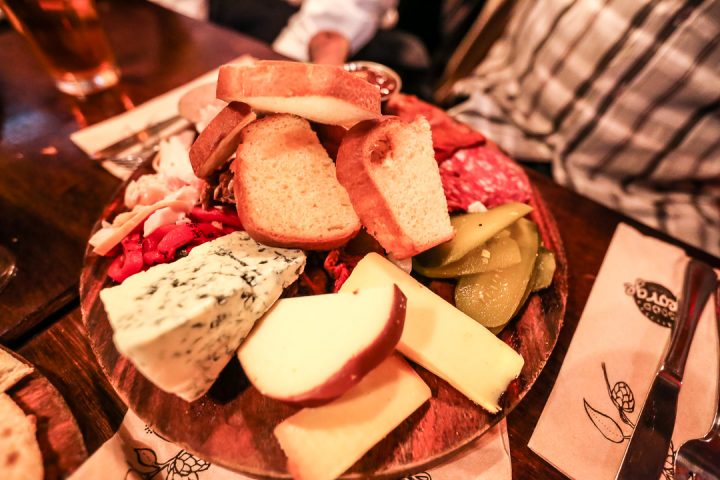 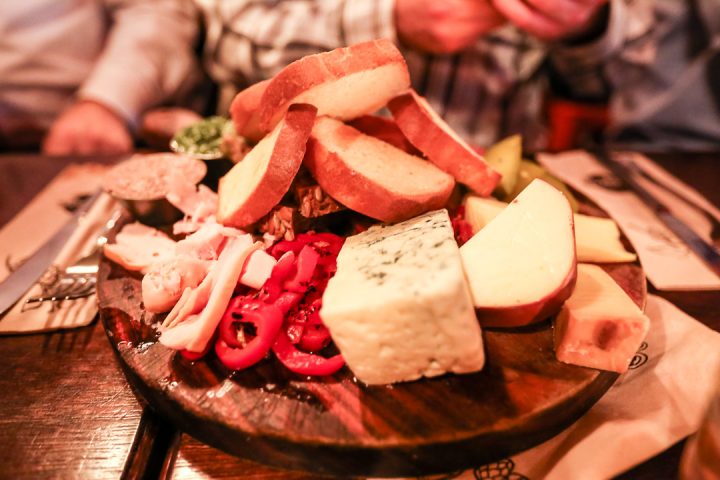 Then if that’s not enough well we had this one as well the Mixed Platter, basically a platter for those who can’t decide. It has every meat there is like Ribs, pulled pork, venison sausage, hopcorn chicken, mint apple slaw and criss cut fries with Amber Ale mustard and Sparkling Ale-oli ($48.00) 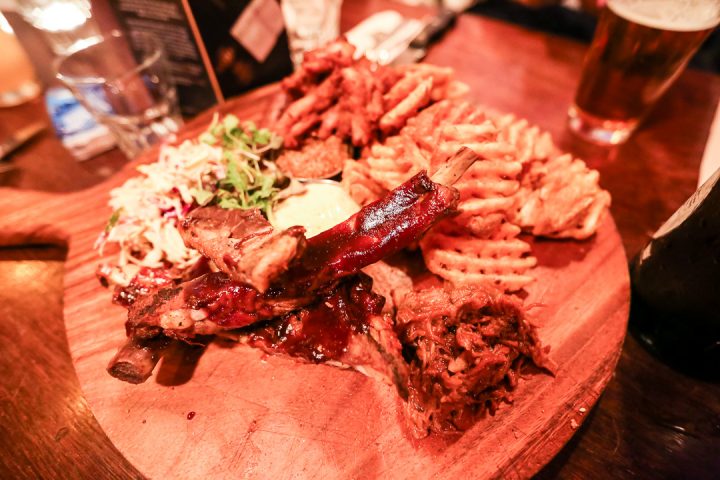 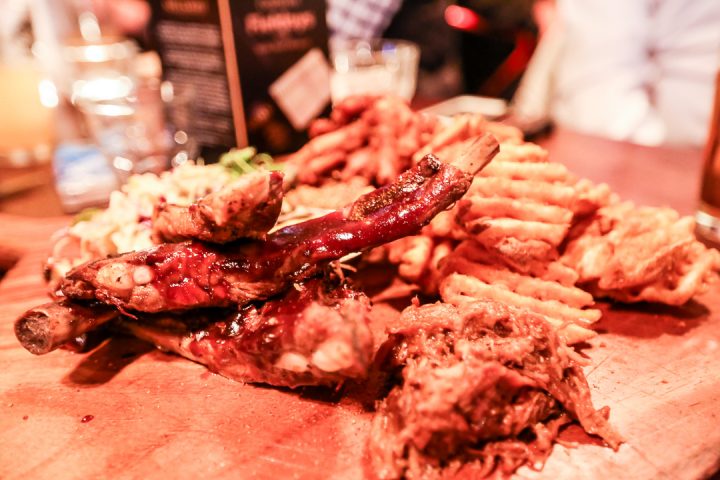 From here on even we haven’t started yet I feel like having a food coma just by looking at the large platters in front of us and still food and drinks continuously flow. After the platter this Pizza Candice came, basically a thin crust topped with Smoked chicken, mozzarella, red onion, bacon and brie on a Doris plum puree base topped with roquette. ($22.90) 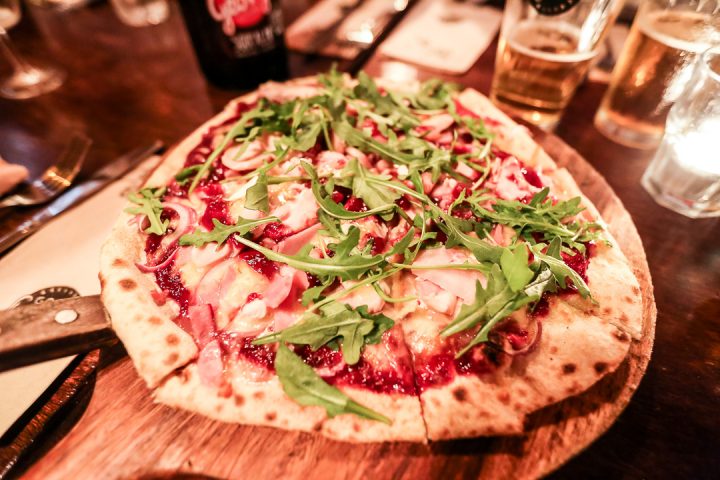 And then this steak called GOOD Rump which basically is a 300g Rump steak with creamy Amber Ale jus and IPA mushrooms. Served on smoked mash and garlic vegetables or criss cut fries and fresh salad. ($35.00) 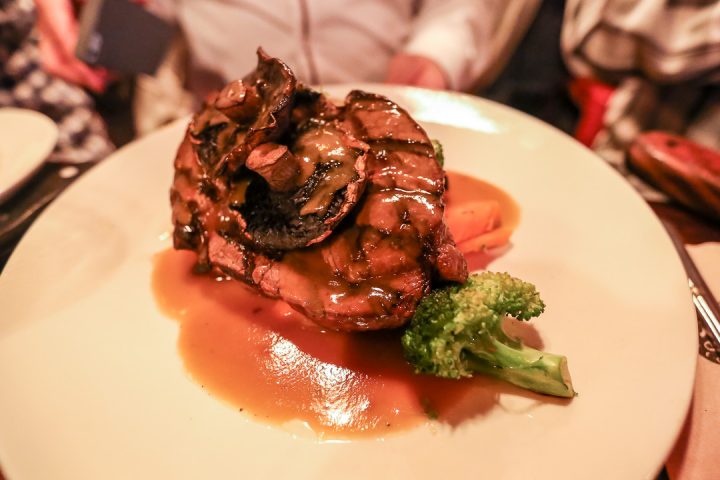 And yes it stops there on day one but that does not mean we consumed it easily. We had a hard time but a good hard time as the food was amazing, from steaks, the pizza and even the meat board everything was cooked perfectly, I can’t complain even the smallest things like the sides it came with was done with perfection in mind. It was really a great pub food!

It was too much too handle hence we shared a lot of this with our other colleagues and from their eyes I knew they liked it as well like we did.

This is just for this night, we continued on drinking until midnight but I slowly moved on from beer mode to whiskey mode as I was so stuffed with all of that goodness you see above. We stopped around midnight as we have an early rise for our Team Building activity the next day.

Day 2: Now were all stuffed with food then we had this amazing breakfast buffet at Novotel Hamilton, I was still to sleepy to take photos after going back there after midnight. We are also told to dress up in futuristic outfits for the Amazing Race event and what we chose for our team was Star Wars, so I wore Darth Vader costume and my team mates were the Storm Troopers it was a sight especially when you are running around the city doing crazy stuff. Other team wore Matrix, Futurama, Flintstones (I don’t know why), to name some.

We then were given a task folder where we have to do certain activities with points attached to them and the team with the most points win. We then ran grabbed the cars and performed the activities like finding pit stops, solving clues and performing some crazy stunts some involving the public.

The last part of the race is to find the other Breweries location and in there we were tasked to identify what beer names are there on each glass, I did not paid any attention on what I drank and only remembered my favourite ones, we did not get it all right but we had enough points to win the whole thing. Yes we won it, I guess it all boils down to team work and our perseverance to do each activity.

After this there were some awarding ceremony where the looser will sing the national anthem as we go into the podium (not a real podium), we were given some medals and a lot of rights for bragging. After this we were offered some lunch, I think everyone was still stuffed and drunk a lot of them grabbed some light meals.

My colleague also wanted to share so she grabbed some pulled pork bun made with braised pork on a hot dog bun served with GOOD slaw, apple & pear relish & fries ($16.50)

The pulled pork was the same pulled pork on the platter so I did not have a lot of it. For the seafood pasta again it was amazing, as expected I would love it my only comment is that they should have used clams instead of mussels so it would be tastier, anyways that’s just me.

I guess I had said enough and I know you guess what my verdict was, yes this place is highly recommended food, drinks and anything in between was great apart from one waitress who was grumpy when we asked her for one answer in one of the questions on the Amazing Race.

I would definitely go back regardless it’s in Good George Brewing or Good Neighbour, it is definitely one of the best pub food I ever tried.