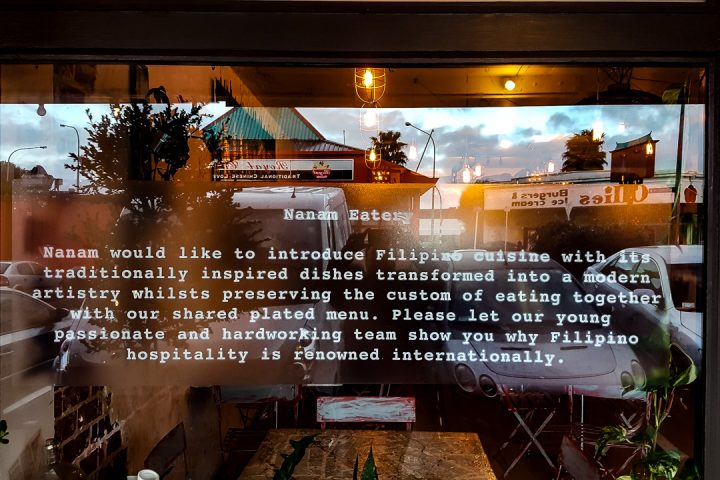 It’s exciting when you see Filipino restaurants opening in a country apart from the Philippines because our cuisine is not that popular compared to our South East Asian neighbours. So far in there are at least 8 Filipino restaurants in Auckland that I know but not all of them I am happy to recommend as some of them have bad service and others are already closed but so far I loved three of them namely the Gold Ribbon Filipino-Asian Restaurant, Chicos and the restaurant we are highlighting today, Nanam. There are also two that I haven’t tried but I had heard from friends of mine that they are good as well, I will just need to find time going there. These two are Boracay Garden Restaurant and Turo Turo. The three that I mentioned specially Chicos and Nanam are those restaurants that you will not be shy bringing along your non Filipino friends to try Filipino food as they prepare it not just with taste in mind but even aesthetics. 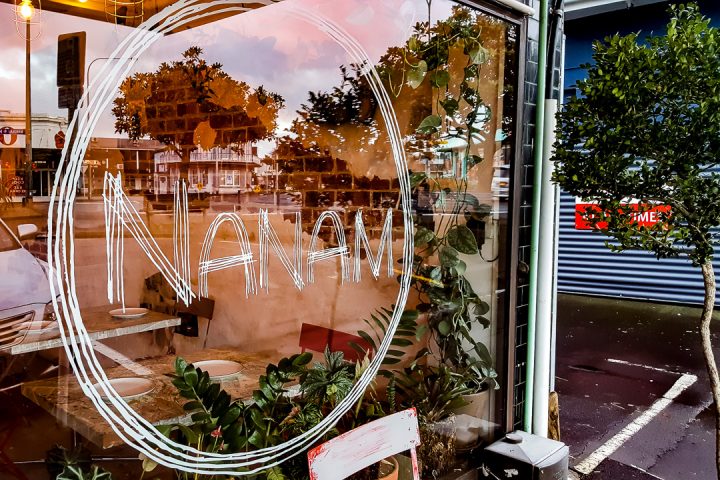 Nanam is located in Royal Oak near the outlet shop Dress Smart in Auckland so it’s a perfect place to have lunch (on Saturday) or dinner specially for the sale loving Filipino, just in front of the popular Ollies Burgers & Ice Cream it’s not really that hard to find. We came in there after our doing our shopping in Dress Smart after a Filipino colleague of mine recommended it, we were there quite early but that was a perfect timing because after 30 minutes of us sitting inside the place suddenly became full of patrons and what’s nice is that we were the only Filipinos, most of them were Kiwi’s.

So what does this place offer? Well like Chicos this place is more like a Fusion Filipino restaurant but I guess Nanam is more Filipino than the other. Why did say that? Well because if Chicos love to play fusion with other cuisine, Naman does that but the majority of its fusion is more with the same Filipino cuisine so instead of traditional dishes they had reinvented how dishes were prepared and presented resulting to a totally unique concoction.

Some dishes like Longganisa mixed with peanut sauce most probably from Kare Kare, Octo Express where octopus is mixed with Bicol Express, Dinuguan where Lechon Kawali meets dinuguan and Roast chicken Sinigang where Lechon Manok meets sinigang are just some fine examples of what the Philippine cuisine has to offer when extended as a fusion. 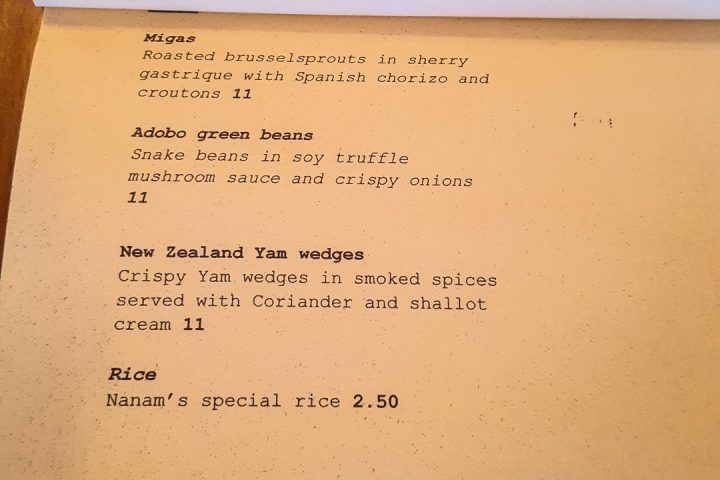 Having said that the fusion with Western cuisine is not shabby at all, their Inasal Beef is made with Wagyu bavette, the Adobo croquettas are made with lamb and even their Sinigang sa Bayabas where it is made with Salmon. All sounds tasty but what did I tried?

Like I mentioned there are too many good choices but I only have one stomach so I opted for the “Taco + Siopao = TacoPao” ($14.00) which is sticky pulled pork, pork chicharron, homemade pickles and peanuts served on what they call “Nanam” buns.

For mains it has to be dinuguan ($25.00) which like I initially said was a different take to the usual stuff, basically it is made with crispy pork belly, pork shoulder in black pudding sauce served with pickled Bokchoy, seeded mustard and green chilli chutney.

And for the dessert it will be the Halo Halo ($12.00) which again is not the norm, made with lemongrass ice cream, pandan granite, “UBE” purple yam mousse, Leche Flan “Milk Custard”, adziki beans, Rock Melon, Coconut Jelly, kumara and Peanut Filo Crisp.

So how was it?
Well as far as the looks is concerned they all exceeded my expectations, they are master chef quality presentation. For the taste, well I liked most of it specially the taco pao that is why I recreated them at home and posted my own version yesterday , it would definitely be a regular food item that I will make once in a while at least for a year from now. The halo halo was surprising as well, even though it does not have the traditional ingredients it captured the essence of what halo halo is, the rock melon was a great addition, whoever thought of this deserved more than a gold medal. As for the dinuguan I was quite a let-down, I just wish it was served as a crispy pork belly without the blood gravy they call black pudding sauce, the pork was perfectly cooked, it was crispy but it was not that flavourful as I expected, it was good if the gravy has more flavour to it but it was also quite bland for my Filipino palate.

I noticed they don’t give it much flavour like how it is traditionally made which I think was great especially when you want to introduce the Filipino cuisine to non-Filipinos, I guess that is why most of their patrons during the time of our visit was non-Filipinos. Overall the food was great and I am just expecting a bit more than the usual, I guess a patis on the side will help since most of the Filipinos are used to that condiment used on a regular basis. Will I recommend this? Definitely! I guess Chicos now have a good competitor, I would love to bring my colleagues here and let them taste our food adjusted for their palate and preference.