My last busines trip outside of New Zealand was in Gold Coast, I stayed 4 days and I already missed the Auckland Asian food (yeah Auckland is looking more like China now compared to before) luckily on my way back home I saw this noodle place in the airport just after the security gates. It’s not hard to miss as it’s just after the security gates on the left, in fact this is the first stall in there.

I cleared the gates jsut before 12:00 noon hits so there was not much of a queue yet, I noticed the staff looked like Filipino and I waited them to speak Tagalog with each other, seconds later they chatted in my native language. I then greeted them in Tagalog and I was greeted with great smile, it’s nice to see a fellow Filipino like this overseas and I think I will share the same sentiment with others as well.

I then asked them what is thier best noodle dish, they said its the combination noodles which is made out of hin egg noodles with char siu roast pork, lean beef, wok charred chicken, prawn, shrimp and fresh vegetables, wok tossed in their original master recipe oyster sauce ($9.95 / small). The attendant told me it tastes nearly the same as a pancit canton, a nooodle dish popular in the Philippines. I told him I love it hot and spicy so he adjusted the order to accomodate my request. 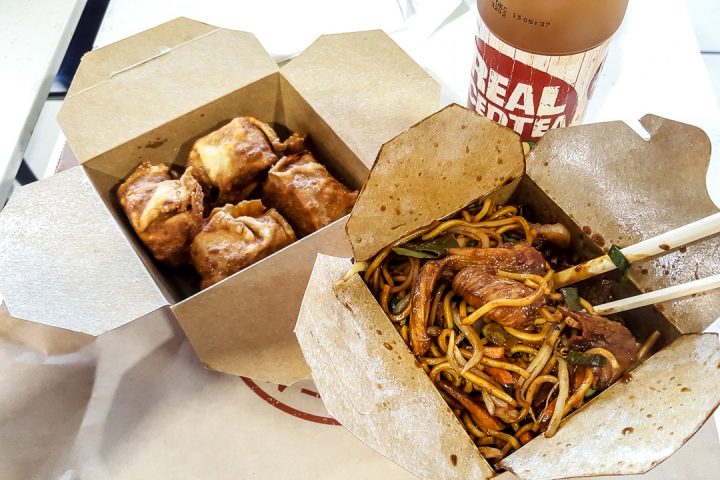 I also ordered some 4 pc dimsum ($7.50) thinking they were steamed and small but I was wrong it was the total opposite its was fried and huge, perhaps just this alone is enough for lunch.

So how was the food?

Well it was quite what I expected, it was delicious and since it was prepared by a Filipino staff the flavours was close to home. It was indeed a spicy version of pancit canton and I really liked it. The dimsum was quite a surprise but it tasted great as well, I think two of them was enough when you have a small noodle dish.


Overall I would recommend this place specially if you are Asian as the flavours was spot on, add to that a great staff behind it then you have the total package.