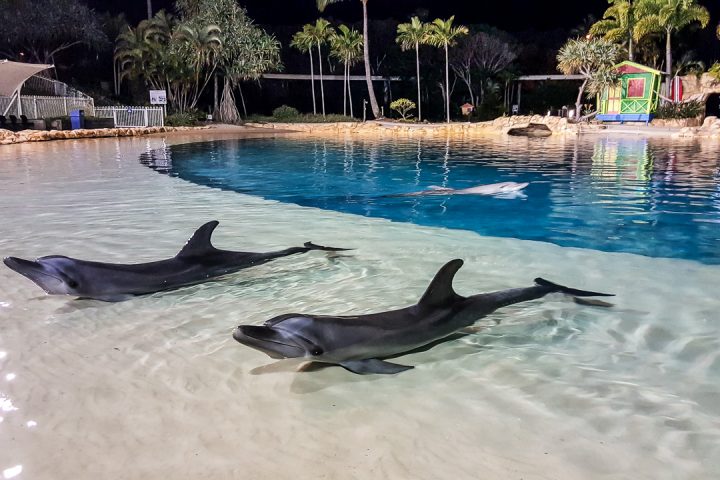 When I was in Australia attending our annual team leaders’ conference for our company several months ago one of the highlights was a party in one of Gold Coast theme parks, the Seaworld. When I was indicated on our itinerary I though it will in just one large function hall but the park was still open to the public, I was wrong because we have the whole park for us and this is how amazing my workplace is.


So we went there from our hotels chauffeured on several tourist buses wearing eclectic costumes themed per team, the whole event theme was “big things comes from small packages” so imagine what my team wore. I will tell that later but the costumes were amazing some were iPod complete with LCD menus and LED lights, angler fish, bumblebee, babies in diapers (yes they were using adults diapers only), condoms, m & m’s, Cinderella and the 7 dwarves plus many more to remember, our costume was not on that list as usual were the geeks of the company so we will dress appropriately for the occasion and we had chillies as our costumes, I bet you never had guessed that.

Though we the rides were not open for us for safety purposes (we party really hard, meaning we drink a lot) we have a tour of the backstage showing what the sea creatures are doing at night when the lights are off. It started with some sort of a dolphin show, they did not perform stunts but greeted us with nodding heads and great characters show-offs then we head off to the large aquarium here sharks and stingrays swim. We also had a view of the large aquarium.

After the mini tour we headed towards the function house where we partied all night. There was a lot of drinks as we have an open bar and a lot were already loaded up with booze even before the food was served. Though what was served was not a typical of our company as they do feed us real well, I guess you had seen on some my post but the food was ample enough to fill us up and keep going for the night.

With poppadum’s and basmati rice on the buffet platter I thought we were having some curries, well they look like curries.

To my surprise on my first bite they were not, in fact they were like Filipino dishes called “ulam” served with rice. First was this type of beef stew that tastes similar to caldereta without the chillies and tomatoes.

They were good but the poppadum’s and type of rice used misled me.

I ate a lot because the food was served quite late and I enjoyed what I had. After that finger food started flowing left right and centre, I can’t even remember what they all were but there were at least 6 choices. I was quite full to have another feast so I just had some chicken, tempura and samosa.

After this I was full of energy and went on the d-floor to burn all that intake. Together with some unlimited booze I can assure you we had a great party that night.