I wanted to make this for a long time as I was inspired by a colleague of mine who made one and gave a couple of jars to me, she said she makes Tomato Sauce at home specially when she have lots of extra tomatoes grown from her garden, it’s a perfect way to store them rather than let them rot and not be used. Last weekend I still have at least a kilo of tomatoes on my vegetable bin after being lazy not cooking something at home, it is still cold in here and moving around the house is not a big priority at the moment, I just want to be in my warm bed covered in a very comfy duvet. Luckily the sun was out and it gave me an energy boost to move and start cooking.


As I opened the vegetable bin there I saw this big bag of tomatoes wondering where to use them, I suddenly remembered that amazing Tomato Sauce jar my colleague gave me so I made one. It’s quite time consuming making this and definitely not as convenient as opening a can but trust me its leap years away compared to the taste it can give, reminds me of the tomato sauces I tried in Italy before.

By the way before I continue further I just wanted to clarify that this Tomato Sauce is the Tomato Puree in New Zealand, its quite confusing when I first came here since for all Filipinos and I guess even Americans call this Tomato Sauce but in here Tomato Sauce means Tomato Ketchup so the correct name for this here is Tomato Puree, it’s that American vs British English thing. Just imagine my first afritada, how did it tasted? It was sweet as a Filipino’s spaghetti sauce. 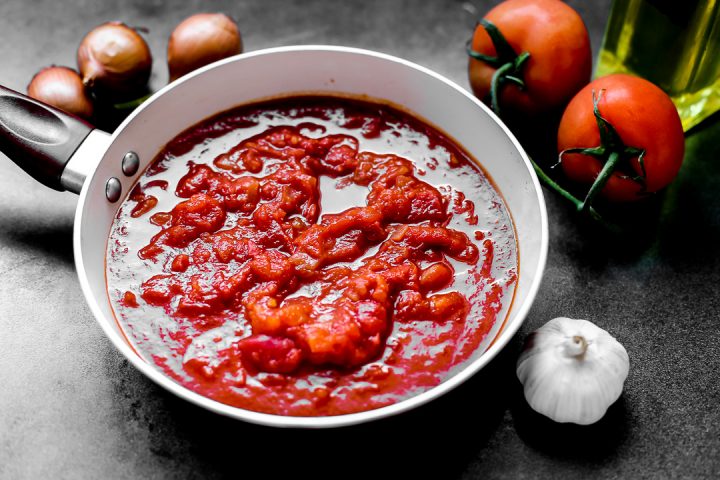 Going back to our recipe, Tomato Sauce by definition is basically referring to any type of sauce made primarily with tomatoes served and prepared on a dish not as a condiment. Commonly used on pasta, pizza and even stews prepared with different meats and vegetables. From here it can be prepared a multitude of ways but the most common one is by cooking tomatoes with sautéed garlic and onion then infused with herbs that brings out the full flavour of tomatoes like basil, oregano and parsley, others add spices like hot pepper and black pepper for an added zing.


It is unsure when did this sauce was first created but there are accounts on when it was first used. It first appeared on an Italian cookbook Lo Scalco alla Moderna (The Modern Steward), by Italian chef Antonio Latini during the 1692. The recipe was called Spanish Tomato Sauce and it was stated that this sauce can be used for boiled meats or whatever. So it means it was not used first on pasta or even a pizza, it just appeared in a pasta on 1790 when chef Francesco Leonardi indicated it on an Italian cookbook named L’Apicio Moderno (The Modern Apicius) which basically was the first spaghetti on tomato sauce. The rest was history and here is my very small insignificant part on that history, my own home made tomato sauce.

You can store this by freezing which will give it a longer shelf life.