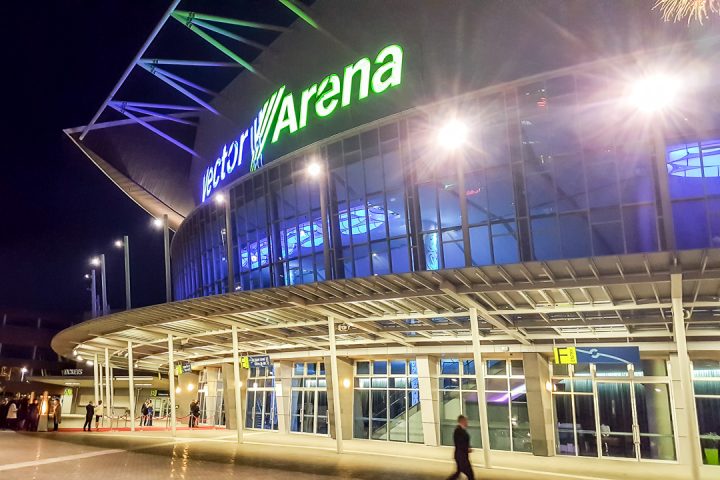 I am employed with the best large scale employer of New Zealand for 8 years and this company is also in the 5 and 10 Year League Awards that is why every year when we party it is party hard all night, awarding the best employees nationwide. Loaded with unlimited booze we start everything slowly from pre ball drinks before the 6PM doors open at Vector Arena.


Every year this ball is themed differently and for this year it was called “Wildside” hence it seems like a jungle inside this 12,000-seat arena usually used for sports and entertainment events. This ball is the largest corporate ball that happens in New Zealand every year, did I also mention its one of the corporate event that consumes a lot if not the most number of alcohol in one night.

It a well-planned event and on my experience the best series of corporate balls I ever attended (bear in mind I was employed by 10 different companies already so I have been to a lot of different ones), from the design of the tables and of the stage, there are even performers everywhere as you enter the premises.

From African themed drummers welcoming you in the red carpet as well as contortionists in amazing costumes of wild animals crawling in the floors. Seating was is quite different this year compared to the past balls where it is set up on round tables, this year is more of a mess hall style but still elegantly laid out. 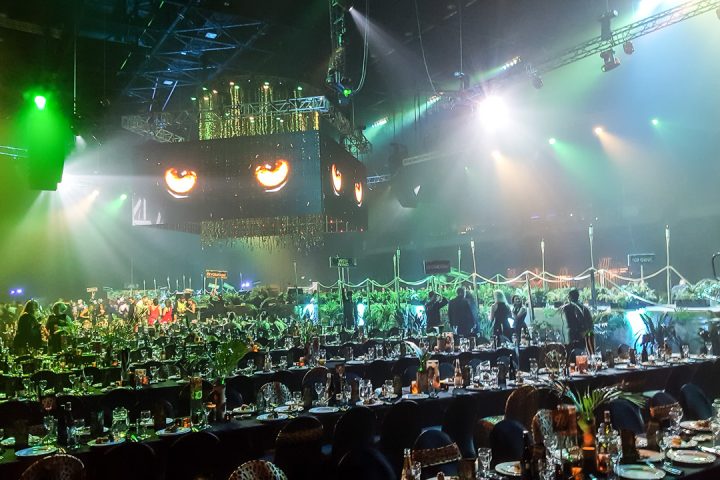 On the tables there were already plated entrees waiting for us together with several bottles of wines, the menu is also printed so we know what we are having.

This is another first on our ball where entrees were already present even before the diners are seated, good idea as sometimes serving a whole arena of people can be slow so a lot of people will end up really hungry even before the event starts. The only problem with this is that the food is already cold, good thing two of the entrees are ok being cold but the lamb would be great if it was at least warm. 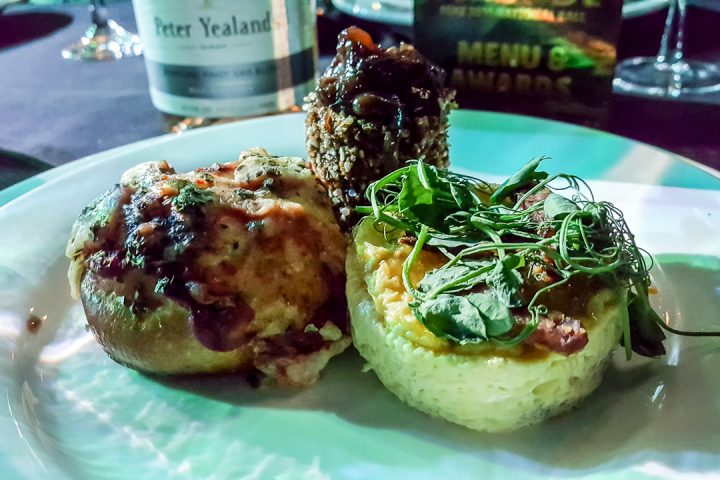 The entrees were great and I loved the flavour the only let down was the pretzel which is quite tough, sliders would be a better option.

then the Omo top, African style rice balls in which both can be dipped in the Moroccan spiced mayo that came with the warm entrees. 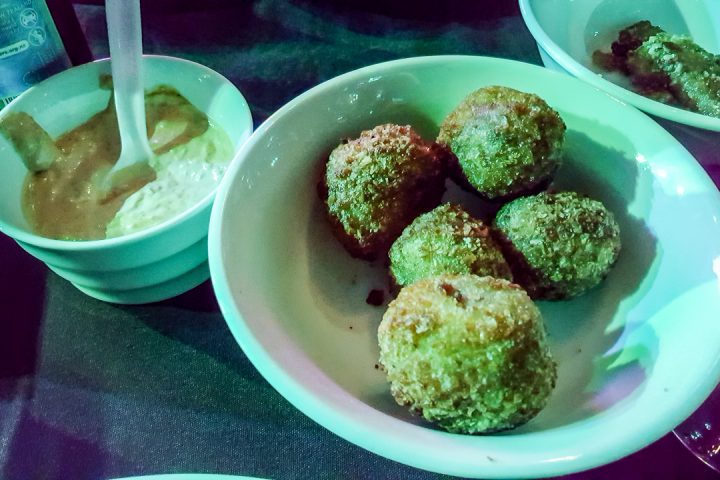 The warm entrees are fantastic, I guess because it’s hot and it’s fried, this is what you need if you had several bottles of beer and wine consumed even before the party started.

Then the awards started, it was a good party atmosphere with boozed colleagues everywhere its one fun event to be in. Halfway the awards the mains started to arrive, most of my colleagues did not bother at all as long as they have a drink in their hands they are happy with it, forget about the mains.

Well I am quite different, I guess most Asians here in New Zealand do, hence most of the non-Kiwis were already patiently waiting for the mains to arrive and once it arrived its chow time. First to arrive was this Chicken tagine with raisin and lemon couscous

Both dishes were amazing specially the beef brisket, it’s the best brisket I ever tried in my life, it’s so soft it melts in your mouth I feel like I have to make this sometime at home. With brisket even if it’s soft you will feel the muscle strands but with this one it just melts. The flavours too were amazing that gravy, well I want to drink it like coffee.

After the mains the awards continues on as well as the drinking, all of the wines on our table are completely dried out but we have 2 bars on both ends of the arena so you can grab as many drinks as you want.

After the awards the dance floor opened as well as the food bar and desert stands where they serve different concoctions of chocolate as well as some cupcakes of Africa; lemon and lime custard tart with toasted coconut; ginger pistachio truffle; and cinnamon coffee cake delice with chilli

Though the dessert station feels like it has an unlimited supply, I think they are limited it’s just too many to be all consumed by everyone, even during the past years I never saw this station empty there’s just a lot of sweet to keep everyone energized for the night.

For the food bar, I did not have a photo of it but the selection were different flavoured pizza baked on premises as well as a good selection of savoury pies. I was so full to try everything here but I gave one type of pizza a try, I chose the cheese pizza and it was heavenly, stuffed with that stingy warm mozzarella and some gorgonzola (as I tasted it), I wanted to have another slice but my stomach cannot handle it anymore.

Again this ball did not failed me or any of my colleagues, year by year it’s a great party a nice time to have fun with people I work with, I bet next year would be even better but till next time I will savour this moment first.