This place was recommended buy a colleague after they had a lunch here one time, I was a bit sceptical at first was it was located in a not so nice place in the Auckland CBD but they were singing praises for this restaurant so I was slightly convinced. Couple of weeks after they dined in again and took some photos of the food they ordered which was really massive for one order in a very affordable price ($10.00 to $15.00) per dish, I was then totally convinced. I never came with them until he took a very long leave and went back home to Hong Kong. Day had passed I forgot about this place until one time I did not have my packed lunch.

With my new colleague we went here, I still did not know where it was but they told me it was beside Auckland City Mission, a soup kitchen here in Auckland. As we walked I was looking at the side because they said the entrance it quite narrow and easily missed, I did not find it so I ended up calling one of our colleagues that dined with him before. He told me it was inside the Auckland City Hotel.


As we came in, it was not bad at all as I had thought, the place was clean, quiet and it looks like your usual Chinese restaurant in Auckland where big round tables with lazy Suzanne dominates the premises. We were then offered to seat immediately and were offered their lunch menu together with a really big bowl of soup.

It was so massive, the first time I had it, I was already full even before our orders arrived. For non-Asians it can be a shock to see this kind of soup as it is served with a big bone section of a pork together with some roughly chopped and vegetable scraps. Even though it was all bones surprisingly it was meaty, in some parts of the Philippines this is already considered to be a full viand, all you need is a plate and some spicy fish sauce on the side.

I have to tell this again the bowl was massive, roughly around 12 inches to 15 inches in diameter and it has a good depth so one of those can serve at least 6 but there were only two of us. We did not finish the soup as we have other orders.


The following dishes below was not consumed in one day but in multiple days we ate here, it was so good I went back more than 3 times during office days and once on a weekend with the family and on each of those visits the combination rice was a main stay as one order alone can easily feed 2 people. 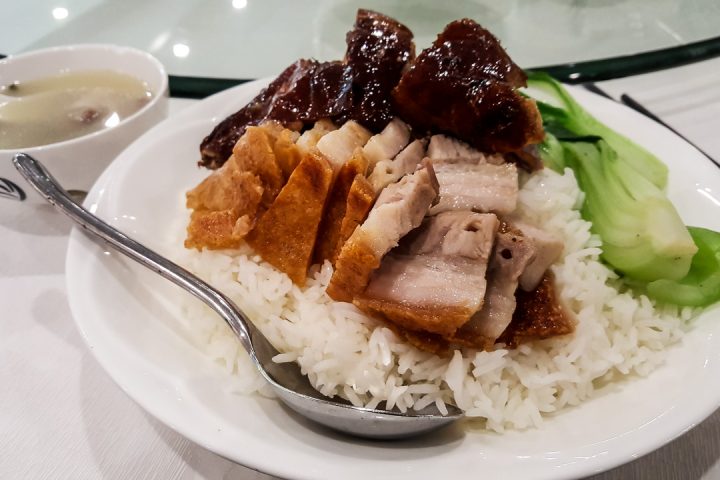 With this rice topping you can order a single, double or triple combination where it can be a different mix of crispy roast pork, soy sauce chicken, roast duck and barbecue pork. They all tasted amazing specially the roasted pork, the skin was so crispy every bite rattles your brain out. It was cooked to perfection and if it’s just not unhealthy I can have a kilo of this easily without stopping.

There was ample rice served with it and it was placed on a matching plate which was quite enormous as well. Another one I tried was this beef noodle soup, it was also good and did not skimp on beef at all! I think there is roughly 300 grams of beef on this bowl. I loved this dish as it’s an exact match for my palette, with a similar flavour profile as my own Beef Noodle Soup less the sweet bit, it was a hit for me.

We also tried other dishes like this pork ribs in black beans sauce, it was twice cooked fried then simmered in sauce, again it was so delicious I want to suck all that flavour out of the bones.  I love the texture on this one, cripsy fried but since it was simmered as well the crispy bits start to become soft on some part.  With this dish I suggest you do take it home to enjoy it the most as eating this in the restaurant will be messy if you start using your hands.

Finally let me tell you about this Vegetables with Fish, Roasted Pork and Tofu, again this was amazing the roast pork cooked in the sauce until the crispy skin becomes jelly like in texture with the fish, tofu and crisp vegetables was a carnival of textures and flavours.

Overall I would recommend this place again and again, I even recommended it to all of my friends and they loved it. Thought the location was not in a prime spot inside the ambiance was great, it’s not as noisy as a usual Chinese restaurant but best of all it was cheap, the quality of food was great and the service was impeccable, one of the few Chinese restaurants where you will be served with a smile.