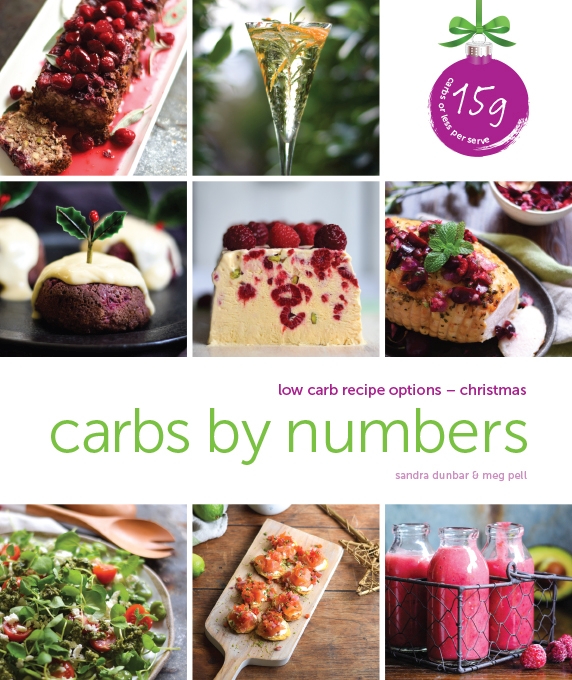 Yes, you can have a low carb Christmas

The carbs by numbers team has delivered, and just in the nick of time.

Anyone wanting to keep their carbs in check and avoid the ‘post Christmas crash diet’ are assured the recipes are also gluten free and diabetic friendly with some that are vegetarian, vegan, egg-free and/or nut free.

From breakfast and mains to party food and treats, the new Christmas book includes meals to make ahead and last minute options. Plus, there is a selection of festive drinks such as Pomegranate and Mint Gin Fizz and Blueberry Mocktail.

All the recipes have 15 grams of carbs or less per serve with some stand-outs in terms of the low carb value such as Cranberry Nut Roast, Roast Loin of Pork with Baked Apples, Cream Cheese Mince Pies, Sherry Berry Trifle and Mocha Cream Truffles.

The new 80-page book also has a stunning full page colour photo for every recipe.

Sandra Dunbar said it took approximately six months to test the recipes and make the final selection for the book.

“When we were doing our first book, 15g carbs or less, we noticed that a festive season-specific book with low carbs didn’t appear to be available,” Sandra said.

“We worked with traditional Christmas recipes and adjusted them to low carb using easily available ingredients. We also tried to include as many vegetarian options as we could in every category.

“Anyone who enjoys a low carb diet won’t need any other book to have a low carb Christmas. Plus, most of the recipes are suitable for year-round use.”

carbs by numbers – low carb recipe options – Christmas was printed in Australia and is available in softback from all good bookstores and at www.carbsbynumbers.com. It has a RRP of $19.95. The eBook is available on Kobo, Amazon and iBooks for $7.95.

In line with this recipe book release Ang Sarap and “carbs by numbers” is giving away one book each (carbs by numbers – low carb recipe options for christmas) to two lucky winners. Competition is open for 2 weeks and we are accept entries worldwide, all you need to do is fill in your details below and tell us what is your favourite low carb recipe by commenting below.

There will be two winners of the following recipe book carbs by numbers – low carb recipe options for christmas.
Entries are open worldwide.
If you are the winner we will be contacting you via email.
Entries will be drawn using Rafflecopter, so fill up the form above.
Prizes will be shipped by the Promoter to your preferred address.