Before everything else let me all greet you a Merry Christmas, hope you are enjoying you day so far. I know it would be hectic for others as you prepare for your dinners tonight and for most Filipinos I guess most of you are still sleepy or have some hang over after that Noche Buena party last night.


For me I am chilling out and relaxing somewhere where the beaches are warm but that does not stop me from posting something today but for me not to be stressed out and have more time with the family we will be making something simple to whip up but still be as festive as other desserts out there hence we are making some Banana Split Icebox Cake today.

Banana Split Icebox Cake is basically a no bake cake made out of layers of graham / malt crackers filled with sweetened whipped cream, bananas and strawberries drizzled with melted chocolate. Icebox cake is popular in the Philippines but we don’t call it like such, we call it floats or royale and definitely it was introduced by the Americans. Popular flavours are Mango and Fruit Cocktail.

Ice box cake originally were made of whipped cream and chocolate wafers, the creation of this dessert was inspired by the charlotte and the trifle and was first created in the United States during World War I. It became really popular during the 1920’s to 1930’s as it’s easy to make and uses supermarket bought items then due to its popularity most of the companies that manufactured the ingredients for making icebox cake like wafers, instant puddings and cream started to print recipes for ice box cake to the back of their packaging. The graham cracker version then came later when Ernestine Emanuel invented it on her honeymoon in Atlantic City, the original recipe includes chocolate and vanilla pudding, sliced bananas and pineapples as the layers.

For our recipe to day we will make it really simple, all I ask is to have a little patience as you have to wait for at least 4 hours for the graham crackers to be soaked an become soft ready for serving. Anyways if you will serving this for dinner you still have time to whip this up.

Banana Split Icebox Cake is basically a no bake cake made out of layers of graham / malt crackers filled with sweetened whipped cream, bananas and strawberries drizzled with melted chocolate. 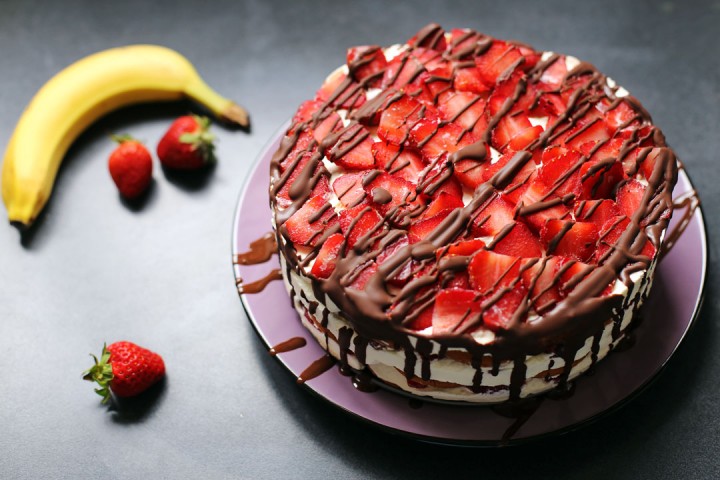