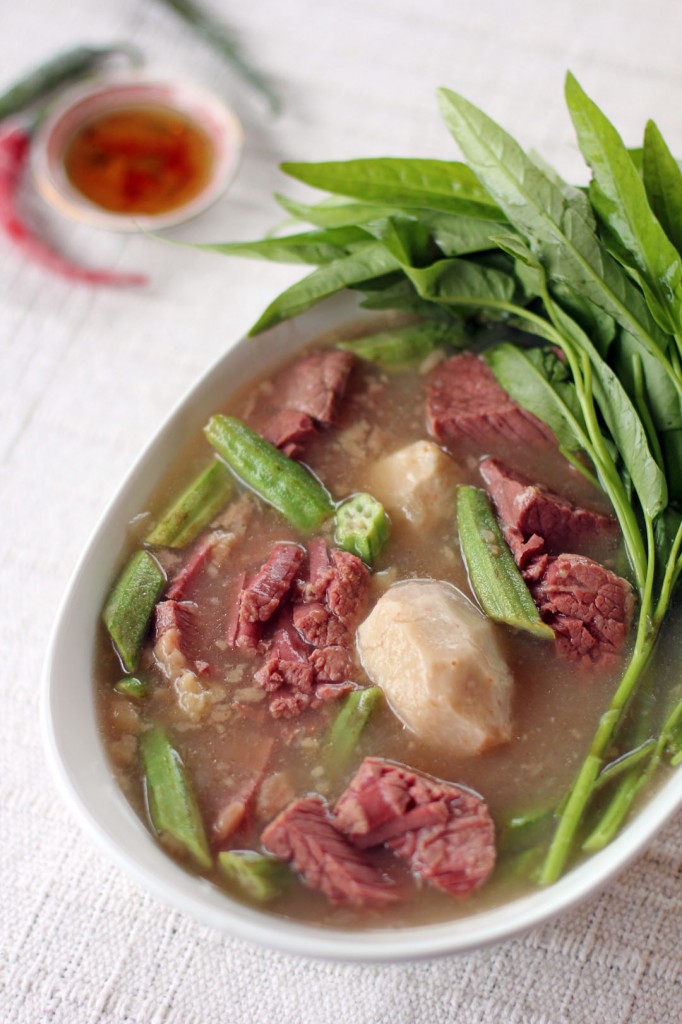 I just recently learned how this dish is prepared and this is probably the 5th time I will be doing this, it is also a recent addition to the Philippine cuisine and I just started to see this during the late 90’s. Basically this dish is similar to how beef sinigang is cooked but using corned beef  instead, I guess main idea here is to mix corned beef flavour and sour sinigang taste which is both loved by the Filipinos. When I first heard of this dish I can’t imagine how it looked and tasted as I haven’t seen it in photos or even served in a table, so initially I visualized it as a canned corned beef with soup and that does not sound right. I guess for a Filipino who haven’t seen this dish yet then they will have the same thinking as corned silverside is not widely available in the Philippines.

I guess I will not define what a corned beef is as it is so popular everywhere; it is even used in different cuisines such as Jewish, German, Irish American, and the Caribbean. Though it is used widely the curing process differs and there are two methods in doing it, one is the wet-curing where beef is cured in spice brine which yields a tender textured meat, the other way is the dry-cured where meat is rubbed with lots of salt but meat is firmer in texture.

The origins of corned beef is still unknown but historians say that it most likely because people before when refrigeration was not yet invented preserved their meats by salt-curing similar to how they preserve fish. The word corn came from and Old English word to describe small hard particles or grains which in the case of corned beef are referred to the salts used for curing. While we cannot determine the early history of corned beef the industrial production was well recorded, and it started during the Industrial Revolution. Ireland used to produce corned beef and traded extensively from 17th to 19th century, and the major consumers are the English, French and Allied Forces. It was a choice of sustenance as it can be stored longer and it was helpful especially for the Armies and colonists.

Many centuries’ later corned beef arrived in the Philippines I guess through the Americans, initially it was called “Carne Norte” which if directly translated from Spanish means “Northern Meat” and I don’t know why it is named like such. This canned food became really popular; I am not sure whether because it tastes good for the Filipino palate or is it because of the Filipino’s “Colonial Mentality during the old times as there was no locally produced corned beef and everything was imported from the Americans having said that since then this was a main stay in every Filipino household’s cupboard. For many years the popular and perhaps the only way of cooking it is cooking it with onions alone or with onions and potatoes (corned beef hash) until recently someone discovered “Sinigang na Corned Beef”. A totally flavourful soup dish mixing the rich flavours of corned beef and sour soup of sinigang but there is one thing to take note on this dish as I made my mistake on my first try, the biggest mistake is the use of ready-made sinigang mix, if possible do not use it as the corned beef already is salty so the best option is to use real tamarind only or processed tamarind which is in form of paste made out of mashed tamarind (you can find this on Asian shops in Malaysian or Singaporean section).