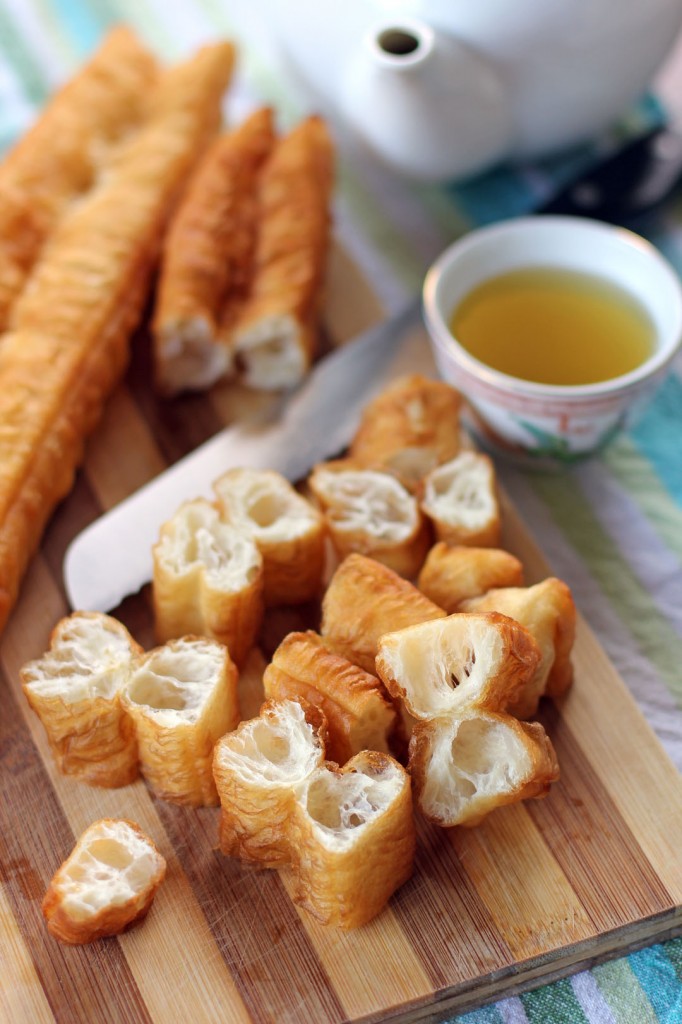 Youtiao, Chinese Cruller or Chinese doughnut are two long bread sticks attached together made up of flour deep fried in vegetable oil, a very popular breakfast dish in China where often served with soybean milk (Dou Jiang). Other common serving suggestions are stuffing it with meat or sliced into smaller pieces then served together with a soup like the Malaysian Bah Kut Teh.

Youtiao dates back to the story of Yue Fei during the Southern Song dynasty. Yue Fei one of China’s most beloved heroes, he was a General during the southern Song dynasty, he was highly known for his intelligence and integrity. A general who is very successful in all of his campaigns including victories against the Jins and once defeated 500,000 strong army with only 800 men.

Yue Fei fought a long campaign against the Jurchens in an effort to recover a large part of Song territory then when he was nearly to attack and retake Kaifeng the corrupt officials advised Emperor Gaozong to recall him back to Hangzhou and initiate a peace process with the Jurchens. What happened is that Qin Hui the prime minister during that period persuaded and instilled fear to Emperor Gaozong advising him that offering a peace treaty with the Jurchens is a better option than fighting them. Qin Hui lobbied that a defeat at Kaifeng might cause the Jurchens to release Emperor Qinzong, threatening his claim to the throne, he then followed the advice and sent the order. Qin Hui together with his wife then thought of a scheme to get rid of Yue Fei by executing him based on false charges.

The people love Yue Fei as their hero so in anger and protest a cook prepared a pair of breadsticks that roughly resembles a shape of a person, he then joined then together and deep fried them, symbolizing the leader and his wife boiled in oil. It was then named as You Zha Gui meaning “deep fried devils” or “deep fried ghosts” and it is where Youtiao originated.