Aristocrat Style Chicken Barbecue is a sweet and savoury charcoal grilled chicken usually served with Atchara and Java Rice. Popularized by the Aristocrat Restaurant this is one of the well loved barbecue in the Philippines.

Mmmmmm. Just the smell of it makes your day. Barbecue in the Philippines is a big deal, in almost every street corner someone sells that charcoal grilled meats. Varieties are endless from chicken to pork, and if that is not enough for you offal such as chicken and pork intestines (isaw), liver, chicken heart, chicken head, chicken neck, chicken feet (adidas) even coagulated pork blood (Betamax) are a popular choice as well. We will not be adventurous today so we will stay with chicken meat for this post.

There are a lot of ways barbecuing Chicken but most of the Filipinos prefer it the sweet style like how the famous Aristocrats Chicken Barbecue is prepared. A good match with Atchara (a green papaya chutney) and Java Rice but before we go to the recipe let’s see how did this humble chicken originated.

Like what I mentioned above this type of Chicken Barbecue was popularized by Aristocrat’s restaurant in the Philippines, founded by Justice Alexander “Alex” Reyes and Engracia “Asiang” Cruz Reyes. This restaurant started as a mobile canteen in Luneta Park (something like the Jollijeep of today’s generation) during the 1930’s. Luneta was a very popular picnic area during those days up until the 1980’s, I can still remember we went there during Sundays to rent bikes and have picnics, it was a go to place for families living in Metro Manila. Having said that there were lots of food cart vendors that sell different food items like hotdogs, siopao and cold drinks, “Asiang” sold something different, the adobo sandwich. As the food carts popularity rises, she then started to think of a name for her mobile restaurant. She first wanted to name it “Andy’s”, after her eldest son but since his son was studying in an elite school, he was not keen with the name. Asiang then asked him why? “Are you ashamed with your aristocratic classmates from Ateneo?” She respected his son’s idea so it was then named as Aristocrat.

Within two years due to its popularity, business was doing really well and they opened a permanent restaurant at Roxas Boulevard in Manila and up until now it is still operating and considered one of the oldest restaurants in Manila. They then opened a branch in Cubao and several other places like a beach resort in Las Piñas. The Las Piñas then posed some problems as people in beach mostly wanted a take away food or something they can easily carry around so barbecue-style meals was served, that started the birth of their now famous Aristocrat’s Chicken Barbecue and the rest was history. 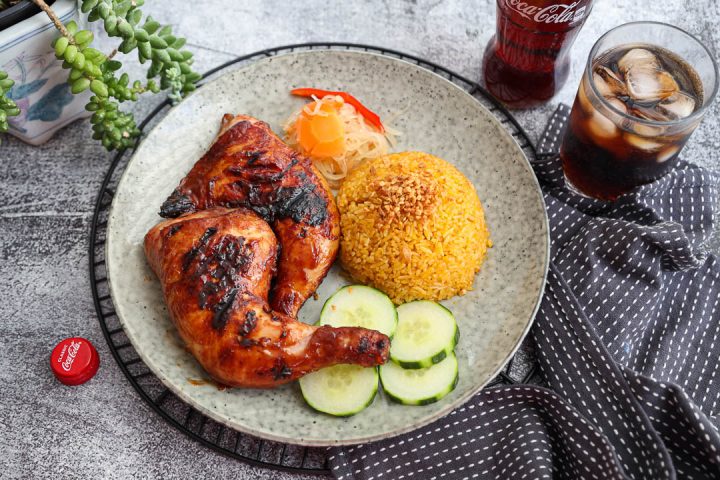 Aristocrat Style Chicken Barbecue is a sweet and savoury charcoal grilled chicken usually served with Atchara and Java Rice. Popularized by the Aristocrat Restaurant this is one of the well loved barbecue in the Philippines.