When in France and you want to have a taste of the most popular French dishes at an affordable price then try La Maison Blanche in Paris.

This is the place we had our first dinner when we were in Paris for our holiday, located near Notre Dame de Paris this is a tourist spot with lots of neighbouring restaurant. Having said that you will immediately think that prices here will be a rip off, well it was the other way around as it is well worth your money for EUR 15.00 per person for a three course meal this is a steal. One might say at that price the food must be crap but it was not, in fact a lot of people loved the place because they serve good food and the staff are really friendly. You can also check reviews in Trip Advisor and Yelp, most of the tourists love their food but service was mixed bag of emotions. 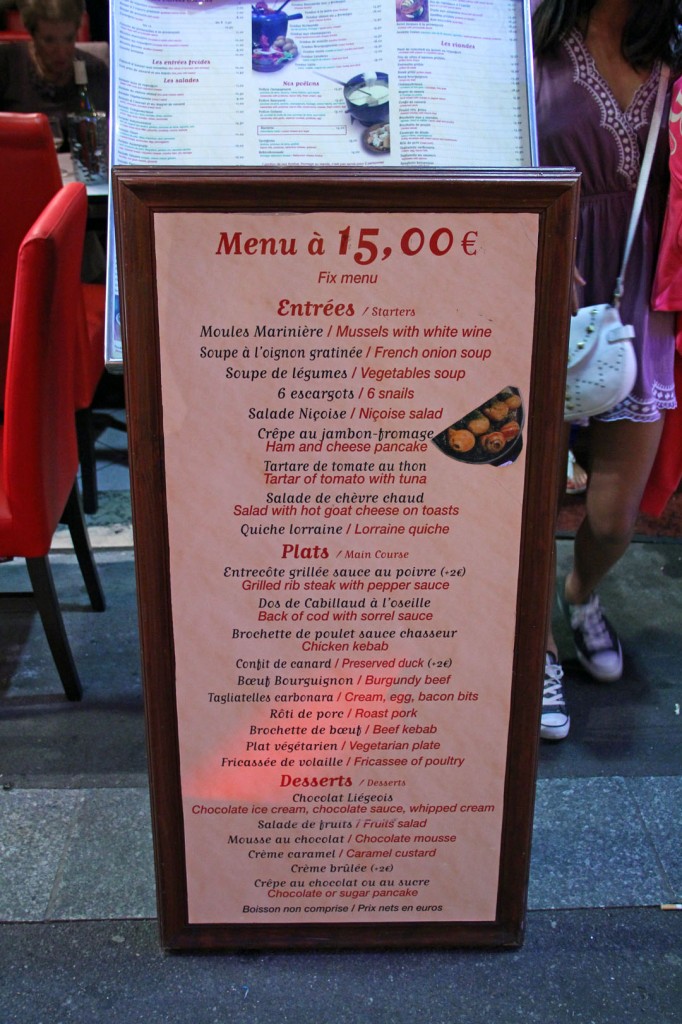 As you can see with the door menu you have a lot of options and most of them are classic French dishes which is good for first time tourists in France. So what did we ordered? Well for entree we go some Moules Mariniere which are mussels cooked in white wine.

Crêpes au Jambon-fromage, French pancakes filled with ham and cheese. This is so heavy for an entree but it was good and cheesy.

Quiche Lorraine which is another cheesy pastry, I liked this more that the crepe it’s cheesy but really silky smooth and light, just look at that slice.

and finally some escargot, which is buttery and garlicky, too bad it was only six pieces.

Several minutes later the mains came out first up was the Tagliatelles Carbonara, again this was creamy.

then the Rôti de porc which is a pork roast served with salad and fries, pork was seasoned well and cooked just right.

Dos de Cabillaud à l’oseille hard to pronounce but be just told them we would love the fish. This is basically back of cod in sorrel sauce.

and the last mains which was Boeuf Bourguignon, the beef was so tender and I so loved the texture of the potato that accompanied it.

Finally the dessert, at this stage were already stuffed so we have to ask them to slow down a bit in serving. First up was the Chocolat Liégeois which is a chocolate ice cream in chocolate sauce served with whipped cream (I forgot to take a picture of this). Then there was another chocolate which is now in a form of mousse, like the ice cream this was really nice the cocoa content on both are high and you can taste the chocolaty goodness.

then another crepe this time the sweet version, Crepe au Chocolat or chocolate crepe. Simple but really nice, the pancakes this time was really thin which is good for dessert after a heavy meal.

And finally some crème caramel which again is really nice.

I think of all the orders we had the only complain I had was the Carbonara, I was expecting a bit more taste from the bacon bits which I didn’t, for me it tasted more like ham. Other than that everything else was spectacular specially at EUR 15.00 what more can I ask for.