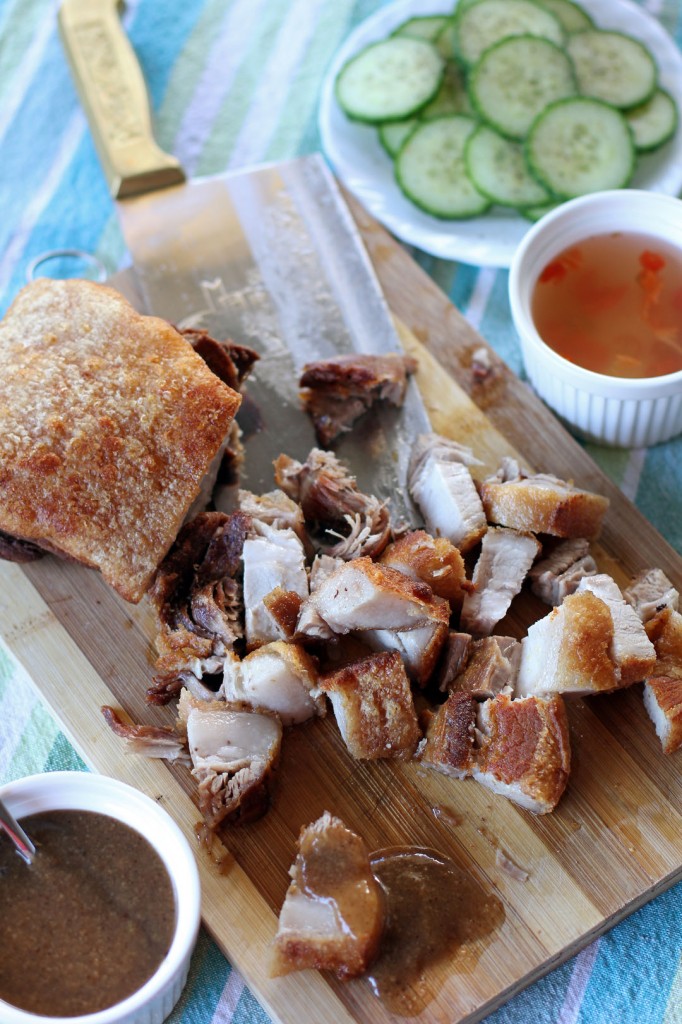 Lechon for those who does not know is a roasted pork dish found in former Spanish colonial countries like Philippines and other Latin American Counties. The term lechon came from the word “leche” which means milk, now how is milk related to lechon? Traditionally they roast suckling pigs which are very young pigs still breastfeeding from mother pigs hence milk, but nowadays they also use a full mature pig so it can feed more people as this is usually served during special occasions such as wedding and fiestas. To prepare this one is a bit of a chore as you need to have a lot of charcoal and patience rolling the pig manually over a very hot spit, I remember when I used to go to provinces in Philippines people take turns in rolling the pig for hours until the skin turn golden crispy brown. But with today’s technology there are a lot of automated devices to do this task.

For this dish we will not roast a whole pig as I don’t have enough family members here to serve it to, neighbours might complain about the smoke, and it’s a very tiresome process, that’s why the Filipinos have invented an easier way of making this dish by just using “kawali” or wok / pan. The effect will be nearly the same where the meat is tender and juicy on the inside and the skin will be crisp, the only difference is the absence of the smoky flavour and the skin is rough in texture compared to the smooth texture of the lechon. This dish is I guess closely related to the famous Chinese Crispy Skin Roast pork and the difference is the cooking method and the dipping sauce it uses a type of sweet liver gravy. The liver gravy may sound gross but this is really good, you won’t even notice that it is made out of liver, I haven’t made my own version as there is an available sauce that you can easily buy commercially at Asian shops.

Another unhealthy yet addictive dish so take this in moderation.