One of my favourite creations this Ferrero Rocher Cheesecake is made out of Oreo crust, cheesecake filling infused with crushed Ferrero Rocher and topped with melted Nutella and chocolate shavings

I had posted a photo of this one on Facebook several months ago and promised for the recipe, well here it is now and my apologies for the long wait as I am timing this post to my lovely wife’s birthday!

Ok, let’s start by describing how I came across this cheesecake. Well every year we have a bountiful (when I mean bountiful it will be a lot, a dozen 30 piece packs is not enough) supply of Ferrero Rocher from my mom as she know that is our family favourite chocolate. Having that supply I was thinking of making a dessert out of it to enjoy our family favourite chocolate in a different way, immediately I thought of making a cheesecake, one of my known specialties 🙂 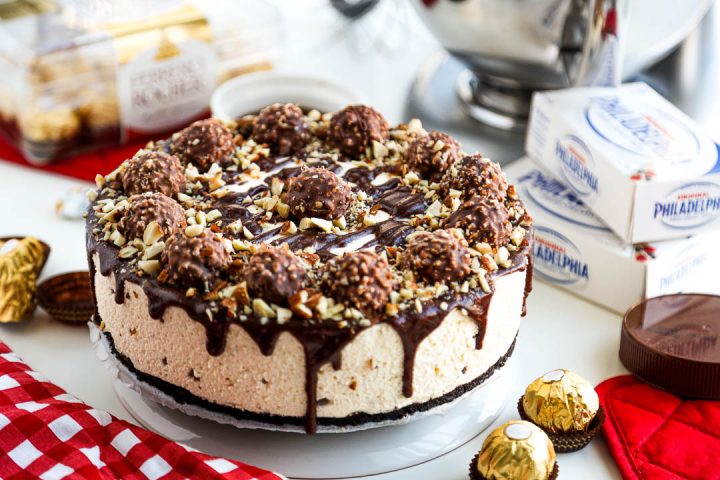 Now to describe what’s on this cheesecake, It is a no bake cheesecake using Oreos as its crust. The cream cheese filling is then mixed with crushed Ferrero Rocher chocolates utilizing stand mixer kept in the kitchen while the topping is a mixture of chocolate shavings and melted Nutella.


Sound great! well it is so try this recipe that I created specially for my wife.  Happy Birthday to you!

One of my favourite creations this Ferrero Rocher Cheesecake is made out of Oreo crust, cheesecake filling infused with crushed Ferrero Rocher and topped with melted Nutella and chocolate shavings