The real sarap to the bones! Max’s Style Fried Chicken is a type of Filipino Fried Chicken dish created by the first owners of the restaurant Max, made by cooking the chicken twice, first by steaming it then deep frying to achieve a nice crisp thin layer of chicken skin with very juicy insides.

Max is a family restaurant in the Philippines popular for its Filipino dishes like kare-kare, lumpiang sariwa, crispy pata, tapsilog, liston kawali and their signature dish the Max’s fried chicken. This restaurant makes real good chicken that’s why their slogan says “Sarap to the bones!” (Delicious to the bones!) as their chicken is so crispy on the outside and tender and flavourful on the inside you tend to lick every meat out of the bone.

For a bit of history, it all started in 1945 after World War II when the American troops based in Quezon City became close friends of Maximo Gimenez. These soldiers occasionally visit his house to have drinks until one day they decided to pay for this drinks as it is becoming a regular event. Since then Maximo decided to open a cafe which served chicken, steak and drinks, chicken was usually prepared by his niece called Ruby and this became popular with the American troops and even locals. This began their popularity until they opened up a restaurant that serves Filipino dishes, they named the establishment “Max” after Maximo. Like Goldilocks, Max is a good place to try Filipino recipes and if you want to try them they have branches in California, Hawaii, New Jersey, Toronto and Dubai; and take note this is not paid ad I just loved their food and how they try to expose Philippine cuisine to the world.

Cooking this fried chicken is a bit different to the traditional way of pan frying or deep frying it as the first step is to steam the chicken before the frying which tenderizes the meat inside then the quick deep fry will make the skin so crispy. A really good fried chicken recipe which I suggest you try out, when I have this I did not bother eating anything with it, just the chicken alone will give you enough satisfaction. 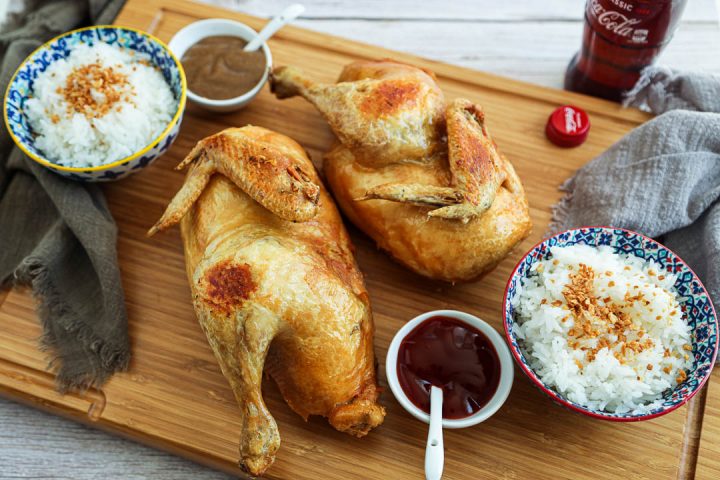 Max’s Style Fried Chicken is a type of Filipino Fried Chicken dish created by the first owners of the restaurant Max, made by cooking the chicken twice, first by steaming it then deep frying to achieve a nice crisp thin layer of chicken skin with very juicy insides.