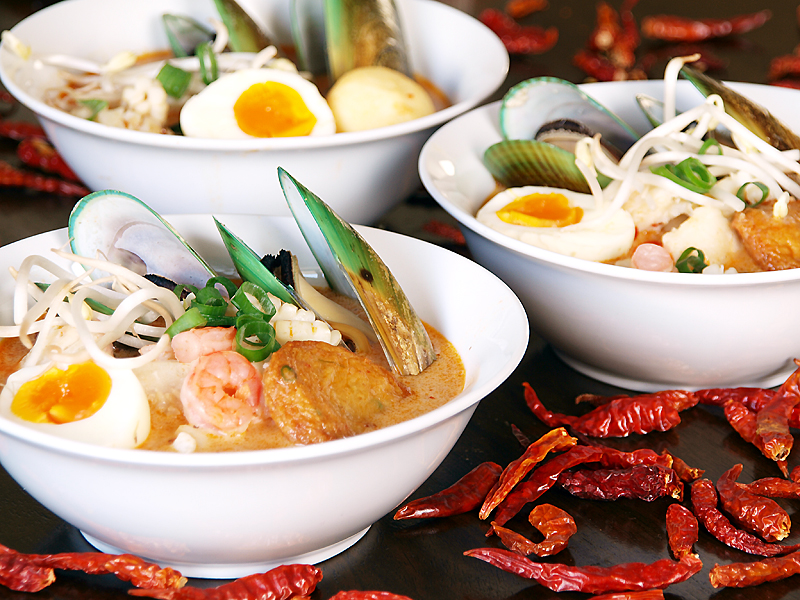 Laksa is a popular spicy noodle soup which is found in South East Asia more particularly in Malaysia, Singapore and some parts of Indonesia. Historians say it was invented in China as the word laksa might have originated from the Chinese word “la sha” meaning “spicy sand” which makes sense as the food is spicy and the way the spices are processed is by grounding them so that they have the same fine but rough consistency of the sand.

Laksa can be categorized into two types which is Curry and Asam, they are both soup based dishes but the difference is that the Curry is made out of coconut milk while the Asam comes from the extract of some sour fruit like tamarind. Different noodles can also be used such as vermicelli (rice and mung bean) as well as the thick rice noodles; it all depends on your preference.

I recently just discovered this dish around 2004 when I lived in Malaysia; at first I don’t really want to try it out because of how it looks (Laksa is not really presentable if you see this dish in hawker stalls), during that time I usually judge food just by how it looks like. My friends and colleagues always ask me to try it out, I always turn them down until one day I let them try my home cooked Sinigang and their reaction was it tasted like Assam Laksa which led me and convinced me to try it out.  We went to this restaurant in Giant Kelana Jaya that specializes in Laksa (too bad I forgot the name), I ordered the one they said tastes like Sinigang and after the first scoop of soup it was Wow! Since then I was not afraid to ugly looking food items as most of them taste better than the good looking ones.