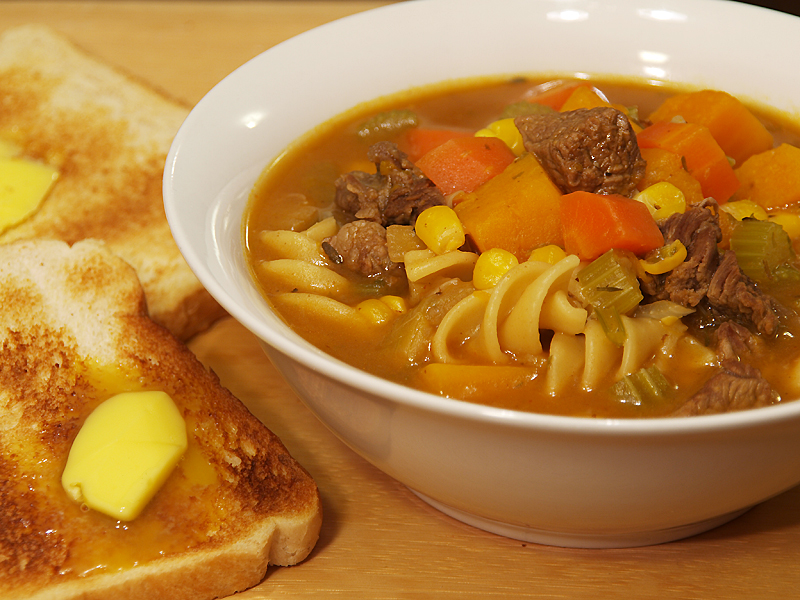 This soup dish is inspired from those large canned chunky beef soups you find in the supermarket, like what I had said before I like making proper meals out of what I see in supermarket ready-made dishes, this is no different.  So on my next supermarket visit I grabbed a can, looked at the photo, confirm ingredients at the back and cook it at home which will definitely taste and look better than its canned counterparts, it will be preservative free as well.


Not sure how this type of soup originated but I always see  it in supermarkets since I was a child, so for this post I guess let’s look on how the soup in general was invented. During the early days boiling was not a common cooking technique until the invention of waterproof containers like clay vessels which happened 9000 years ago, that is why the earliest evidence of soups existence can only be found as far back as about 6,000 BC. The word soup came from the French word “soupe” which then came from the Latin word “suppa” which means “bread soaked in broth”. But during the early days it was not called soup yet and believe it or not it was initially called “restaurant” which means “something restoring”, this word was used to describe a type of soup sold by street vendors which is concentrated and inexpensive, it was advertised as cure to physical exhaustion. Then in 1765 someone opened a shop that specializes in that type of soups which in turn prompted the use of the modern word restaurant to describe the shops. Then the rest is history.

Now for this post it will be a really chunky and simple soup made out of beef and pumpkins, a really good complete meal especially during wet and cold winter nights like what we have here now.