One of the best pastries you will ever have with that nice cup of freshly brewed coffee. Cinnamon Roll is a baked pastrt made with a rolled sheet of yeast-leavened dough onto which a cinnamon, raisins and sugar mixture is sprinkled over a thin coat of butter where it is rolled, portioned and baked to perfection.

Who does not love the smell of freshly baked cinnamon rolls? This was the smell that surrounded our lounge last weekend when I baked this all-time favourite. Cinnamon roll, cinnamon bun or cinnamon swirl is a sweet pastry that is made out of rolled sheet of yeast dough in a cinnamon, raisin and sugar mixture then topped with a sweet glaze.  Other ingredients can be added to the mix like walnuts and chocolates like the different flavours in cinnamon shops like Cinnabon.

This wonderful pastry was believed to have originated from Sweden and it is called “kanelbulle” which directly translates to cinnamon bun. It’s so popular in Sweden they even have a day for its celebration, the “Kanelbullens Dag” which is held every 4th of October and this tradition have been running since 1999. It was started by Kaeth Gårdstedt, who is Hembakningsrådet’s project manager, an association of bread ingredients manufacturers in Sweden.

So if you do not have any Cinnabon from where you are, trust me this is the next best thing or might be even better. A quick and easy sweet, moist and soft cinnamon roll recipe.

Cinnamon Roll is a baked pastrt made with a rolled sheet of yeast-leavened dough onto which a cinnamon, raisins and sugar mixture is sprinkled over a thin coat of butter where it is rolled, portioned and baked to perfection. 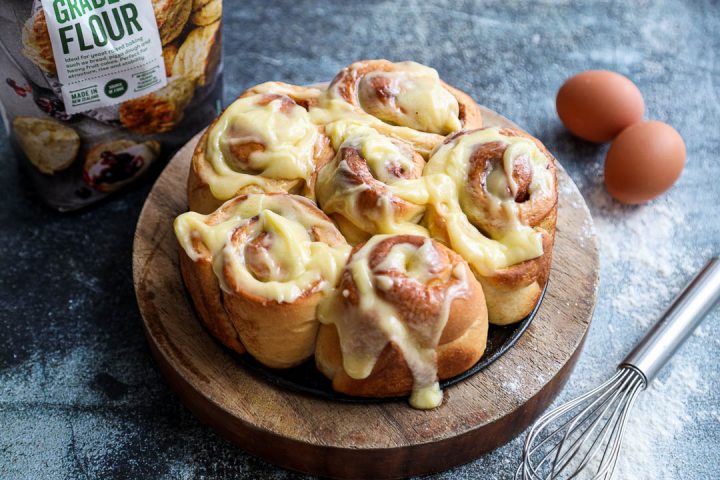