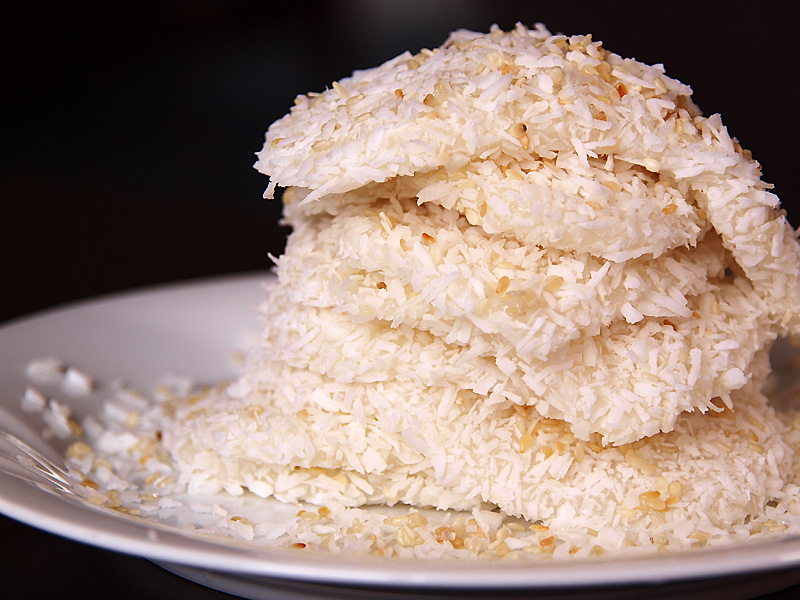 Palitaw is one of the many rice cakes of the Philippines which is characterised by its small and flat shape.  These delights are made out of sticky rice that is washed, soaked, and then ground but due to commercialisation you can now find ground versions sold on Asian Shops.  Palitaw literally means “to float” in Tagalog and its given that name because on the way it is cooked.  Once prepared it will be in a shape of flat discs then dropped into a boiling water, at first it will sink to the bottom but when it is cooked it starts to float to the surface hence the name.  Once palitaw is cooked it is now drained one by one to prevent sticking.  It is then dipped into freshly grated coconut meat then dipped again on toasted sesame seed then one more time in sugar.

Now with the ingredients involved in this recipe of Palitaw,  everything will be a common pantry ingredient except for the freshly grated coconut specially if you are not living in a tropical country like me.   To replace that what I usually do is combining together desiccated coconut and coconut milk / cream.   Which means you just soak the dried desiccated coconut in coconut cream to re-hydrate them back to nearly their original state.

Palitaw is one of the easiest rice cakes to make, preparation is next to none and it cooks really fast (once you drop it in boiling water and it takes only around 20 seconds for each cake to float), that’s why in most of the homes in Philippines these treats are common in being served at tea time.  If you haven’t tried this before, give it a shot, its real easy.  And if you want to serve some unique treats with your guests, palitaw would be a start, it will certainly kick off a conversation, I know as I did it with my Kiwi friends.

This desicated coconut and coconut milk procedure is meant for those where fresh grated coconuts is not accessible, otherwise replace it with grated fresh mature coconut