Shawarma is a sandwich wrap of Middle Eastern origin, usually made out of spit roast shaved meat of beef, lamb, goat, chicken and turkey mixed with tabouli salad and/or fattoush salad, tomatoes and cucumber  This is the Middle Eastern counterpart to the ever famous American Burger where its a staple fast-food item not just in those countries but as well as in Europe.  Shawarma might look similar to other dishes such as the Greek “gyros“, Armenian “Tarna” or the Turkish “doner kebab“, don’t be puzzled as they are all the same just named in their local languages in which all of it means either “to turn”, “turning” or turned”, just like the meat used in Shawarma is prepared.

The traditional way of preparing this is by placing strips of meat on a standing stick then onions and tomatoes are placed on top of the stack for flavouring.  The meat is then slowly roasted on all sides like a vertical rotisserie.  Once the top layer is cooked the meat is shaved off and used for the bread, and the cooking continues.

This dish became really popular in the Philippines late 1980’s, every small entrepreneur wants to own a shawarma shop, that’s why you can see a lot of stalls of shawarma during those times and even now you see remnants of those shops.  But like the usual craze Pearl Drinks, Billiard Halls, Comedy Bars and Frozen yoghurt it had a short life span and eventually went out of fad late 1990’s.  So to relive that moment where I usually queue up hours and hours just for a piece of a wonderful Middle Eastern cuisine I had made this simple recipe which is more suitable for home cooking as I will just use a normal roast beef. 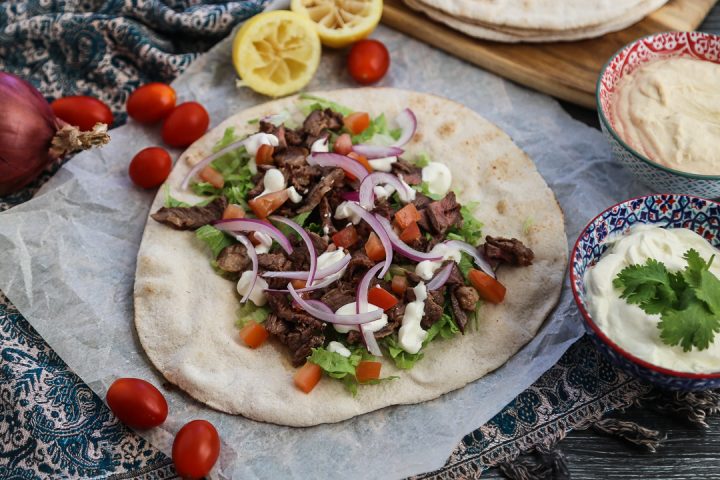