One of most common dish in the Philippines and we can understand why, its easy, its delicious and very affrodable to prepare.

Afritada, also known as Apritadang Manok, is a Spanish inspired dish which can be cooked with pork, beef or chicken slowly simmered in tomato sauce and potato. This recipe is so simple thats why it is a popular dish in Philippines.  Saute, add all ingredients together and simmer. The origin of this amazing Filipino dish dates back to 1521-1898 during the during the colonial era of Spain in the Philippines. The name itself is a clue that it is heavily influenced by the Spanish cuisine, Afritada came from the Spanish word “fritada” which means “fried”. This pan-frying was method introduced by the Spaniards to Filipinos where a small amount of cooking oil is used just enough to lubricate the pan for frying. This method on the name itself gives a big clue on how it is prepared, traditionally Chicken or other meats used on this dish is pan fried before it is cooked in sauce. Modern times commonly omits this process to make the preparation easy, but that affect the outcome, here at Ang Sarap we usually try doing things the traditional way we can like our recipe below. 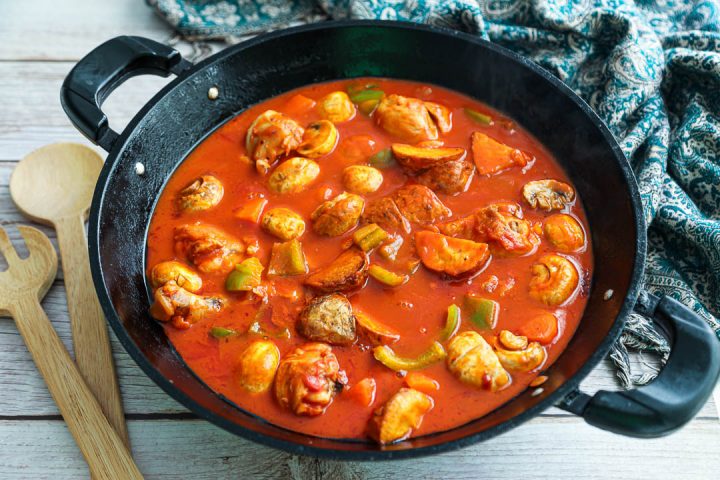 Afritada, also known as Apritadang Manok, is a Spanish inspired dish which can be cooked with pork, beef or chicken slowly simmered in tomato sauce and potato.